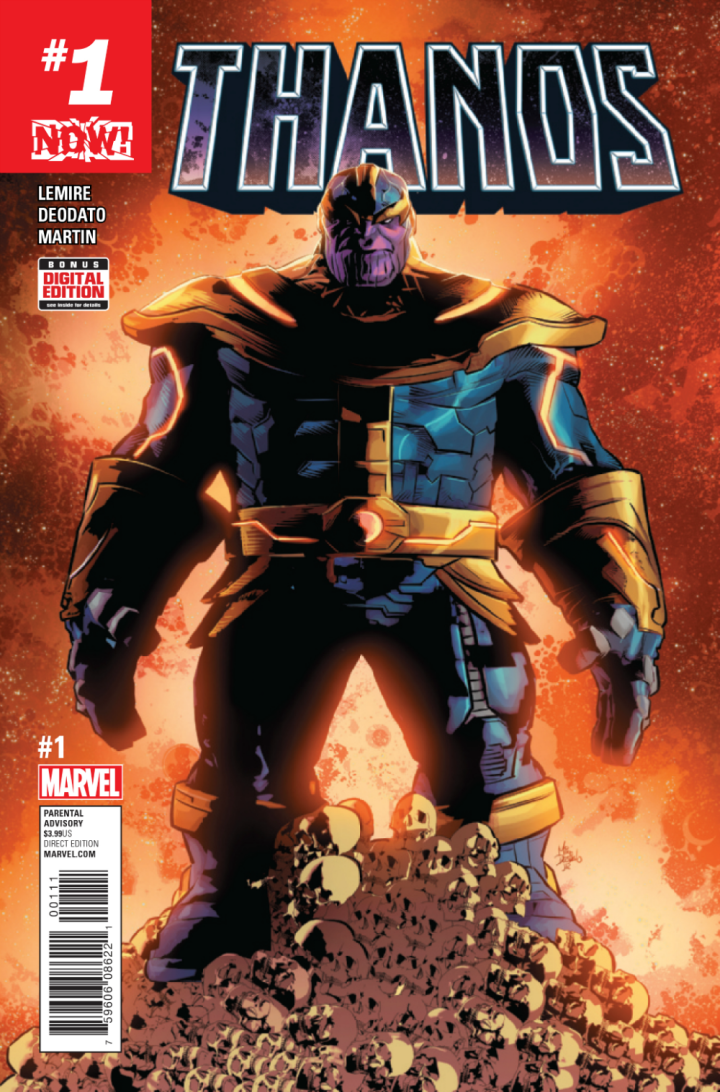 Really?  Thanos is getting his own comic — again?

It’s not the first time Marvel (and other publishers) have made a powerful villain the subject of an ongoing series, but it rarely lasts.  There’s really no endearing quality to Thanos to elicit even a smidgeon of empathy from readers.  He’s a total bad-ass, destroying worlds on a whim, in a never-ending quest to conquer and rule. He’s also got a death wish.  He wants to impress and marry Death, in the person of a woman who doesn’t impress easily. In addition, Thanos is sometimes his own worst enemy.  Does any of that make us warm up to him?  Readers won’t follow a book with a character that they can’t relate to for very long.

It’s been tried with this character before, in a 12-issue THANOS series in 2004 and an even shorter THANOS RISING min-series in 2013.

Maybe the emotion-evoking talents of writer Jeff Lemire can make something out of this, but I suspect he may have met a challenge that will be difficult to overcome. I was disinterested in the story after reading about half-way through the book. That’s not a good sign.

So, what happens in THANOS #1?  After getting involved in Secret Wars, Infinity, and Civil War II (and probably some other epic cross-over events that we’ve already forgotten) and not accomplishing what he set out to do, Thanos returns his attentions to the Black Quadrant, his former kingdom. His former subordinate, Corvus Glaive, took over in his absence. He cleaned things up, recruited more mercenaries to the cause, and ruled in a fair and benevolent manner. Is Thanos happy? Is he grateful? How does he  thank Glaive?  I betcha guessed right.

The opening four pages of the issue fill us in on how generous Glaive was, before it ends with a foot-stomping panel and a big “Thoom!”  The next two-page spread lets us know that “Thanos Returns” in super wide-screen font and rolls the credits.  Couldn’t we guess this without wasting two pages on nothing?  It’s a bit heavy-handed.  Sadly, the whole issue is like that.

Well, maybe there’s someone in the supporting cast that we can rally behind and root for.  Nope.  They are all schemers and manipulators.  As the story progresses, both Thane (son of Thanos) and Starfox/Eros (brother of Thanos) become involved in a plot to take Thanos out of the picture with a little help from brutish newcomer Tryco Slatterius, “Champion of the Universe” (huh). The only thing crazier than that name is his hairstyle.

Oh, and Death makes an appearance - - but I wouldn’t recognize her if she wasn’t identified.  She looks nothing like the cloaked skull face in a feminine form with great legs and other attributes.  This representation of Death looks like Jessica Jones in a jungle outfit. Death has a big secret to share with Thane (spoiler) that will make it easier for him to achieve victory - - Thanos is dying!   Does that mean this is a limited series?

I wouldn’t be too sure. Thanos is a hard guy to put down. They tried killing him during Infinity. He died during a fight with God Emperor Doom on Battleworld. But Galactus accidentally (huh) brought him back to life in Civil War II.

Maybe Marvel feels they need to keep the Thanos name out there, since he’s a big part of the Marvel Cinematic Universe. He’s had cameos during the ending credits of Avengers, Guardians of the Galaxy, and Avengers Age of Ultron and will be a major player in the upcoming Avengers Infinity War.  Does it really matter? Is that connection going to help sell this book?  We doubt that.

We’ve always considered Thanos to be an imitation of DC’s Darkseid.  We decided to do a little research to see if we are right.  We are.

Jack Kirby’s Darkseid first appeared in a cameo in SUPERMAN”S PAL: JIMMY OLSEN #134 (December 1970) and in a bigger role in the debut of THE FOREVER PEOPLE (February 1971).  Thanos’ first appearance was in IRON MAN #55 (February 1973) by writer/artist Jim Starlin.

Starlin says that both Thanos and Drax the Destroyer were characters he created while in college, and finally got a chance to work into comics at Marvel.  He does admit to being influenced in the Marvel versions by Kirby’s New Gods universe at DC.

STORY: The character interactions between the secondary players are not as heavy-handed as the scenes with Thanos, but it all seems a bit tedious.  We really like writer Jeff Lemire and feel bad for him. He deserves better than this assignment. His creator-owned work is much superior in quality and imagination. We did not like this issue. 1.5 POINTS.

ART:  Mike Deodato can usually be counted on for some great visuals, although he has a tendency to rely on photo-realism effects too much sometimes. This issue has some great scenes but looks rushed in others. Some panels have a cut and paste look to them.  2 POINTS

READ AGAIN?  If you think you missed something the first time. But not us. ZERO POINTS.

RECOMMEND?  Can’t come up with anything to justify a recommendation.  If you’ve heard about Jeff Lemire and wanted to read something by him - - please do not start here.  ZERO POINTS.

TOTAL RATING: 4.5 POINTS.  If anything, it’s a good argument for our believing that Marvel just puts out way too many titles every month. Forget this one.