Showing posts from August, 2013
Show all

From the official press release. . . . Bluewater’s Productions will be releasing a new comic book about the life of businesswoman and philanthropist, Melinda Gates. Female Force: Melinda Gates is released on September 4; the comic book will be available in print and digital. Practicing Catholic, Melinda Gates, has dedicated her life to helping women in third world countries gain access to birth control. The Bill and Melinda Gates Foundation have been recognized over and over for its incredible work. Check out this comic book to learn more about this power couple and the work they’ve done to improve conditions for women. Melissa Seymour writes the 32-page comic book with art by Manuel Diaz, featuring a cover by Albert Pessoa. “At Bluewater Productions, we believe that it is important for readers to have inspiring role models, to learn about extraordinary individuals that have overcome challenges to make a difference in the world. That was the thought process Darren G. Davis went throug
1 comment
Read more

For help in planning your activities so you don't miss the events that interest you the most, from our friends at the Convention committee. Baltimore Comic-Con 2013 Panel Schedule! BALTIMORE, MARYLAND - August 29, 2013 - You demanded it and we are ready to deliver -- the 2013 Baltimore Comic-Con panel schedule! This year is even more chock-full of comic book goodness than in the past, with sessions ranging from creator spotlights to industry tutorials, and featuring expanded Children's programming in the Kid's Love Comics area on the show room floor! There is something for everyone! Saturday, September 7 Room 301 11:00-12:00 - Tools of The Trade For Comic Writers Writer of The C-Listers, Jon Jebus discusses some of the technology he uses to write anywhere, collaborate virtually, keep projects organized, and interact with his audience. 12:00-1:00 - Powered by Creators: Bryan J.L. Glass Comes to Dark Horse Bryan J.L. Glass, known for his Harvey Award-winn
Post a Comment
Read more

SUVUDU Universe: A New website for reviews of all popular culture things we love!

By pghhead - August 28, 2013
This site is funded by DelRey Books, but don't let the big publisher creds put you off. They feature fan reviews of comics, movies, television, fiction, magazines, etc. and specialize in science-fiction and fantasy. I'm happy to be a contributor. http://universe.suvudu.com/post/buried-treasured-august-10-2013-more-books-worth-digging-up Please give it a look.
Post a Comment
Read more

from the official press release . . . . . . . Baltimore Comic-Con Adds Brian Wood Courtesy of CBLDF BALTIMORE, MARYLAND - August 27, 2013 - The Baltimore Comic-Con is happy to announce the addition of writer Brian Wood, courtesy of the Comic Book Legal Defense Fund (CBLDF). Wood joins a growing list of creators that will be in attendance at this year's show, taking place September 7-8, 2013 at the Baltimore Convention Center. Brian Wood's first professional work in comics was a 5-issue miniseries, titled Channel Zero, published by Image Comics in 1997. It was created as part of his final project for graduation from Parsons School of Design. In 2000, he was offered a co-writing job by Warren Ellis to join him on Marvel Comics' Generation X. After a 12-issue run on the title, he returned to the world of creator-owned comics where, between 2001 and 2005, he would create such titles as Couscous Express, The Couriers, Jennie One (AiT/Planet Lar), Pounded (Oni Press),
Post a Comment
Read more

By pghhead - August 27, 2013
From the official press release . . . . . . . . VALIANT Brings UNITY to BALTIMORE COMIC-CON with ROBERT VENDITTI, BARRY KITSON and More! This September, Valiant is headed to Baltimore Comic-Con for a weekend packed with special guests, exclusive programming, and convention-only giveaways! On Saturday, September 7th and Sunday, September 8th, join the publisher behind 2013's most anticipated comics event, UNITY, at Booth #1505/1506 for signings and appearances by some of Valiant's greatest talents, including New York Times best-selling writer Robert Venditti (X-O Manowar, Green Lantern) and legendary artist Barry Kitson (Harbinger, Bloodshot)! Be sure to stop by and pick up your copy of the UNITY #1 Preview Edition – an all-new convention-only comic book featuring the very first look inside UNITY #1 by Matt Kindt and Doug Braithwaite! The first issue of all-new ongoing series debuting this November, UNITY #1 is the perfect place to find out why Valiant is the most-talked abou
Post a Comment
Read more

CONSTANTINE: A tamed-down version of HELLBLAZER? 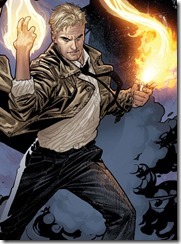 Here’s a link to a recent review I wrote on CONSTANTINE that was posted on the NAMELESS web site. http://namelessmag.jasunni.com/2013/08/15/visual-frights-a-tamed-down-version-of-hellblazer/
Post a Comment
Read more

ONE AND DONE: Something the Big Two Publishers Cannot Do

INDIE COMICS MAGAZINE #7 (Aazurn Publishing, Summer 2013) $6.49 black and white illustrations, 64 pages. Available only through Previews #299 August pre-orders for October 2013 release dates INDIE COMICS MAGAZINE and its’ sister publication INDIE COMICS HORROR have become the best sources for readers interested in independent creator-driven works to get acquainted with some of the artists and writers who are essentially self-publishing and marketing their own creations. With so many choices available for the curious art seekers, INDIE COMICS MAGAZINE is a nice showcase of some of the cream-of-the-crop creators. Every story is prefaced by a short biography of the writer and/or artist and includes web addresses where interested readers can see and purchase more of their works. Unlike some of the other anthology comics available today, INDIE COMICS MAGAZINE publishes no continuing stories or series - - just well-told tales complete in 8-10 pages or less. That makes it easy for new re
Post a Comment
Read more

SECRET WARRIORS VOL. 1 TPB: NICK FURY, AGENT OF NOTHING (Marvel 2008-2009) Story: Brian Michael Bendis and Jonathan Hickman. Artist: Stefano Caselli This was published during the years in which Marvel was cranking out some dynamic books, and could seemingly do no wrong (with a few exceptions). If you need a reminder of the heights of greatness that the House Of Ideas is capable of then pick up this trade paperback. (Just don’t look for much current evidence - - hopefully it’s just a down period and will bounce back). SECRET WARRIORS VOLUME 1 stands as a textbook example of good, solid storytelling. The pacing is perfect. Each chapter brings new revelations and new layers of complexity. But the tale is told is such a style that the reader never gets confused or bogged down in details. You can follow the story in this book without any trouble. The artwork is super-steady and helps maintain the flow. Events here occur just after the end of SECRET INVASION, as S.H.I.EL.D. is dis
Post a Comment
Read more

Sal Buscema to get award at Baltimore Comic-Con

BALTIMORE, MARYLAND - August 9, 2013 - The Baltimore Comic-Con is pleased to announce that legendary Marvel Comics artist, Sal Buscema, will be joining the guest list for the 14th annual show, taking place September 7-8, 2013. Buscema will be appearing at the show on Saturday only and will be receiving the HERO Lifetime Achievement Award, which will be presented at the Harvey Awards Banquet Saturday evening. Sal Buscema got his start at Marvel Comics in 1968, joining his brother John who was already an established artist with the company. Cutting his teeth on such titles as Western Gunfighters, The Rawhide Kid, and The Silver Surfer, he got his big break in 1969 when he took over art duties for Marvel's premiere superhero team, The Avengers. During the course of his career, Buscema has drawn nearly every character in the Marvel Universe, including career-defining runs on Amazing Spider-Man, The Avengers, Captain America, Incredible Hulk, Marvel Team-Up, and Thor. He even worke
Post a Comment
Read more

. . . . . From the official press release . . . . . . Baltimore Comic-Con Offers Interactive Kids' Comics Hotspot with cartoonists, comic creation, capes, and light saber training! BALTIMORE, MARYLAND - August 9, 2013 - Kids 10 and under get in free at the Baltimore Comic-Con September 7-8, 2013 at the Baltimore Convention Center -- and show organizers are once again presenting a kid-friendly comics area, full of all-ages comics, as well as the artists and writers who make them. Creators from such companies as Archie, Scholastic, Disney, Simon & Schuster, Marvel, and DC will be on hand to sketch, say hi, and help to teach young ones about the magic of comics through mini-How-To's through the weekend, right at the Kids Comics Pavilion! Plus, kids can take part in comic crafts, a Jedi Knight light saber training session, and more! Activities in this super cool section of the show include: * Interactive Comics Talks from some of Kids' Comics top creators, such as Jimmy
Post a Comment
Read more

. . . . . From the official press release . . . . . BALTIMORE, MARYLAND - August 6, 2013 - The Baltimore Comic-Con is excited to announce the addition of comic writer and novelist, Joe Hill, courtesy of IDW Publishing, to the growing list of creators for this year's show. In addition, IDW will also be exhibiting at the show and hosting a panel as well! Joe Hill published his first book, a collection of short stories entitled 20th Century Ghosts, in 2005 and followed that up in 2007 with Heart-Shaped Box, his first full-length novel. But Hill is best known among comic fans for his work on IDW's groundbreaking horror series, Locke & Key, which launched in 2008. The book, which is a series of mini-series, is coming to an end with October's Alpha #2, and has been optioned for film by Universal Studios. In addition to Locke & Key, Hill is also the author of the Kodiak, The Cape, The Cape: 1969, Wraith: Welcome to Christmasland, and Thumbprint from IDW. He re
Post a Comment
Read more 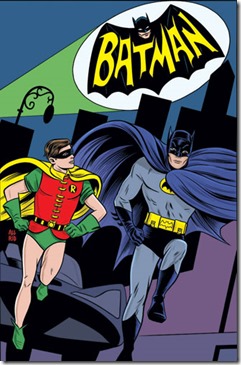 BATMAN ’66 #1 (DC) Jeff Parker, writer. Jonathan Case, artist. For anyone with a nostalgic sense of loss and a craving for the campy and silly BATMAN 1960’s television series, this is the Batman book for you.  As a junior high school student, I used to watch the television show (two shows per week in its’ prime) religiously and loved the irrelevant and mocking approach to a comics legend.  I didn’t resent that then and I still don’t today.  I have fond memories of the series but no real desire to see it again.  Campy doesn’t work in the twenty-first century.  I had a hard time finishing this first issue because I was bored.  That’s not the fault of Parker and Case.  They did exactly what they were assigned to do, and recreated the feel and look of that old TV show perfectly.  I just don’t think this is what the present day Batman fan really wants.  I predict a cancellation after six issues. BATMAN AND CATWOMAN #22 (DC) Peter J. Tomasi, writer. Patrick Gleason, artis
Post a Comment
Read more
More posts