Showing posts from May, 2010
Show all

FCBD: What About The Books? Part Eight 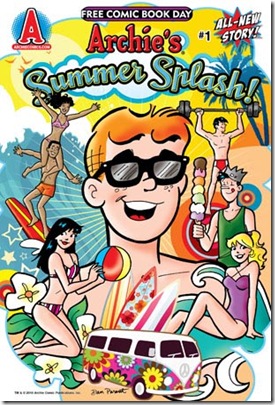 ARCHIE SUMMER SPLASH FCBD EDITION #1  (Archie)                                                     scripts and pencils by Dan Parent         For decades the Archie books  ( ARCHIE, BETTY & VERONICA, JUGHEAD , etc.) have been a great source of light reading and fun entertainment. These whimsical stories featuring universal characters in teen/high school adventures could also usually  be counted on to be non-threatening and free of controversial material.  At least that’s the way this reviewer evaluates them.  Although I’m not a regular reader - - anytime I’ve checked into these titles they haven’t seemed to change (sometimes with a minimal alteration to reflect current clothing/hair styles or references to current events).   Mind you, I’m not counting the recent event with Archie getting married - - which puts a whole new spin on some future stories to come.          With that in mind, I was a little bit shocked as well as pleased after reading ARCHIE SUMMER SPLASH.   In my
Post a Comment
Read more

Crime Story of the Week

From Bill Harris at  Dubious Quality , what he calls the "the greatest lead in the history of journalism": The Brevard County doctor who was arrested for groping a woman while dressed as Captain America with a burrito in his pants will not go to jail.  The full story is  here .
Post a Comment
Read more

FCBD: What About The Books? Part Seven 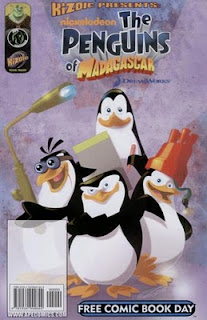 Just a reminder: You may want to go back to Part One for an explanation of my grading system for Free Comic Book Day titles. KIZOIC PRESENTS: PENGUINS OF MADAGASCAR FCBD 2010 / KIZOIC PRESENTS: SHREK FCBD 2010 (flipbook format, Ape Entertainment)www.apecomics.com Aside from Disney's stable of copyrighted characters, some of the more recognizable cartoon characters among today's kids audience are those created through Dreamworks Studios and Nickelodeon Cartoon TV Network. So to put both the Penguins of Madagascar and Shrek together in a flip book is a sure draw for young audiences. I saw many copies of this FCBD title in the hands of younger children while attending the FCBD activities at Captain Blue Hen comics in Newark, DE on May 1st. COVER APPEARL = 3 POINTS. The Peguins are featured in two separate stories, and Shrek gets the same two-story treatment on the flip side of this book. I have to confess that I have never watched a Penguins of Madagascar te
Post a Comment
Read more

FCBD: What About The Books? Part Six 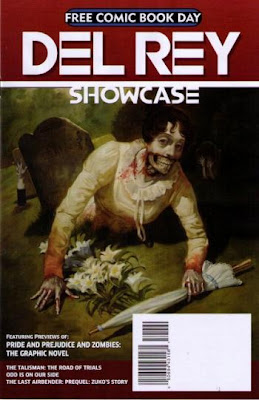 DEL REY SHOWCASE, FREE COMIC BOOK DAY, MAY 2010 Featuring previews of: Pride And Prejudice And Zombies: The Graphic Novel; The Talisman: The Road Of Trials; Odd Is On Our Side; The Last Airbender Prequel: Zuko's Story The concept of blending in a zombie or monster theme into a re-telling of classic literature seemed like a novel concept to me - - and since my son also shared my interest I picked up trade paperbacks of both PRIDE AND PREJUDICE AND ZOMBIES and SENSE AND SENSIBILITY AND SEA MONSTERS many months ago. Neither one of us has found the time to read these books yet, so a graphic novel adaptation of P & P & Z is more than welcome - - - especially since the 10-page preview here is so much fun! Writer Tony Lee takes the original collaberation between legend Jane Austen and current author Seth Grahame-Smith and adapts it for graphic novels. The black and white illustrations by Cliff Richards enhance the story perfectly, and bring to mind memories of some
Post a Comment
Read more

FCBD: What About The Books? Part Five 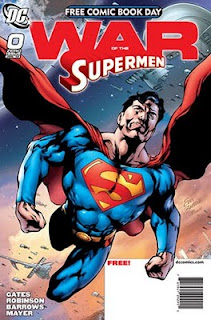 WAR OF THE SUPERMEN FCBD #0 (DC): "War Of The Supermen Prologue" written by James Robinson & Sterling Gates; art by Eddy Barrows "Filling In The Blanks" written by Sterling Gates; with various artists For my money, Batman has always been a more interesting character than Superman. Batman has no super-powers but relies on his intelligence and wits, physical conditioning and skills; while Superman is just the opposite = all-powerful and seemingly indestructible with just a few weaknesses (kryptonite first among them). Because of that, I've had a hard time getting excited about the Superman character. I've read a fair share of Superman issues here and there and rarely are they memorable, one remembered exception being "The Death Of Superman" story lines. So if you're like me and don't feel the urge to read any Superman titles, here's one to make a good effort at changing your mind = the four issue War Of The Supermen mi
Post a Comment
Read more

FCBD: What About The Books? Part Four 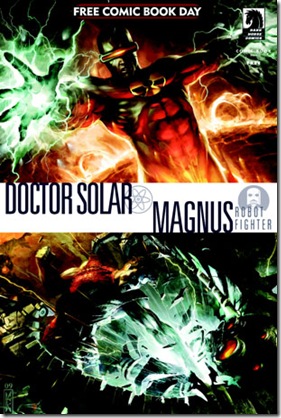 FREE COMIC BOOK DAY: DOCTOR SOLAR, MAN OF THE ATOM/MAGNUS, ROBOT FIGHTER  (Dark Horse Comics)  Jim Shooter, scripts /  Dennis Calero, Doctor Solar art /  Bill Reinhold, Magnus, Robot Fighter art           When I was a very young comics reader the Big Three for me were the super-hero titles from Marvel, DC and Gold Key.  Gold Key had some original heroes and my favorite was MAGNUS, ROBOT FIGHTER ,  followed closely by MIGHTY SAMPSON .  While I enjoyed the few Doctor Solar books I read, it wasn’t a title that I went looking for.          In the 1980’s then editor in chief Jim Shooter left Marvel and shortly after started up Valiant Comics, buying up the rights to some Gold Key properties and reviving them.  I suddenly took an interest in DOCTOR SOLAR, MAN OF THE ATOM due to improved storylines and some very dynamic artwork from Barry Windsor Smith.  The re-boot of MAGNUS, ROBOT FIGHTER was equally worthwhile.   The Gold Key heroes were back but they didn’t stay very long this time
Post a Comment
Read more

FCBD: What About The Books? Part Three

(For an explanation of my FCBD book rating system, see my article from Sunday, May 09, 2010 titled "FCBD: What about the books? Part One".) RADICAL FCBD 2010 (Radical Comics) previews of DRIVER FOR THE DEAD, TIME BOMB, AFTER DARK, and THE RISING If you are unfamiliar with the works of Radical Comics this is a great place to start for a good overview of their current offerings - - - and you can't beat the price - - - FREE! - - no risk to you other than the time spent. In their short history RADICAL has earned its reputation (with me at least) for high quality works with gorgeous (usually painted) art and production values. Rather than publish ongoing monthly series, RADICAL concentrates on limited series in various genres: fantasy, science-fiction, horror, crime, western, etc. The FCBD issue covers one horror tale and three science fiction stories. Each of the four limited series previewed in RADICAL FCBD 2010 is worthwhile - - and I'll be following two of
Post a Comment
Read more

FCBD: What About The Books? Part Two

For an explanation of my FCBD rating system, see the article "FCBD: What about the books? Part One" from Sunday, May 09. FAME LADY GAGA / THE PUPPY SISTER FCBD flipbook (Bluewater) FCBD titles with multiple and different stories are a real challenge for my ratings system, but I've handled it already (see last posting). If there is at least one worthwhile story in the bunch then my ratings will reflect that good story more rather than the bad apples so that readers won't overlook the title and decide not to taste it. The latest in a series of biography books from Bluewater Productions, FAME begins this month with the LADY GAGA issue. The FCBD edition contains an eight-page preview of LADY GAGA as well as a five-page preview of the TAYLOR SWIFT bio scheduled for July release. I haven't read all of Bluewater's biography titles (FEMALE FORCE, POLITICAL POWER, etc.) but the ones that I have were all different. These book
1 comment
Read more 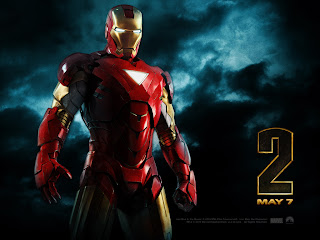 I saw "Iron Man 2" over the weekend. I'll save the detailed review for later when more people have seen it, but I thought it was a really smart movie with lots of well thought out little details and I liked it as much as the first film. The acting, of course, was first-rate and there were some fun references that will probably pay off in "Captain America", "Thor" and "Avengers". Make sure you stay for the scene after the credits.
1 comment
Read more

FCBD: What about the books? Part One 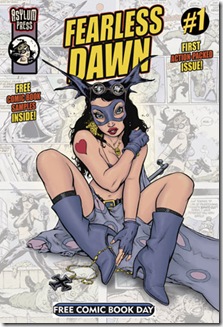 In my last posting I wrote about Free Comic Book Day (FCBD) as an opportunity for comic shop owners to promote their business as well as grab the attention of new and younger readers.  By the same token, FCBD is an opportunity for comics publishers to draw attention to their products and create interest, hoping to obtain new readers as well.           In this and several other postings, I’m going to look at the FCBD titles and see how well they accomplish that goal, as well as review the story and art.  Since I’m feeling a bit authoritarian this weekend, I’m going to establish a ratings system for FCBD titles and get judgmental all over them.  Here’s an explanation of my system: COVER APPEAL:  0 – 3 points.   If the FCBD titles were displayed in a glass case and the reader could only chose a few,  which ones would they be?   In the case of unfamiliar material, that choice would largely be made on the appeal of the art or cover design/content. STORY:  0 – 3 points. H
3 comments
Read more 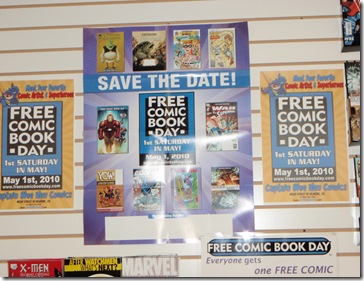 Opinions and evaluation from a long-term fan, based on the belief that the future of this original American art form is dependent on a steady influx of new and younger readers . . . . . .           If you share that belief and agree with me, then you probably view Free Comic Book Day   as an opportunity to grab the attention of those prospective readers and attempt to make some converts to the cause.   And, as you may suspect, the degree of success attained is most often in direct proportion to the amount of effort and creativity each individual comics shop owner and staff apply to this special day.   Free Comic Book Day is but a template or outline, and those who seize that opportunity and plan and create a special event that builds off that platform have a chance to realize new goals.   We can only hope that the majority of comics shop owners understand the power behind Free Comic Book Day and act accordingly.                     I’ve been visiting my local comics source on
Post a Comment
Read more
More posts