Showing posts from December, 2012
Show all

Over the holidays, I had the chance to visit the "Heroes & Villains: The Comic Book Art of Alex Ross" exhibit at the Norman Rockwell Museum  in Stockbridge, MA. Ross' art is familiar to many comics fans, but the exhibit is an opportunity to see it up close at original size, and also to see his early work and influences. The selection of his early work includes some fun crayon sketches from Ross' childhood, and even some homemade action figures. But where the exhibit really shines is in showing the influences on Ross' work. There's some wonderful 1960's art from Ross' mother Lynnette, a commercial artist and fashion designer, and you can definitely see the resemblance to her son's style. The highlights are originals from influence Norman Rockwell, including the original of a 1968 Look magazine cover that the "Justice" trade paperback cover was based on, and even a couple of Andy Warhol originals! I particularly enjoyed the sectio
Post a Comment
Read more 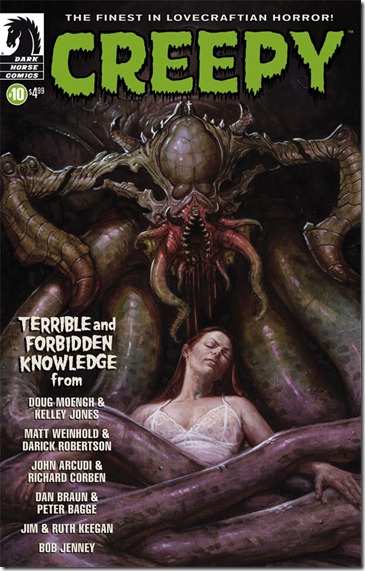 CREEPY #10  (Dark Horse,  October 2012) was one of the best issues so far of the revived comics-sized version of the late, lamented classic CREEPY magazine from the 1960’s –1970’s.  I highly recommend this issue to anyone with a serious interest in the Lovecraft mythos.  I wrote an extensive review, which was recently posted to the Nameless Magazine website. You can read the full review here . . . . . . . . . http://namelessmag.jasunni.com/2012/12/22/visual-frights-lovecraft-creepy-style/
Post a Comment
Read more 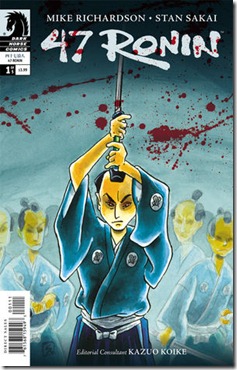 47 RONIN #1 of 5 (Dark Horse, November 2012): Anyone interested in feudal Japan and tales of samurai honor will want to read this adaptation of the classic Japanese legend. Dark Horse founder and publisher Mike Richardson has been contemplating a comics version of the tale for over twenty-five years. Recent events occurred to prompt him to script it himself after finding the ideal artist partner in Stan Sakai. In eighteenth century Japan a powerful landholder, Asano Takumi-Naganori, is summoned by the Shogun to help prepare for some visiting envoys from the Emperor. The Shogun has appointed a court official to instruct Asano and others in proper court etiquette. However, the Shogun’s palace is rife with corruption. Bribes are commonplace.” Court official Kira Kozukenosuke Yoshinaka confronts Lord Asano and demands an additional “gift” as proper compensation for the training. Offended by the suggestion, Asano stands his ground and refuses to pay the bribe. Things become more diffi
Post a Comment
Read more

from the official press release. . . . NOTE:  This is the return of the original VIRGIN COMICS line-up, a short-lived comics company that put out some quality work.  I highly recommend GAME KEEPER and 7 BROTHERS. I have these series in the print editions . NEW “LIQUID COMICS” APP FEATURES  DIGITAL COMICS FROM FILMMAKERS GUY RITCHIE, JOHN WOO, BARRY SONNENFELD & MORE ~ App Debuts at Number 4 in the App Store Charts for iPhone Free Book Apps ~ NEW YORK, NY— December 20, 2012 – Just in time for the holiday season, Liquid Comics launched the new“Liquid Comics” app today for the iPhone and iPad. The app quickly rose to number 4 in the App Store charts under iPhone free book apps.       The app is available now for download at:                         https://itunes.apple.com/us/app/liquid-comics/id573193876 The app is loaded with free comics and videos from leading creators from both comics and Hollywood including Guy Ritchie, John Woo, Barry Sonnenfeld, Shekhar Kapur, Grant Morr
Post a Comment
Read more 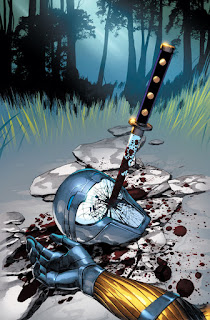 X-O MANOWAR #5 – 8 (Valiant, September through December 2012) Writer: Robert Venditti. Penciler: Lee Garbett. Inker: Stefano Gaudiano. Colorist: Moose Baumann. Letterer: Dave Lamphear. Writer Robert Venditti has now completed the foundation and framework for a bigger X-O Manowar structure and seems ready to take the title forward in a big way. I sense something complex is in the works for this book, and I’m not just referring to the upcoming Planet Death storyline that Valiant has already been publicizing. If you’ve been following this book since Issue #1 then you know that Venditti slides little revealing asides into the story in various places. These interesting bits of background and character information have a way of adding special meaning to later events in the book. For example, the baby abductions and replacement alien replicas in Issue #1 help us understand how the Vine (an appropriate name) has spread their tendrils throughout all facets of modern civiliz
Post a Comment
Read more

Recent Readings: Judge is no Joke 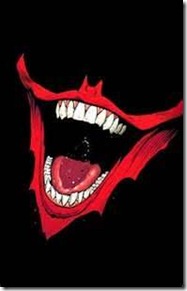 BATMAN AND ROBIN #15 (DC) “Death Of The Family” – I just wanted to take another peek at this crossover storyline. Just to make sure it’s worth my getting the trade paperback later. It appears to be so. Robin has been directed by Batman to “sit it out” and monitor the proceedings from the Batcave. Of course, the “little big man” has his own ideas of how to best use his skills and turns them towards finding the abducted Alfred. Naturally, the trail leads him right to the Joker. The Joker as depicted by Snyder, Tomasi and others is madder than ever and even more unpredictable. Tomasi is hinting at an extreme sense of possessiveness that Joker holds for Batman, and a resentment towards the attention he devotes to his “family” members. Classic lines here from the Joker: “The Batman I know and love has more PEZ in the dispenser - - but you all keep pushing his head back, reaching down his neck and taking more than you deserve until one day he’ll be empty and have no PEZ left to give poor
Post a Comment
Read more 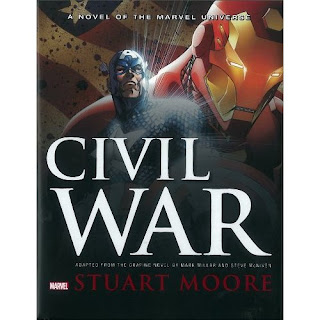 Marvel's started a new line of prose novels adapted from some of their recent, but classic, storylines. First up are "Civil War" and "Astonishing X-Men", with "New Avengers" coming in early 2013. These are attractive hardcovers, a little wider than standard and on bright white paper. (They'll be issued as paperbacks later too.) Since these are based on comics you've probably already read, there are spoilers below. "Civil War" by Stuart Moore: Former Vertigo editor Moore is the editor of this line, so he's up to bat first. The advantage of a novel is that it lets us into characters' heads in a way that's hard to do in comics. Moore does this well, focusing on Captain America & Iron Man of course, and also Spider-Man and Invisible Woman. However, I don't think he does a great job articulating Cap's position before Tony gets all fascistic and Bill Foster dies. To be fair, that's also a weakness in the orig
Post a Comment
Read more 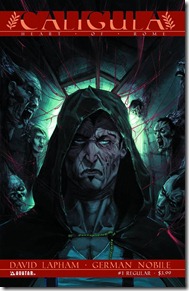 PGHHEAD’S NOTES:  I know of at least two of the BC Refugees crew that are big David Lapham fans.  I post the following article here as a public service “heads up!” message . . . . . From the official Avatar press release . . . . . . . . . . . While many are pointing at December 21 (12/21/12)  some people interpret the Mayan calendar to predict this Wednesday,  12/12/12,  to spell the end of the world as we know it.  But, David Lapham feels fine. The Eisner Award-winning author has three of his own personal series hitting comic shops this Wednesday, all published by Avatar Press.  In addition to the debut of Caligula: Heart of Rome - the sequel to his supernatural horror tale set in ancient Rome - Wednesday will also premiere the trade collection of his original Ferals werewolf crime/horror comic series, and the most recent issue of his gonzo detective series, Dan The Unharmable #8 . Having been in the comic industry for over twenty years, Lapham has worked with Marvel, DC, Dar
Post a Comment
Read more Those who know of my comics-buying habits are aware that I don’t like to add books to “monthly pull lists”. I don’t want to be stuck reading a title I’ve stopped enjoying due to a writer/artist change or because it simply no longer holds my interest. For most readers, that’s not an issue. They simply cancel the title and just end up with 2 or 3 issues that they don’t like. However, because I don’t always get to read books I’ve ordered until months later I’d be “stuck” with more than just a few copies. So I continue to order in advance just those books that I feel will be worthwhile in a single month. That also leaves me breathing room to indulge my other comics-buying inclination: picking up books solely on impulse. I don’t want to ever stop doing this. Some of my favorite reads and discoveries have been books I never intended to order yet picked up off a comics shop shelf purely on the whim of the moment. It also provides me an excuse to continue to frequent comics stores just to ha
Post a Comment
Read more
More posts