Showing posts from January, 2017
Show all

EDITOR’S NOTE:  Sink is one of the titles recently previewed within our features on indie publisher ComixTribe.  It’s the book we are most excited about from the 2017 releases from ComixTribe.  CAUTION: Not for everyone. Graphic scenes of violence. See details below from creator John Lees . . . . . Hi there, friend-o... You're in the van with the rest of us clowns. Now it's time to take that van on the road. On a World Tour, to be precise... The SINK World Tour Kickstarter is now live!!! Go to . . . .  https://www.kickstarter.com/projects/comixtribe/sink-1-welcome-to-glasgow-world-tour?ref=dgfyxs And you're one of the first to know.  You got in right on the ground floor of this crazy project because you believed in it and believed in us, so I want you onboard the World Tour on Day 1.  There will be awesome prize giveaways each day of the campaign, and the earlier you back the campaign, the more chances you'll have to win! Click here to back the SINK World Tour
Post a Comment
Read more 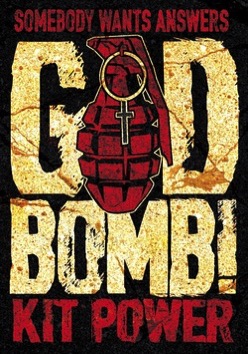 GODBOMB! by Kit Power  (Sinister Horror Press, September 2015 release) ISBN # 9780993279393.   Disclosure: A digital copy of GODBOMB! was provided by the author at no charge as part of a Goodreads promotional group read, with the hope of an honest unbiased review.        Writer Kit Power’s debut novel is an impressive examination of individual reactions to a shared event that puts the reader directly into the characters’ heads, sharing their deepest thoughts and fears.         GODBOMB! is an intense reading experience that raises a lot of questions about religion and faith, and doesn’t attempt to answer them or persuade the reader to change their own beliefs. Author Power skillfully poses the questions without letting the reader learn of his own personal philosophy. GODBOMB! doesn’t preach. It just brings up these subjects while engaging the reader in an edge-of-the-seat page-turner. It’s a high suspense tale that fits within the horror genre, but is more of a thriller with horr
Post a Comment
Read more

EDITOR’S NOTE: Continuing our features on indie publisher ComixTribe, courtesy of publisher Tyler James . . . . .   Recently, I shared a little bit about what makes ComixTribe different .   Today, I want to tell you about something we're most proud of... Our hardcovers.   It's a beautiful, brilliant world we live in where scrappy small-presses with a small but fiercely loyal fan base like ours can put out deluxe, over-sized hardcover collections on par with much bigger publishers with much more resources.     The ComixTribe Hardcover Collection is something that makes us stand out at conventions.   And while we give out a ton of digital comics and digital is awesome, I truly believe that it's when fans get their hands on the best of what we have to offer, in print, in hardcover format, that they truly appreciate what ComixTribe is all about. (Maybe I'm just old school like that.)   Unfortunately, we can only get to so many conventions, and retailers a
Post a Comment
Read more

From the official Pro Se Press release . . . . . . Author John Achor’s popular Arkansas based amateur detective is back!  FIVE-SIX, DEADLY MIX, the third Casey Fremont mystery, is now available in print and digital format from Pro Se Productions.   Casey Fremont has a knack for solving mysteries… She also has a habit of ending up in danger…and this time both may get her killed!   In FIVE-SIX, DEADLY MIX, Casey Fremont lands in the middle of a combined local police/FBI investigation into fraud and theft at a local hospital. Also, Two women have suspiciously fallen to their deaths before Casey reports for work in her undercover role. Once again, Casey brings her roommates, Effie Tremayne and Aaron Kincaid, along to lend a hand.   As usual, the rest of Casey’s life is in turmoil as well. Love interests shift and change, someone close to Casey falls ill, and she receives a visit from an uncle she’s not seen in years. This all forces Casey to make d
Post a Comment
Read more

Valiant Adds 10 New International Publishing Partnerships Titles from Publisher’s Award-Winning Library Now Available in China, India, Korea, Pakistan, and More Valiant is proud to announce that it has added 10 new foreign publishing partners to its extensive international publishing program that will bring its library of critically acclaimed titles to several new territories around the world. Adding a robust roster of foreign-language deals throughout Europe, Asia and the Americas, Valiant is building its fanbase across even more international markets, where readers can now look forward to the adventures of X-O Manowar, Bloodshot, Faith, Archer & Armstrong, and Valiant’s other globally recognized icons in a new array of languages including Korean, Mandarin, Portuguese, Russian, Spanish, Urdu, and more in print and digital via these newly announced publishing partners:   CFx (Pakistan) Now Available Digitally http://www.cfxcomics.com China Mobile (China) Now Available Digitally
Post a Comment
Read more

EDITOR’S NOTE:  We continue our spotlight on ComixTribe with some words from the publisher . . . . . . . I so appreciate your time and attention this week as we've been sharing what what's coming from  ComixTribe  in 2017. I've heard back from a number of you pumped about   THE RED TEN  coming to a close , and many more fired up about the   SINK  campaign  launching next week. Click here for SINK Sizzle Reel. https://www.facebook.com/ASinkTale/videos/244191642673244/ We've also been shipping  CHUM trade collections   with free mystery bonus comics included in every order (this week only) to many of you. As  ComixTribe  moves forward in 2017, I want to take just a moment to share a few thoughts on what makes  ComixTribe  unique in a crowded marketplace, and give you some awesome links to back that up.  What Makes ComixTribe Different? In case you haven't notice, the comics market is a crowded one. Standing out is as hard as its ever been... And as a result
Post a Comment
Read more

EDITOR’S NOTE:  More updates from Tyler James, ComixTribe publisher.  The process of creating and publishing indie comics can experience several delays when you’re not able to devote full time to the process, and have to rely on a day job for your income. Some insights from James below . . . . . . . . I love talking about new projects, as I've been doing this week.  The   CHUM trade collection  is gorgeous and   SINK is going to break records   for us later this year... But a lot of you have one question in mind... What About THE RED TEN? Many readers very first experience with ComixTribe came from picking up a little book called  THE RED TEN , which is a superhero murder mystery in ten parts.  At cons, I pitch it as  "How I Would Kill Off The Justice League if DC was CRAZY Enough to Let Me." (They still are not.) If you haven't read  THE RED TEN , and that concept sounds at all intriguing, here's a FREE Download of  THE RED TEN #1  to check it out.   C
Post a Comment
Read more
More posts