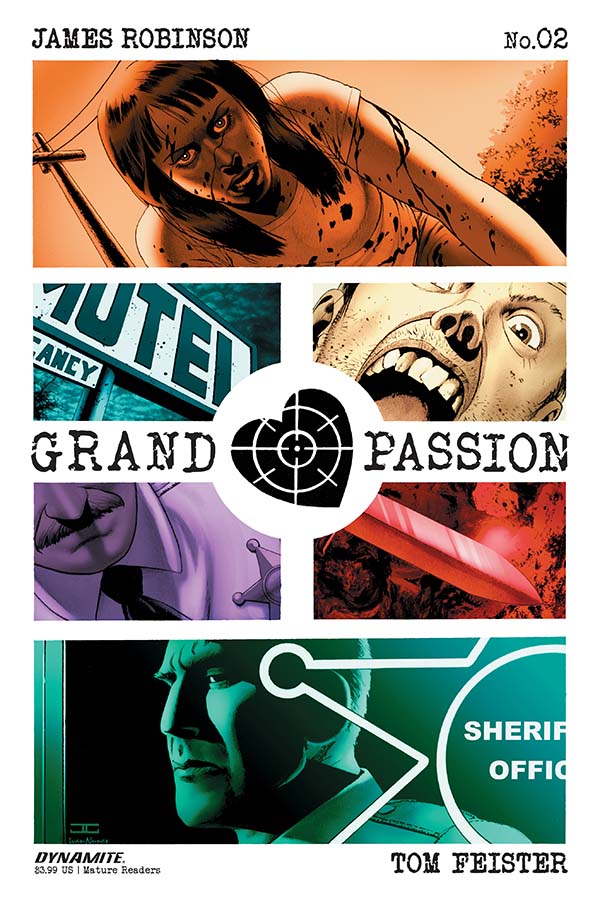 The challenge is before us:  how to write about GRAND PASSION and alert readers to the amazing book that it is without giving the plot away?  We certainly don’t want to spoil it for those readers who pick up this book based on our recommendation.

It’s a gritty crime comic that begins with Steve and Mabel,  a pair of  modern day Bonnie and Clyde bank robbers that gets broken up when Steve gets killed. Mabel escapes, but not before making eye contact with new small town Illinois deputy Mac. Both Mabel and Mac feel the electricity and magic.  But Mabel vows to return later to avenge Steve by killing Mac. As promised, GRAND PASSION will blend crime and romance together. But not just yet.

We get more details in Issues #2 and #3, details we aren’t going to share too much of.  Deputy Steve is the only one investigating the bank robbery and hoping to find clues that will lead to the whereabouts of Mabel, who should be long gone if she’s smart. But, there’s that vow she made.  Don’t read this book if you don’t like realistic portrayals of violence. And for sure don’t read Issue #3 if you don’t believe smoldering sex scenes have any business on the comics pages.

We are reminded of some classic crime movies, such as the adaptation of James M. Cain’s The Postman Always Rings Twice. GRAND PASSION is a very cinematic book, in both story and illustration.  The dialogue is convincing.  The situations get complicated. The art team rocks. We’re loving this book. 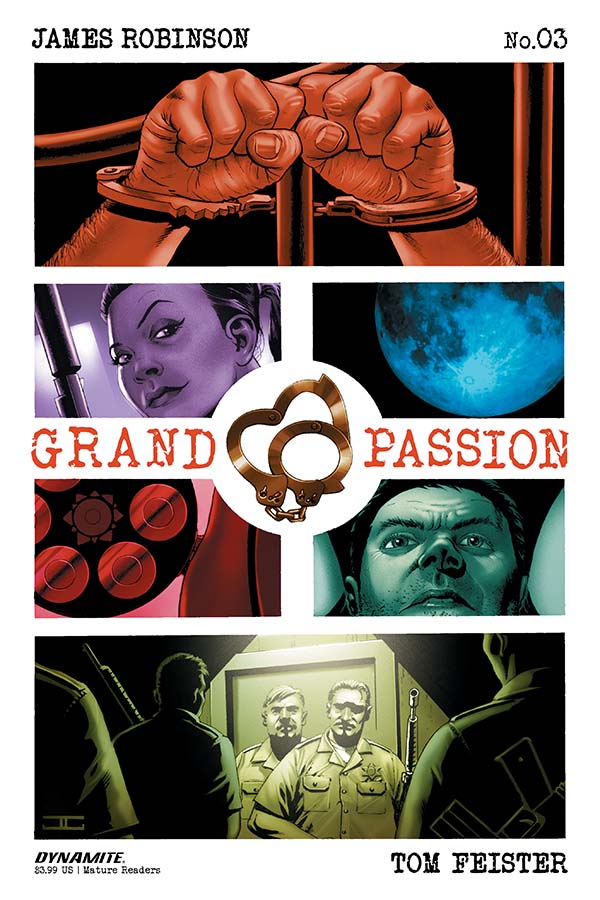 STORY:  While the story and plot may not seem totally original to anyone familiar with crime fiction, it’s all about the story-telling style of Robinson.  He knows how to bring it, keeping it fresh and engaging. This book really flows. Good drama, suspense, details. 2.5 POINTS.

ART:  It bears repeating: Feister has a nice, crisp cinematic style that goes right along with Robinson’s story approach. The use of very narrow multiple panels are especially effective. Many are dialogue and caption-free, allowing the art to move the story along.  2.5  POINTS

COVER:  Gives a clear indication of the contents and the story-telling style. A montage of images to pull you in. 1.5 POINTS.

RECOMMEND?  Yes. If you like crime comics and you want something a little different, check this out. 1 POINT.

TOTAL RATING: 8.5 POINTS. This book will make you want to go find some more crime comics to read, which is not a bad thing at all.  You also may want to take a cold shower later.