What got my attention immediately was the pairing up of a classic fairy tale with musical motifs.  That’s a combination that pushes two of my “hot buttons” - -  so I made it a must-read.  I was not disappointed.  This is a very entertaining and cleverly designed work that rivals Bill Willingham’s  creativity on the long-running FABLES series from Vertigo.

As if taking the classic tale of the Big Bad Wolf and the Three Little Pigs and turning it upside down wasn’t enough to interest, BB WOLF AND THE THREE LPS  serves as an allegory for the oppression of  the black population in the deep South (Mississippi) in the 1920’s.  While they may be free (wolves),  the governing bodies (pigs) have the power to deny them their land, homes and possessions and even own the businesses and clubs they patronize as well as the shops they depend on. - - keeping their thumbs pressed down on these poverty-level citizens at all times.

The story is narrated by Barnabus Benjamin Wolf, who owns a modest farm and works it by day and plays the blues at night in order to provide for his wife and family of little cubs.  After a late night of “boozin’ and bluesin’”  and hung-over he wakes up late morning to the sound of the (porcine) police pounding on his door, accompanied by three little businessmen (the 3 lps) who have discovered a “little loophole” in the legal papers to the property and now claim it as theirs.  An outraged BB Wolf frightens them off, but this only sets off a later chain of events that sees him losing both his property and family (trapped in the home and burned to death), and then departing even deeper into booze and blues and thoughts of murder/ revenge.

Make no mistake. BB WOLF AND THE THREE LPS is  based on a children’s favorite story;  but it’s clearly a children’s book meant for adults.   What happens and what BB Wolf does to obtain his revenge (decapitation, gutting his victims, etc.) is both grisly and bloody.  The art by Richard Koslowski is very stylish and appropriate for the contents.  The pages featuring multiple panels brought back memories of reading WALT DISNEY”S COMICS AND STORIES from Dell Comics back in my youth, but this a very dark version of same. 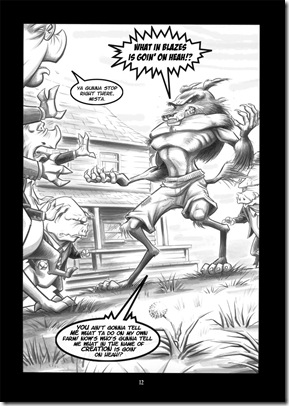 The book is divided into three sections - - each corresponding to the famous homes/structures of the 3 Little Pigs  = one of straw, one of wood, and one of bricks.  If you recall your fairy tales you know that the Big Bad Wolf was thwarted when he finally got to the house of bricks.  (Sorry, I don’t want to  tell you whether this ending stays true to the classic ending or not).   Each section begins with a small drawing of each home, accompanied by an appropriate musical quote. (At least I recognize 2 out of 3 references).  1) The straw home = “Don’t leave home, there’s nothing but starving wolves outside.” – In memory, Our House Of Straw.  2) The wood home = “Oh baby, the river’s red.  Oh baby, in my head” – Led Zeppelin,  Four Sticks. 3) The brick home = “Sure enough to knock a man to his knees.” – The Commodores, Brick House.

There are additional musical references scattered through-out, just waiting for aficionados (especially of the blues) to uncover them.  Just as blues originated in the Mississippi delta, received further attention in St. Louis and developed into a more popular form once it found its way into the Chicago blues clubs - - the mission of BB Wolf to take down the pigs leads him in the same exact direction/progression.   The last scenes (page 82) where BB Wolf makes his final statement is a howl.

The afterword by JD Arnold is like sugar icing on the blues cake, giving some back story of BB Wolf and even his song lyrics (perfectly written like authentic Delta blues) .  The reference to other classic musicians he influenced is very natural, mixing a blend of made-up names with actual classic blues artists = “Big Dog Williams, Garfield Barkers, Willie Browncoat, Snoopy Pryor, Hound Dog Taylor, and Howlin’ Wolf.”  AWWW-WOOO!

BB WOLF AND THE THREE LPS is a “keeper”.  It’s  a quick and enjoyable read I know I’ll return to again (perhaps frequently).