Showing posts from September, 2016
Show all

By pghhead - September 29, 2016
EDITOR’S NOTE :  To many readers, it may appear that BC Refugees has morphed into a news and information site. We are honored that so many publishers are keeping us in the loop so we can inform our readers of upcoming projects.  However, we still intend to concentrate on our core mission:  to bring to attention creators and works that are perhaps not receiving as much publicity as they deserve.  Our recent Previews Pre-Order picks is a step in that direction.  (Yes, we still intend to spotlight work from the major publishers as well - - as long as it merits the attention.)  We’ve been trying to return to posting more reviews of comics on the site, and have been delayed several times.  It’s a cliche, but the shortest explanation is to just say that  “life gets in the way.”  Nevertheless, we will keep trying.  The new ratings system is just a method to make it easier to post reviews, by following a template.  It should also make it easier for readers to decide if they want to pick up the
Post a Comment
Read more

A preview of IDW's specials at New York Comic Con

Diamond gets Doctor Who Distribution Deal

from the official Diamond press release . . . . . .       Adult Doctor Who titles join the young adult and children's line of books and novels represented by Diamond Book Distributors   (BALTIMORE, MD) — (September 20, 2016) — Penguin Random House UK has expanded its distribution deal with Diamond Comic Distributors (DCD) to sell and promote its entire line of Doctor Who books and novels to comic book specialty stores, bookstores, mass-market merchandisers, libraries and other outlets in the United States.   Previously, Diamond represented only Penguin Random House’s young adult and children's line of Doctor Who books and novels, but the deal has now been expanded to includ e its adult line of Doctor Who titles.   Robert Waddington, International Sales Director, Penguin Random House UK comments: “Diamond Comic Distributors have proven themselves a strong partner on our young adult Doctor Who range, and we are delighted to now be selling our adult list through them as
Post a Comment
Read more

Valiant Entertainment and Keep A Breast Join Forces to Fight Breast Cancer with New Ongoing Partnership Valiant’s Breakout Heroine Faith to Debut as Leading Non-Profit’s Official Comics Ambassador at New York Comic Con 2016     Valiant Entertainment  – the award-winning publisher of the largest independent superhero library in comics – and  The Keep A Breast Foundation  – the leading global youth-based breast cancer prevention organization – are proud to announce a new ongoing partnership dedicated to furthering the California-based non-profit’s ongoing mission with new initiatives in educational publishing, fundraising merchandise, convention and exhibitions outreach around the world, and much more. As detailed today at  Fast Company , the new face of this first-of-its-kind collaborative partnership will be Valiant’s own leading super-heroine, Faith, who will make her debut as Keep A Breast’s official “comics ambassador” at  New York Comic Con 2016 . Faith will then subsequently be u
Post a Comment
Read more 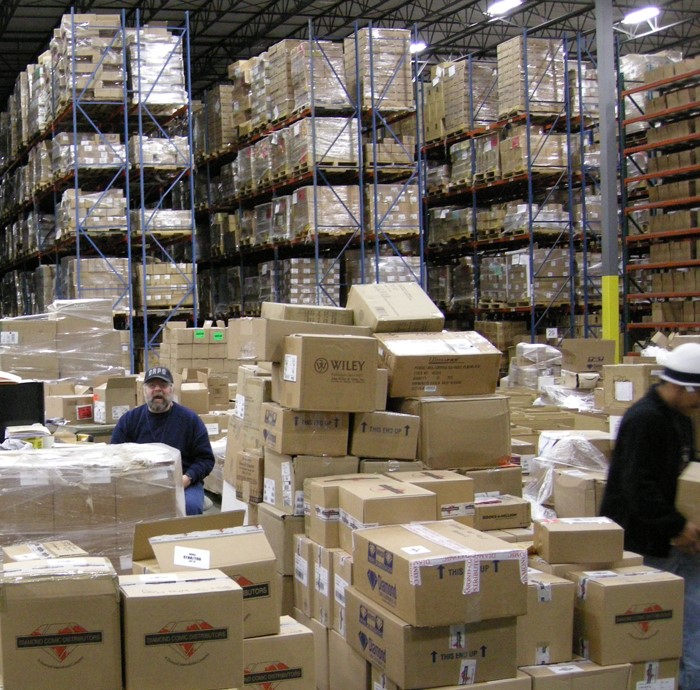 EDITOR’S NOTE:  The following article will share information with readers regarding how Diamond, the primary global distribution source for comics and graphic novels, is investing in the future of the comic book specialty market.  Rather than edit the size of this article, we present it in full.  Readers interested in learning more about the expansion of Diamond’s Olive Branch Distribution Center, can get the details here.  We at BC Refugees have always been interested in the business side of comics, and the role that Diamond plays in that effort.  While we recognize that having a single source for printed material can sometimes cause issues for local comics stores, it is encouraging to see a supplier divert some resources to invest in the future.  It helps that Steve Geppi, president of Diamond, is a life long comics fan and supporter of the industry.  His letter to retailers prefaces the article. Thanks to Megan Cosman, Public Relations Associate at Diamond, for providing this infor
Post a Comment
Read more

from the official IDW Publishing press release . . . . COMICS INDUSTRY UNITES WITH  LOVE IS LOVE  BENEFIT BOOK  IN SUPPORT OF ORLANDO TRAGEDY   San Diego, CA (September 21, 2016) – IDW Publishing, with the support of DC Entertainment, will honor the victims of Orlando’s Pulse Nightclub tragedy by publishing LOVE IS LOVE, an anthology graphic novel curated by writer  Marc Andreyko  (BATWOMAN, WONDER WOMAN ’77). In the wake of this devastating event, Andreyko assembled a group of fellow comic book creators to contribute to the benefit project. Andreyko received an overwhelming response across the comic book community and beyond, with over 200 writers and artists lending their talents to LOVE IS LOVE, a collection of over 100 short graphic stories. All material has been donated by the writers, artists, and editors, with all proceeds going to victims, survivors, and their families via EQUALITY FLORIDA.    LOVE IS LOVE will debut in comic book shops and bookstores this December. The ant
Post a Comment
Read more

from the official Valiant Entertainment press release . . . . .     They’re inside your towns. Inside your schools. And inside your head… Valiant is proud to present an advance preview of  HARBINGER RENEGADES #1  – the  FIRST ISSUE to the  ALL-NEW ONGOING  series exploding out of the “ FUTURE OF VALIANT ” initiative! On  November 16th , multiple Harvey Award nominee  Rafer   Roberts  (A&A: THE ADVENTURES OF ARCHER & ARMSTRONG) and comics superstar  Darick Robertson  ( The Boys, Wolverine ) document a powerful and subversive new beginning for the most fearless superhero series of the shelves! Kris Hathaway, Peter Stanchek, Faith Herbert, and John Torkelson thought they could go underground. They thought they could get their old lives back. They were wrong. And when a violent, new superpower movement begins to spread across the suburbs, America’s only hope will be the teenagers it wished it could forget... “I’ve been describing the series as ' Jack Kir
Post a Comment
Read more

from the official Valiant Entertainment press release . . . . .     Nature conquers all! Valiant is proud to present an advance preview of  SAVAGE #1 (of 4)  – the  FIRST ISSUE  of the bone-breaking new series striking out of “ THE FUTURE OF VALIANT ” initiative on  November 30th ! This fall, acclaimed writer  B. Clay Moore  ( Aloha, Hawaiian Dick ), and explosive artists  Clayton Henry  (ARCHER & ARMSTRONG) and  Lewis LaRosa  (BLOODSHOT REBORN) hone their killer instincts for the must-read debut of Valiant’s next major hero! Marooned in an unforgiving prehistoric landscape, high society’s most privileged celebrity family is fighting tooth and claw – literally – for survival. Once they lose everything – and each other – what part of them will endure? Where will the man inside each of them end…and the animal begin? Fifteen years ago, the world’s most famous soccer star, his former supermodel wife, and their young son disappeared without a trace. The world believes they are dead… Bu
Post a Comment
Read more
More posts