Showing posts from June, 2010
Show all

Costume Change Cartoon of the Week

Artist Chris Samnee's sketch about today's  Wonder Woman changes  is a hoot: So Aquaman found this on the bottom of the ocean There's a second panel at that link that makes the joke, and Samnee's blog is well worth following for lots of great sketches like  these . Edited to add: Samnee and others (including Francesco Francavilla and  Mitch Breitweiser ) also post sketches weekly at  Comic Twart .
Post a Comment
Read more

I don't know when you'll get to read this, since at this writing I don't have power at home or Internet at work, but below are my thoughts on some recent DC Universe books. (I already covered the Superman books recently, and I'll get to "Batman" after Marvel's "Siege" books.) All these books take place after "Blackest Night" but my commentary is as spoiler-free as I can make it, except that I will be discussing the endings of "Rise of Arsenal" and "Titans: Villains for Hire". Adventure Comics 12 : Apparently the plan is to do "Superboy & the Legion" stories set in the past in this book, while the Legion picks up from "New Krypton" in their own book. So far, so good, as Paul Levitz starts with a tale that works on two levels: both as a thematic complement to Geoff Johns' issues (Clark makes a list) and as a little easter egg for longtime Legion fans (explaining why the Legion started eras
Post a Comment
Read more

Fair warning: I’m going to discuss the end of the story here, even though DC probably won’t release all the trades for a while. It seems pointless to me to write about these last issues circumspectly, and probably more people are going to at least sample the Straczynski run – exposing them to the new status quo – than read most of the “New Krypton” issues in the first place. So stop here if you don’t want to be spoiled. Otherwise, my ramblings continue after the jump.
5 comments
Read more 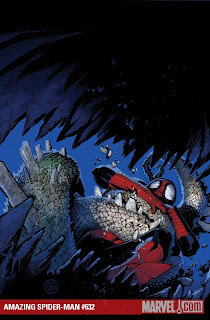 Amazing Spider-Man 626: A nice little done-in-one by Fred Van Lente where he puts a slight spin on the "Gauntlet" stories by using the new female Scorpion from a couple of years back, who's not evil. (She's a former S.H.I.E.L.D. agent.) There are also some good scenes between Peter and his roommate and art by the always excellent Michael Gaydos. Amazing Spider-Man 627-629 "Something Can Stop the Juggernaut": Veteran Spidey writer Roger Stern returns with a sequel to his famous '80s Juggernaut story, and it's indistinguishable in style from the rest of the recent issues of this title. I mean that as a huge compliment: Stern adapts completely to the modern Marvel writing style, and you wouldn't know that this came from the book's regular writer of 30 years ago. I'm not generally fond of cosmic elements in Spidey stories (not counting "New Avengers"), but Stern makes it work here. Amazing Spider-Man 630-633 "Shed":
1 comment
Read more

I actually am pretty much caught up on my reading – now I just have to find the time to write about all those books! In the meantime, please enjoy Stan Lee’s conversation with Craig Ferguson from last night’s “Late Late Show”. (Which is a really smart and funny show, by the way.)
Post a Comment
Read more

EARP: SAINTS FOR SINNERS #0 (Radical Comics) Written by M. Zachary Sherman and Matt Cirulnick Art by Mack Chater and Martin Montiel If I want to read super-hero fare I can get ample amounts of that from the big two publishers and others. Finding a good and steady reliable source for alternate genres (including horror, dark fantasy, science-fiction, crime, mystery, western, etc.) in comics hasn't been as easy, but it's getting better. It seems there are more and more choices every day. Include Radical Comics in that list of alternatives. From their beginnings in science-fiction and mythological fantasy mini-series they have added more categories and their 2010 menu has a lot of variety. Last week's comic shop offerings included an inexpensive $1.00 preview of the upcoming (Fall 2010) EARP: SAINTS FOR SINNERS mini-series and it looks vey promising. It's a re-boot of the Wyatt Earp legend that aims to accomodate several genres: sc
Post a Comment
Read more

By Jeff Metzner - June 02, 2010
Starting today (though it may take a little longer than that to propagate out to everyone's ISPs), you can reach this site using any of the addresses below: bcrefugees.com bcrefugees.net bcrefugees.org bcrefugees.info And of course bcrefugees.blogspot.com will still work.
Post a Comment
Read more
More posts