Showing posts from July, 2011
Show all

Getting ready to attend the Con?

This information provided via official press release . . . . . Awesome Artists Added to the Baltimore Comic-Con! BALTIMORE, MARYLAND - July 29, 2011 - The Baltimore Comic-Con is happy to announce the addition of Josh Middleton, Adam Hughes, Tony Harris, and Francesco Francavilla﻿﻿ to the line-up of creators appearing at this year's show. The show will be taking place the weekend of August 20-21, 2011 at the Baltimore Convention Center. Josh Middleton broke into the comics industry in 2000 with his work on one of CrossGen's original fours series, Meridian , where he penciled the first six-issue story arc. In 2003, after contributing to Marvel's X-Men Unlimited series, Middleton signed an exclusive with the publisher and helped create the series NYX along with Joe Quesada. Moving on to DC Comics, he served as artist for the mini-series Superman/Shazam: First Thunder, and provided cover art for Vertigo's American Virgin and DC's Supergirl . Middleton's most
Post a Comment
Read more

from the official Baltimore Comic-Con press release . . . . . PLB Comics to offer convention exclusive cover of Gideon and Sebastian: Predators & Prey #1 at Baltimore Comic-Con BALTIMORE, MARYLAND - July 29, 2011 - PLB Comics will be offering a convention only exclusive cover of their newest offering,  at this year's Baltimore Comic-Con. The first in a series of anthology books featuring PLB's vampire hunting duo, Gideon and Sebastian features the talents of some of today's up and coming indie creators such as:  Nathan Thomas Milliner, Mat Shockley, Nikkol Jelenic, Josh Shockley, and James Dufendach. Vampires don't sparkle! And you won't find an ounce of pixie dust or teenage romance in this hard hitting, wise cracking, vampire slaying bonanza! Follow the adventures of Gideon, The Vatican's greatest vampire slayer and Sebastian, a vampire who has traded his allegiance to the Vatican in return for a serum that sates his need for ﻿﻿blood. See as this du
Post a Comment
Read more

PREVIEWS: What’s new for Wednesday, July 27 and beyond

This is one of those weeks where I just didn’t get any advance looks / sneak peeks at any of the new comics coming out on Wednesday, July 27th - - - except for one book = THE VAULT (Image) .  I wrote a long review (which it merits) of THE VAULT back on June 18, which you can locate to your immediate right in the BC REFUGEES ARCHIVES for June.  Here’s a quick reprint of my opening paragraphs:   THE VAULT would read like a straight-up adventure tale of undersea exploration were it not for the two-page prelude that hints at much more dangers to come, and on an epic scale.  I am more than content with learning the details of the exploratory mission in Issue #1 and getting the background on the characters and settings.  The writing is engaging and the beginning of this quest has its share of suspenseful moments, especially when the reader knows that unknown danger and threats lie ahead (thanks to the prelude).  I can’t wait for this series to explode once the dark and supernatural
Post a Comment
Read more 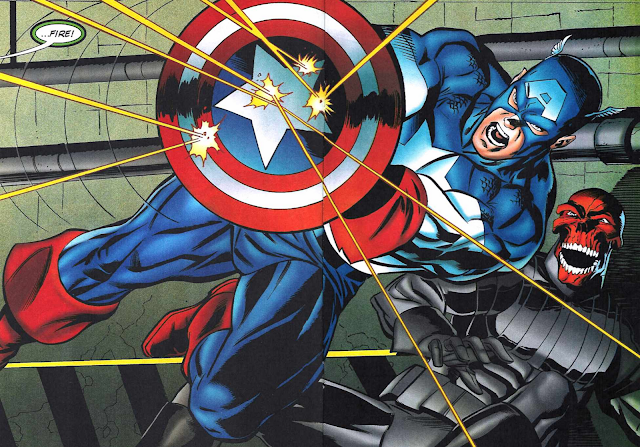 A nice consequence of the Captain America movie book push is that the bulk of the Mark Waid and Ron Garney (later Andy Kubert) run on the character is now collected. (There's one more volume coming in October, featuring Waid's intended version of Cap #14 for the first time .) Waid's is some of my favorite work on the character but I haven't read most of it since it was first released, so I was excited to experience it again. Captain America: Operation Rebirth: It's hard to articulate now how much of a departure these issues were from what had gone before. I'll get to the Mark Gruenwald years, which were wonderful in their own way, in another post, but suffice it to say that Cap had spent the last year in increasingly bulky suits of armor trying to stave off his own death from super soldier serum poisoning. The book was a complete blank slate, with the main character presumed dead and his supporting cast (mostly Avengers and employees) gone. Waid, as far a
Post a Comment
Read more 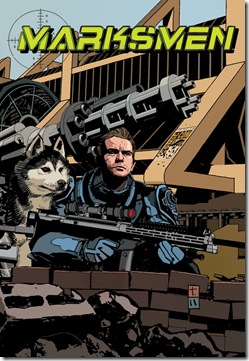 MARKSMEN #1  (Benaroya Publishing / Image Comics, July 2011  $1.00 introductory issue)  Story: David Baxter.  Art:  Javier Aranta, Garry Leach & Jessica Kholinne (of Imaginary Friends Studio).  Cover: Tomm Coker. The short notes are that MARKSMEN is a post-apocalyptic science fiction adventure .  That brief description may be enough to attract those readers who apparently can’t get enough of this type of story.  Those four words alone have spawned a sub-category of futuristic tales in the science fiction genre.  Those four words alone may cause others among us who have sampled more than their fair share of post-apocalyptic science fiction adventures  to groan and utter “oh no, not again” under our breath before dismissing and avoiding MARKSMEN.  I sincerely hope that doesn’t happen.  I empathize more with  the latter reader type mentioned above, yet I read MARKSMEN  in spite of that.  After all, that’s what I’m here for.  I’m glad I did because this book has a lot going fo
Post a Comment
Read more

FLASHPOINT explorations and samplings – part one 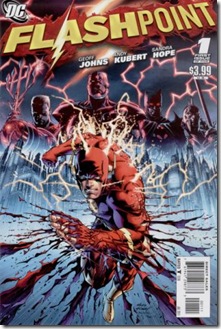 WARNING:  THERE WILL BE SPOILERS IN HERE.  I’m not sure how many people will make the effort to get every single one of these Flashpoint-related titles - - - there’s just  too many.  I’m excited about DC putting out 52 #1 issues (likewise, 52 new starting points) in a single month, but also discouraged by the required commitment of time and money.  I’m getting the core Flashpoint limited series and some select titles and will summarize them here.  In doing so, I’m bound to give away some plot details but that may be essential to helping you make a purchasing decision.  If I save you time, money or help decide whether or not to pick up something new . . . then I’ve done what I hoped to do. And, if you’re not going to read any of these books you’ll at least know something about what happens. THE SHORT AND SWEET COMMENTARY:  I was surprised as well as shocked by some of the changes and major events that occur during this super-saga.  There is some tampering with some core characters that
Post a Comment
Read more 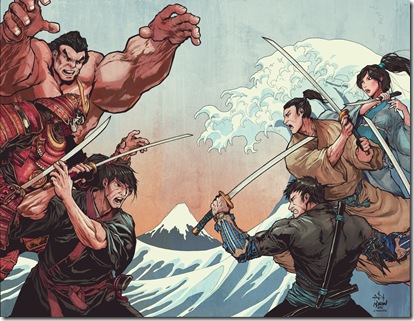 SAMURAI’S BLOOD  #2 of 6  (Benaroya Publishing / Image Comics)  Story:  Owen Wiseman.  Art:  Nam Kim, Matthew Dalton.  Colors:  Sakti Yuwono.  Cover:  Jo Chen.  Release date July 13, 2011. SAMURAI’S BLOOD escorts the reader through a tale of flight and revenge in feudal Japan and adds enough details of early Japanese culture, social mores, philosophy and the honorable traditions of the samurai to fill a notebook.  Much of this detail is described in the captions which helps flavor the main story rather than interrupt it . It’s a nice effect, and best appreciated by going through this issue once without reading the captions, and then include them on the second reading.  I’m on my third go-around and I’m still picking up more detail and finding new things to renew my appreciation. As issue #1 ended, the three young Samurai-in-training obey their elders and flee the massacre of their clan in order to return and exact revenge at some future date.   Issue #2 begins one week later as the
Post a Comment
Read more 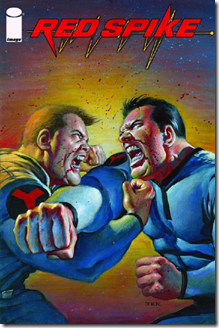 RED SPIKE #3 of 5  (Image Comics, release date 7/06/11)  Story: Jeff Cahn.  Art: Mark Texiera, Salvador Navarro & Ifansyah Noor.  Cover: Mark Texiera. The close-up battle on the cover of Issue #3 might give the impression it will be an all-action issue featuring a knock-down, drag-out fight between two equally matched and fierce warriors.  Actually, there’s a lot more of substance and back story in this issue that neatly fills in some of the details behind Project Red Spike but still leaves a lot left to be uncovered.  However, that evocative cover really pulls you in with a brilliant depiction of both fighters connecting with face punches, the  blood flying as they confront each other with angry eyes and open-mouthed outrage.  You would expect no less when two macho mens’  berserker rage is surgically adrenaline-augmented and their combat training kicks in. Red Spike operative Greg Dane has fled the home base after some corrective surgery fails to control his ever-growing psyc
3 comments
Read more

We're nearing another Marvel movie, so the Mighty Marvel promotions department is once again filling shelves with appropriate books. (There aren't a lot of new X-Men books, though, presumably because that's a Fox movie that only profits Marvel indirectly.) Here are my brief impressions of some recent Captain America releases. More to come later, but I'm behind in writing about the rest of the books I've got on hand and it seemed like an appropriate weekend to have Cap on the blog. Captain America Omnibus: Collecting the earliest Silver Age cap solo stories by Stan Lee, Jack Kirby and Jim Steranko from Tales of Suspense #59-99 and Captain America #100-113. As with the Thor volume I didn't reread these stories now for time reasons and because I've read them multiple times, but if you don't own copies of or haven't read this material I highly recommend it. Even at full list price ($99), which you probably won't have to pay, this is a pretty good d
1 comment
Read more
More posts