Showing posts from February, 2014
Show all

By Unknown - February 28, 2014
LOST BOYS  (1992) by Orson Scott Card          This is an early work by the same author of the popular ENDER'S GAME science fiction series, and more recently famous for his anti-homosexuality statements. However, that has nothing to do with this book and really nothing to do with any of his writings. I'm not endorsing his personal values and beliefs. I'm just hoping to draw attention to a skilled writer who really develops characters and does so with compassion and understanding  (in direct contradiction to his rigid opinions on sexual preference).  This is the first horror novel written by Card, and has nothing to do with the 1980's teen vampire movie of the same name.                 There is an element of dark sub-surface horror that runs throughout this book; but the action related to it only takes up about one-third of the book at best.  However, the surface story - that of a family trying to make a new life and cope with the challenges and strugg
Post a Comment
Read more

The Last Iron Fist Story…Until The Next One! 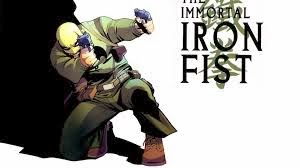 TPB:  The Immortal Iron Fist: The Last Iron Fist Story Writer: Ed Brubaker/Matt Fraction Artist: David Aja Price:  $14.99 If you only think of Brubaker as that guy who writes Captain America than you don’t know Brubaker.  From Fatale to Criminal , Brubaker has proven himself an excellent writer of the noir genre.  He’s done amazing independent work on The Authority and has written mainstream marvel titles like Secret Avengers and X-men .  Matt Fraction is best known for his work on Iron Man and several major crossover events in the Marvel Universe such as Fear Itself and AvX .  David Aja is lesser known artist but has illustrated Daredevil and several Wolverine One-shots.  The Immortal Iron Fist ran for 27 issues starting in 2006 making it the longest solo run in the 30-odd year history of the character.  The book retells the character’s origins while revealing more about the previous avatars of the Iron Fist.  Danny Rand is the Immortal Iron Fist but is he the
1 comment
Read more

By pghhead - February 25, 2014
(Editor's Note: Back in January 2014, I listed the Ghastly Award nominees and named my personal picks to win. It's time to announce the actual winners and to compare with my picks to see how well I did with my predictions. Results = 8 out of 13 total.) The Ghastly Award Judges chose the nominees from the books submitted by Comics Creators and Publishers throughout 2013. Winners were chosen by the Judges, Comic Book Creators and the Fans. The Ghastly Judicial Panel congratulates all 2013 Winners and Nominees. It is an honor to be recognized by fellow professionals for such outstanding work in horror comics. THE 2013 WINNERS ARE: BEST ONGOING TITLE: Afterlife with Archie (Archie Comics) - - - my pick also BEST MINI-SERIES: Locke & Key: Omega (IDW Publishing) - - - my pick also BEST ONE-SHOT: Edgar Allan Poe: The Raven & The Red Death (Dark Horse) BEST NEW SERIES (Fan Voting Decided the Winner): Afterlife with Archie (Archie Comics)- - -
Post a Comment
Read more 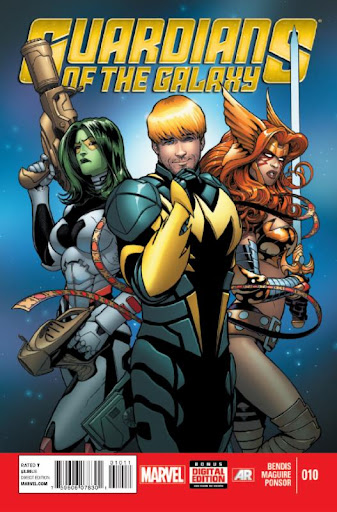 from the official press release . . . . . . BALTIMORE, MARYLAND - February 17, 2014 - The new and expanded floor for the premiere 3-day show continues to fill in.  The 2014 Baltimore Comic-Con will be held the weekend of September 5-7 at the Baltimore Convention Center. The Baltimore Comic-Con is elated to welcome back the amazingly talented Kevin Maguire, Herb Trimpe, and Mark Waid. Kevin Maguire acquired notoriety working on a number of DC titles including Justice League, Formerly Known As Justice League, JLA Classified, and Doom Patrol, as well as Marvel's Defenders.  He is one of the artists credited with the re-launch of DC's Teen Titans and alternated art duties on the re-launched World's Finest .   Maguire has recently been seen on Marvel's Guardians of the Galaxy .   Artist/writer Herb Trimpe has the privilege of having been the first to bring the X-Men's Wolverine to life in the pages of The Incredible Hulk #181. Trimpe cut his teeth with Marvel begin
Post a Comment
Read more 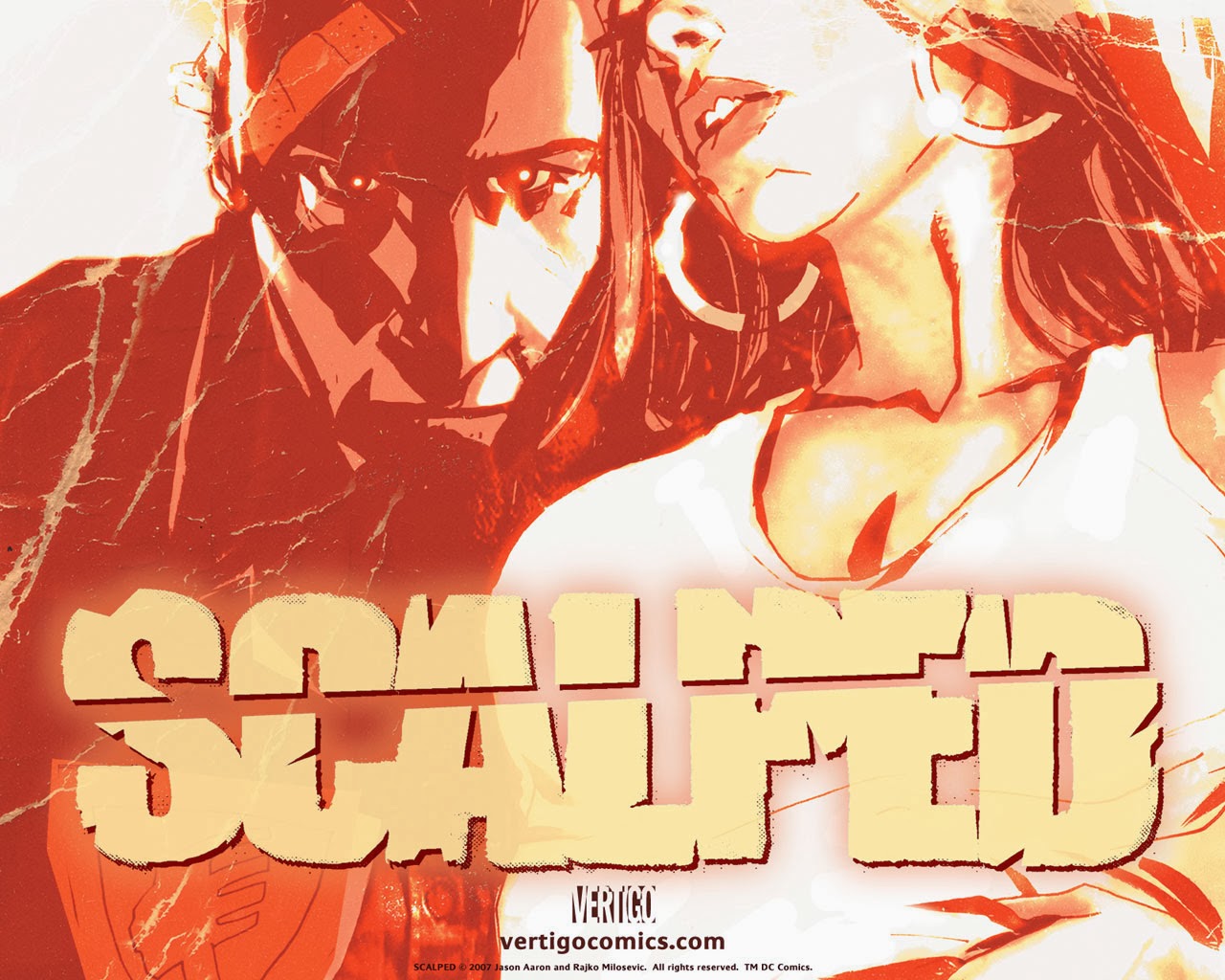 SCALPED Volume 1 Writer: Jason Aaron Artist: R.M. Guera Vertigo | graphic novel | $14.99 Scalped  was a 60 issue series created by  Jason Aaron  and published by  Vertigo . It follows the story of  Bad Horse  who left the reservation fifteen years ago as a child. While passing back through the reservation to supposedly wait out some heat brought down on him by the white man, he gets pressed into service as a reservation peace officer ahead of the opening of the reservation’s first casino. You may know Aaron as the longtime writer of  Wolverine and the X-Men  or as the writer of the second series of  Punisher MAX .  R.M. Guera  is a  Serbian  comic book writer and artist who lives in  Spain  but has few credits to his name. You don’t have to be a bleeding heart to feel bad about how the  Native Americans  live. In the heart of America, Bad Horse’s reservation suffers from rampant alcoholism, poverty, crime, and meth-heads looking to cook up a batch in one of the many abandon
Post a Comment
Read more

GREG PAK: Busy loving what he does in comics 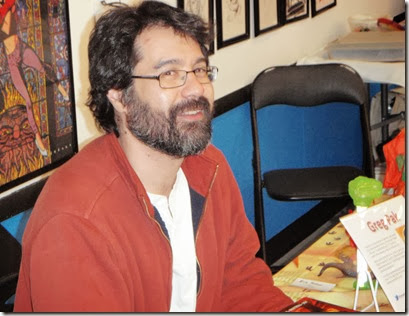 THURSDAY, FEBRUARY 06, 2014  - - WILMINGTON, DELAWARE . . . The Comic Book Shop on Marsh Road held an event to help usher in the debut issue of TUROK, DINOSAUR HUNTER   from Dynamite Entertainment at their store, with a gracious Greg Pak signing his work and chatting with fans.           I had a feeling the event would be busy, maybe too busy to hope for an extended interview with Pak - - and I wasn’t wrong about that.  There was a steady stream of fans from 5 to 8 p.m. entering and exiting The Comic Book Shop.  At one time the line to meet Greg extended across the full width of the store  (it’s rather spacious, and growing soon).    I settled for the chance to get a few autographs on Pak items from my collection  ( Turok, Dinosaur Hunter; Doctor Strange: Year One; and The Eternal Warrior) and ask a few questions.  I got back in line a few more times to ask some additional questions.  I also learned quite a bit from just hanging out near the autograph table and listening to
Post a Comment
Read more 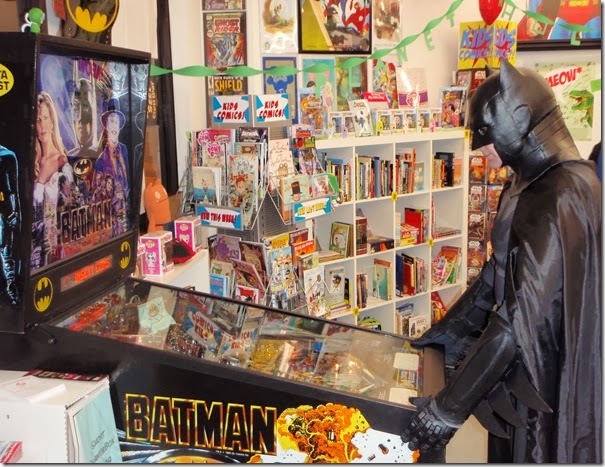 Even the Dark Knight deserves a night out!  Thanks to Kevin Diplacido for his good nature!
1 comment
Read more 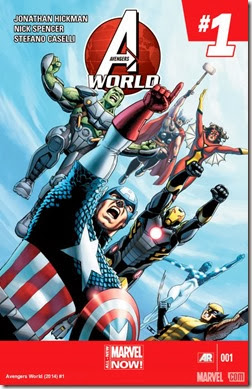 AVENGERS WORLD #1 (Marvel, March 2014) Jonathan Hickman & Nick Spencer, writers. Stefano Caselli, artist. Color artist, Frank Martin.           I stepped away from trying to follow THE AVENGERS after the events of Secret Invasion when the number of Avengers titles and over-lapping mega-storylines just became too much to try to stay up with. The same thing happened to THE UNCANNY X-MEN many years prior. I just had to give up. And, truth be told, super-hero stories just weren’t giving me that same bang for the buck that I once enjoyed. However, I never lost my interest in many of these iconic characters so I kept looking in from time to time. So here comes Marvel with yet another re-boot. So, I decide to pick a new Avengers book and jump in again. ( so soon after Marvel Now! - - does that make this Marvel That Was Then, This Is Now! ??) Considering the team-up of Hickman and Spencer, two writers I admire and respect, it seemed like my best bet. The verdict is not in yet. Thi
Post a Comment
Read more

TUROK: DINOSAUR HUNTER #1 (Dynamite Entertainment, February 2014) Greg Pak, writer. Mirko Colak, artist. Lauren Affe, colorist. Marshall Dillon, letterer. Bart Sears, main cover. A character as old as several other comics icons gets another chance at emerging into the 21st century when Dynamite Entertainment debuts the first of their Gold Key re-imaginings with TUROK, SON OF STONE. While its’ not entirely clear what direction this new series will take with this classic character, Issue #1 has potential and serves as a good introduction to a world that will feature Native Americans fighting for their lives against ferocious dinosaurs. In the original version, Turok and his younger brother Andar entered some caverns and wandered off. They lost their way, and emerged into an isolated valley populated by dinosaurs. Their adventures began with Dell Comics in 1954 in the pages of FOUR COLOR COMICS and later earned their own title (TUROK, SON OF STONE) under
1 comment
Read more 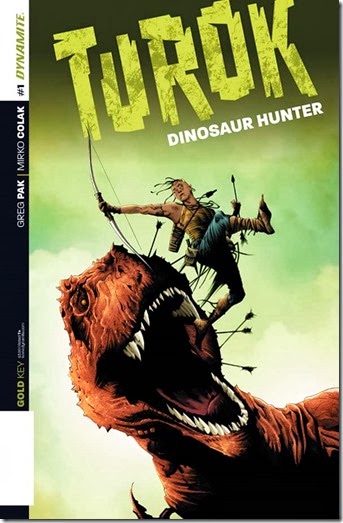 THE COMIC BOOK SHOP in Wilmington, Delaware celebrates the release of TUROK, DINOAUR HUNTER #1  from Dynamite Entertainment with a launch party on Thursday, February 6th with writer Greg Pak and musical guest Adam WarRock .   The excitement begins at 5 p.m. at the store location at 1855 Marsh Road.                Mostly known for his work on Marvel’s PLANET HULK and currently writing BATMAN/SUPERMAN for DC and ETERNAL WARRIOR for Valiant , Greg Pak is a multi-talented creator with film-making and acting/improvisational skills in addition to his credentials in comic book scripting.  His latest work is TUROK: DINOSAUR HUNTER for Dynamite Entertainment .  Pak will be signing his books and chatting with fans during his visit to The Comic Book Shop.            A native of Texas, Pak currently resides in New York which serves as the hub for his film directing and comic scripting endeavors.  He is a graduate of Yale University, where he wrote for the campus humor
Post a Comment
Read more
More posts