Showing posts from November, 2012
Show all

Bleeding Cool: Reading About What We Like To Read 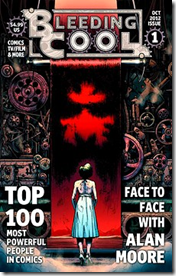 BLEEDING COOL MAGAZINE #1 (Avatar Press, November 2012) The first issue is finally here and it delivers on everything that was promised in the Issue #0 trial run that came out earlier this summer. Offering 114 pages of quality content for $4.99 BLEEDING COOL MAGAZINE brings more of the “daily news and opinions about comics, TV, and film” that the www.bleedingcool.com website offers with less time-sensitive material but still some advance previews, plus detailed interviews and in-depth articles/content that would seem too large and unwieldy on the web. And it’s all done in the same respectful-but-not-fawning and serious-but-not-clinical approach that the web site is known and praised for. It’s a nice comic-sized magazine that should fit right in beside the weekly books on the shelves of our favorite comic book stores. Is it a cross between the late WIZARD magazine and the current COMIC BUYER’S GUIDE? I’d agree with that. While COMICS BUYERS GUIDE is now in a magazine format,
Post a Comment
Read more 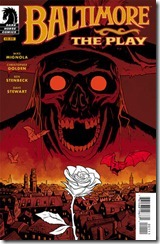 It’s been a long time since I put one of these articles together the day before new comics are released. I wanted to re-visit this for fun and change it up a little. I’m not going to list every book that comes out tomorrow. I won’t even narrow it down to what I feel are the most popular books (or the most ordered). This will be purely subjective - - books that I am personally interested in. Also, without any other limitations = I’ll list all the books that I would pick up tomorrow as if I had no restrictions on time or budget. (So, my actual list is a bit shorter than this one.) BALTIMORE: THE PLAY (Dark Horse) one-shot by Mike Mignola and Christopher Golden “A mad playwright puts on a Grand Guignol featuring actors that are real vampires. The evil financer of the play makes a bizarre discovery when he finds out that the playwright is a fraud and the true author is a disembodied head of a famous American author kept in a glass case.” By Mike Mignola and Christopher Golden. DARK HOR
Post a Comment
Read more 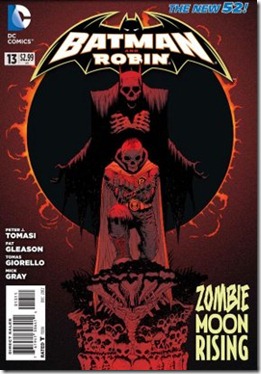 After spending so much time with the recent slew of AVENGERS VERSUS X-MEN books, I decided to keep my distance from the “Death Of The Family” saga currently unfolding in the Batman-related titles. However, the buzz about these Joker-infused books has me curious, especially after learning that the short print runs of BATWOMAN #13 and CATWOMAN #13 both sold out quickly. They are now scheduled for a second printing and copies (which cross-over into the Joker story) have been reported to be selling on E-Bay for $20 per copy. I’m still planning to wait for the trade paperbacks after everything wraps up. But I can’t resist just dipping my toe in the water a little. So, remembering what Pete Tomasi said about Issues #13-14 of BATMAN AND ROBIN being a soft tie-in to the Joker saga rather than a hard cross-over, I decided to pick them up. Glad I did. This is a great little two-part story.                                    BATMAN AND ROBIN #13 (December 2012) Peter J. Tomasi – writer
Post a Comment
Read more 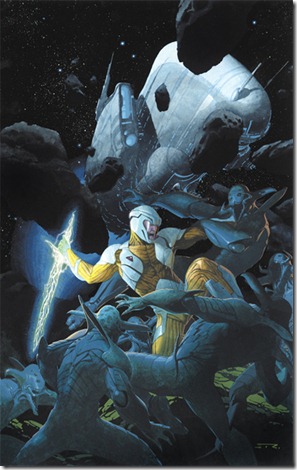 X-O MANOWAR #1 – 4 (May-August 2012) Writer: Robert Venditti. Penciler: Cary Nord. Inker: Stefano Gaudiano. Colorist: Moose Baumann. Letterer: David Lanphear. The late, lamented Valiant Universe has returned in 2012 and appears to be making an impact in the comics world. I was a reader then and I plan to be again. I miss many of their titles. It appears that the new editorial board intends to remain true to the heart of these characters while still putting a modern spin on things. They’ve chosen to re-introduce us beginning with X-O MANOWAR , which I think is a great choice as a flagship title for the new Valiant. Inspired by IRON MAN at Marvel Comics, X-O MANOWAR was originally created by artist Bob Layton (who penciled many Iron Man issues) with writer Jim Shooter, and was much more than just a carbon copy of that character. Recently, the SOLDIER ZERO series from Boom! Studios apparently drew its’ inspiration from the original X-O MANOWAR with a similar origin (alien suit a
Post a Comment
Read more

from the official press release  - - - this looks interesting, so I’m sharing Ugliest Kid Ever Comes To Comic Book Stores Todd: The Ugliest Kid On Earth Launches January 2013 November 15, 2012 – LOS ANGELES:   Eisner-nominated artist M.K. Perker and award-winning writer Ken Kristensen announced today that their comic book  Todd, The Ugliest Kid On Earth   launches January 16, 2013 via Image Comics. Todd, a collision of comedy, sex, and violence, follows the misadventures of America's most dysfunctional family as they go head-to-severed head with an Oprah-loving ax murderer, a cult-crazy soap opera star, and a neo-Nazi prison gang. The full-color four-issue mini series will hit comic stores January 16th in both digital and print formats. An ensemble comedy, Todd follows the misadventures of a dysfunctional small-town family caught in extraordinary circumstances. The heart of the story is son Todd – a good-hearted kid who wears a paper bag on his head because he’s so ugly. Or is
Post a Comment
Read more

VALIANT COMICS: Back From The Shadows 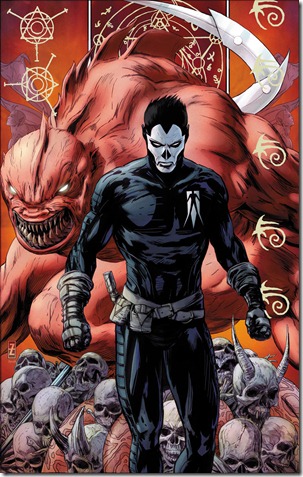 SHADOWMAN #1 (Valiant Comics, November 7, 2102 release date) Written by Justin Jordan & Patrick Zircher. Art by Patrick Zircher. Color Art by Brian Reber. Letters by Rob Steen & Dave Lanphear. Timing may be everything, even when it’s coincidental. Just as one comics publisher announces the ending of a long-running supernatural/horror-themed title (John Constantine , HELLBLAZER ) - - - in steps Valiant Comics with a new reluctant defender against demons in SHADOWMAN (the latest offering in their revival of many popular 1990’s titles from the original Valiant.) At least those of us who favor the dark and disturbing in our illustrated tales will have something to satisfy our cravings. Based on the debut issue, the new SHADOWMAN appears to be a nice mix of the popular original title and the darker, voodoo-themed 1997 re-boot from Acclaim Comics. We first learn of the main protagonist, Jack Boniface, before his birth as his father leaves his pregnant mother behind and depart
Post a Comment
Read more 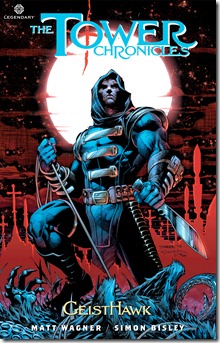 THE TOWER CHRONICLES: GEISTHAWK Volume 1 (Legendary Comics, September 2012 $7.99)  Written by Matt Wagner. Pencils by Simon Bisley. Inks by Rodney Ramos. Color by Ryan Brown. Letters by Sean Konot. Let this serve as a “heads up!” message between friends. THE TOWER CHRONICLES: GEISTHAWK Volume 2 is scheduled to arrive in comics shops this month. Get it, and grab yourself a copy of Volume 1 before the prices go up. This series should not be overlooked. It’s a strong contender to make my BEST NEW SERIES OF 2012 list. Fans of horror comics with continuing protagonists like HELLBLAZER, SOLOMON KANE, BLADE, HELLBOY, B.P.R.D . and GHOST RIDER will find familiar ground here, but with a little different spin. John Tower seeks to eliminate dangerous creatures, but he does it for profit. Hard-core aficionados may feel like they’ve seen this before but it’s the presentation that makes the difference. Legendary Pictures mastermind/founder Thomas Tull is responsible for the Legendary Comics d
Post a Comment
Read more

Not feeling so MARVEL-ous NOW 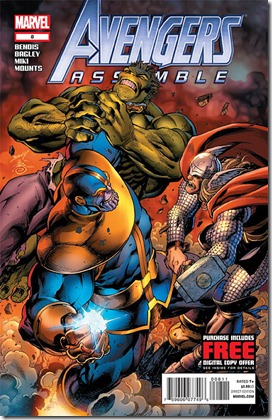 These may be the last MARVEL titles that I review for awhile.  At one point, I was feeling like I neglected the MARVEL books by focusing so much on DC NEW 52 .  That prompted my decision to follow closely the events of AVENGERS VS. X-MEN and report on them here.  Now that things are wrapping up,  I’m feeling a little overweight and need a change to my diet.  I’m not saying that I will no longer review any MARVEL books here.  I’m just taking a break.  After reading the descriptions of the new MARVEL NOW titles in PREVIEWS    - - I haven’t ordered a single book.  While some of the writer/art teams seem interesting there is nothing here  than I consider a must-read.  I’m going to see what books the critics and fans are favoring in the coming months.  Then, maybe in six months time I’ll pick up one of the trade paperback collections.  We’ll see.  In the meantime, maybe a different BC Refugee will pick up the mantle and keep you informed of all things Marvel? AVENGERS ASSEMBLE #8  (
Post a Comment
Read more
More posts