Showing posts from July, 2013
Show all

from the official press release . . . . . BALTIMORE, MARYLAND - July 22, 2013 - That's right! Kevin Smith and Jason Mewes will both be appearing at this year's show to promote their new animated feature, Jay and Silent Bob's Super Groovy Cartoon Movie! Best known for their roles as Jay and Silent Bob in the View Askewniverse films, which includes Clerks, Mallrats, Chasing Amy, Dogma, Jay and Silent Bob Strike Back, and Clerks 2, Smith and Mewes are fan-favorites among comic and movie enthusiasts alike. Their careers span appearances in film, television, and video games, as well as hosting a series of podcasts on their online network, SModcast.  In addition to his acting career, Smith is a well-known comic writer, having worked on such titles as Batman: Cacophony, Batman: The Widening Gyre, The Bionic Man, Daredevil, Green Arrow, Green Hornet, and Spider-Man/Black Cat: The Evil That Men Do . In 1998, he received a Harvey Award for Best New Talent. View Askew and The B
Post a Comment
Read more

Ed McGuinness is the latest guest at Baltimore Comic-Con

from the official press release . . . . . BALTIMORE, MARYLAND - July 23, 2013 - The Baltimore Comic-Con is excited to announce that superstar artist, Ed McGuinness will be attending  this year's show, taking place September 7-8, 2013 at the Baltimore Convention Center. A fan-favorite artist, McGuinness will be making his first appearance at the Baltimore Comic-Con this year! Ed McGuinness broke into the comic industry in 1995, working on three issues of Harris Comics' V engeance of Vampirella . After working on a few titles for Awesome Entertainment, including Fighting American and Youngblood , he took over art duties on Marvel Comics' Deadpool in 1998. Since then, he as worked on such titles as Captain America & Bucky, Captain Marvel, Mr. Majestic, ThunderCats, Ultimate Enemy, and World War Hulk: X-Men, as well as original covers for Wizard magazine. Best known for his work on DC Comics' Superman , Superman/Batman and Marvel's Hulk working with long-tim
Post a Comment
Read more 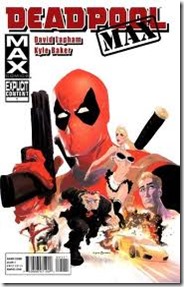 DEADPOOL MAX #1-12 (Marvel, December 2010 – November 2011) David Lapham, writer. Kyle Baker, art. VC’s Clayton Cowles, letterer. Explicit Content.                                                                         Deadpo ol remains enormously popular, as evidenced by the plethora of Marvel titles in which he appears.  Some of the more discerning readers have had our fill of the wacky mercenary with ninja skills and powers that make him incredibly difficult to kill, while other readers just can’t get enough.  Many of us recall fondly the early days of the title and some classic tales from Kelly, Priest, and Palmiotti.  Flash forward to 2010 and the Marvel Max line of books:  When a writer as skilled as David Lapham gets his hands on the character and gets the freedom to explore controversial subjects then we all need to pay attention.  DEADPOOL MAX is a juicy slice of dementia with a generous sprinkling of laughs laced through its fatty veins.           In this version of th
Post a Comment
Read more

By pghhead - July 20, 2013
Crystal Productions debuted in May 2013 with SILENCE AND COMPANY, an intense crime thriller centered around a disgruntled hitman who discovers and then exposes an international crime syndicate with deep roots. We received a preview copy courtesy of Captain Blue Hen Comics in Newark, Delaware and wrote a review which posted on their website. You can read the full review at this link . . . . . http://www.captainbluehen.com/2013/07/16/silence-and-co-a-hitman-uncovers-a-global-laundering-network/
Post a Comment
Read more

While I'd much prefer to be posting this live from the convention, thanks to the magic of a live blog invite I can share some of the news. Marvel used their first House Of Ideas Panel today at SDCC to promote Infinite Comics, Marvel Unlimited, Marvel AR, and Marvel original video programming on the Marvel.com website. Hosted by Arune Singh, the House Of Ideas panel included Ryan Penagos, Brian Michael Bendis, Axel Alonso, Ty Jefferson, Ron Perazza, and C.B. Cebulski. Brian Michael Bendis talked about his Guardians Of The Galaxy Infinite Comic after a brief video for Infinite Comics was played. This digital-only comics provide single panels that reveal more detail and expand as the reader clicks on the images. He explained "we work Marvel style on the scripts, which is kind of like doing a book report on a book that doesn't exist and then letting the artist work with it." Axel Alonso has high expectations for the format as he explained "with Infinite Comics we&#
Post a Comment
Read more

A-1: A New Source for High Stimulus Weirdness 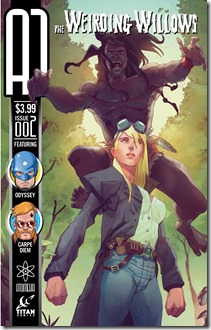 A-1 #2 (Titan Comics, August 2013 http://titan-comics.com/ ) It’s nearly impossible to try and figure out what direction these tales are headed in.  The unpredictable  nature of A-1   is a big part of the charm and is responsible for its’ allure and quirky goodness.            The second issue of this science-fiction/fantasy themed anthology returns with the next chapter in the three serialized stories from the debut issue last month.  The high quality art and colors throughout all stories really draw attention to this title and dazzle with a vivid wash of colors on high quality paper.                     The overlapping of classic characters from literature continues in The Weirding Willows by editor Dave Elliott and illustrated by Barnaby Bagenda in a style that resembles painting on canvas.  Just as Mogwai made an appearance late in the story last issue, a famous doctor’s monstrous creation intrudes upon the final panels this time.  The setting is now confirmed as 19 th centur
Post a Comment
Read more

JUSTICE LEAGUE INTERNATIONAL VOLUME 1: THE SIGNAL MASTERS (DC, reprints #1-6 from 2011-2012) Dan Jurgens, writer. Aaron Lopresti + Marco Castiello, pencilers. Much lighter in tone and presentation than JUSTICE LEAGUE (its’ brother/sister title), JUSTICE LEAGUE INTERNATIONAL was one of the early casualties of the DC New 52 and lasted just twelve issues. This trade paperback collection reprints the first six issues (story arc plus epilogue) and will provide a very entertaining read for anyone who missed this during the initial invasion of new titles. I suspect that may be exactly what happened to this book. It could be it just got lost in the glut of new team books that DC introduced in the same month. Based on the story here, that’s too bad. Dan Jurgens (an accomplished scripter who created the Booster Gold character who leads this new team) managed to squeeze in a large amount of character development while the story unfolded, and could have fleshed this out into a monthly wort
Post a Comment
Read more