By Jeff Metzner - July 01, 2011
We're nearing another Marvel movie, so the Mighty Marvel promotions department is once again filling shelves with appropriate books. (There aren't a lot of new X-Men books, though, presumably because that's a Fox movie that only profits Marvel indirectly.) Here are my brief impressions of some recent Captain America releases. More to come later, but I'm behind in writing about the rest of the books I've got on hand and it seemed like an appropriate weekend to have Cap on the blog.

Captain America Omnibus: Collecting the earliest Silver Age cap solo stories by Stan Lee, Jack Kirby and Jim Steranko from Tales of Suspense #59-99 and Captain America #100-113. As with the Thor volume I didn't reread these stories now for time reasons and because I've read them multiple times, but if you don't own copies of or haven't read this material I highly recommend it. Even at full list price ($99), which you probably won't have to pay, this is a pretty good deal for almost 50 issues of classic comics. (The Steranko material alone is almost worth the price of admission if you haven't seen it before.)

Ultimate Captain America HC: The Ultimate Universe version of Captain America is a very different character than the familiar Marvel U Cap. Frankly, I'm not sure I like him very much as a person but I do find him interesting. Jason Aaron's story here goes much deeper into what makes Ultimate Cap tick than has been done in The Ultimates, as he's faced with the Vietnam-era super soldier the government tried to replace him with while he was presumed dead. (It's a character with a Marvel U counterpart, but not the one you expect.) I especially liked the ending, which works on more than one level. Ron Garney, one of the great Cap artists of all time, turns in some of his best work here. If you can handle the mental adjustment from the Cap you're probably used to, then I think you'll like this a lot. 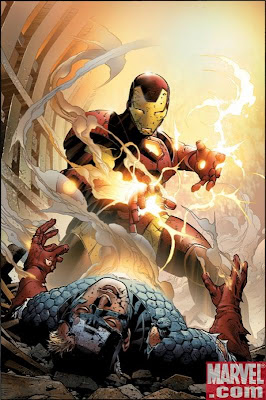 Iron Man/Captain America TP: A selection of 20th century Iron Man & Cap team-ups under a gorgeous Jimmy Cheung cover. Steve and Tony are at odds in most of the stories, so they might as well have called it "Iron Man vs. Captain America" (I'm a little surprised there's not any Civil War material included, actually.) None of the stories are particularly memorable, except for a Stan Lee/Don Heck story from Tales of Suspense #58 (just before the Omnibus starts) and a Mark Waid/Ron Garney classic from Sentinel of Liberty #5-6 (which is available in the complete Sentinel of Liberty volume).

Captain America vs. The Red Skull: Another anthology, featuring just what it says on the tin. Most of these stories are pretty good, as the Skull is Cap's ultimate villain and so writers often did some of their best work when using him. I could have  lived without the 1940s Cap #1 reprint and the Tales of Suspense stories from the Omnibus, but otherwise this is good (but not outstanding) material.


Captain America by Jack Kirby Omnibus: Collecting the Cap stories from Jack Kirby's return to Marvel in the late 1970s. I hated hated hated these stories as a kid, before I knew who Jack Kirby was, so I was especially interested to see how they held up today now that I'm appreciative of Jack's work. "Trippy" is not a word I use very often, but I think it perfectly describes these stories. I had fun rereading them, but boy do they jump from one idea to the next really fast. Kirby creates a secret society within American society that gives him the freedom to do wacky monsters and technology, and also has the nice side effect of making the stories a little less dated. It's still obviously '70s, though, and Jack's attempts at doing black culture were probably progressive at the time but a bit embarrassing now. Overall, though, I'm glad to have this collection but I'm not sure I'd recommend it to anyone other than a Kirby completist.

Captain Britain: Birth of a Legend: I'm including this because the middle third of the book is a storyline that includes Captain America and the Red Skull. These are the original Captain Britain stories from before Alan Moore and Alan Davis took over. At the time, they were presented as an 8-page weekly serial written by Chris Claremont (later Gary Friedrich) and mostly drawn by Herb Trimpe. The serials tend to go on a long time: the Captain America one is so long that one of the later chapters ends with "Next: Finally a conclusion!' and then goes on for three more weeks. I'm the target audience for this book because I love the Captain Britain character -- I actually used to own a few original issues reprinted here that I found at a flea market or something -- but unless you are too (or you're a Captain America completist) these stories aren't really good enough for me to recommend this book at this price. (But if you can get it cheap, go for it because they are fun.)

Captain America: The Fighting Avenger: Reprints the first and only issue of what was supposed to be an ongoing all-ages series similar to "Thor: The Mighty Avenger". It's not quite as good as the "Thor" book, but it's a fun well-written take on the character and worth reading. The rest of the digest-sized book is taken up by some Cap-featuring reprints from some of Marvel's other all-ages book. I wish the Thor/Cap Free Comic Book Day issue had been included, but this is a nice package especially for younger kids who enjoy the movie or the Avengers cartoon.