Wow!  Look at that art!  This is definitely going to make my list of nominations for “Cover Of The Year 2010” if and when there is a first annual BC Refugees Awards. 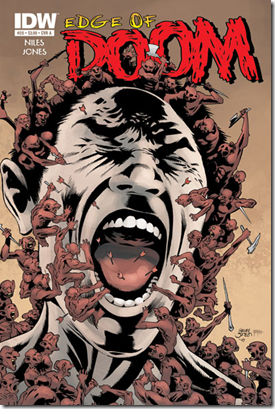 The combination of Steve Niles and Kelley Jones on a horror story is unbeatable.  EDGE OF DOOM is better at evoking the mood of CREEPY and EERIE with just a twisted touch of strange - -  it would have been a perfect tale for the revived CREEPY except for its full-issue length. The art is part Richard Corben, part Steve Ditko in its vivid and horrific imagery.  It made me remember and miss those weird back-issue tales (usually with art by Ditko) that used to end up in the concluding pages of the old Marvel monster comics from the early 1960’s.

Richard Stallman is depressed and drunk.  His wife left him, and he’s about to lose his job and possibly his home.  When he strikes a large stone in his backyard while mowing the lawn, it opens a gateway to a world of tiny little cannibalistic savages who engage Stallman in fierce battle.  I loved every panel of it.  Highly recommended.

Shoot!  I liked this so much I’m really sorry that it had to end . . . . . and, with this being a “one-shot”  there’s no Issue #2 to look forward to. Maybe it will sell enough copies to prompt DC to consider some more issues.  Of the three good stories included here, the opener is reason enough to pick this up.

If these four books I’ve chosen to profile here have anything in common, it’s their covers that capture your attention and make you want to find out what the story inside is about.  Looks like this is nominee #2 - - whoa, slow down.  I don’t want to get carried away with this idea.  Still, this is one of the better covers for a horror book I’ve seen in any year. 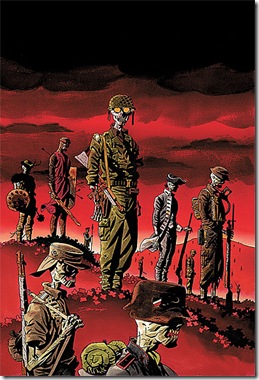 “Armistice Night” by Darwyn Cooke and Dave Stewart is ghastly good fun. It’s the one night each year when skeletal soldiers from various periods of history gather together for fun, fighting, and contests of battle prowess.  Where else can you find General Robert E Lee sharing his Kentucky Bourbon with Hannibal, Churchill and Rommel at target practice, or Joan of Arc trying to shoot an apple off Ghenghis Kahn’s head with an arrow?

“The Hell Above Us” by Ivan Brandon and Nic Klein takes place during World War II as the lone survivor of a sunken submarine decides to swim to the surface.  After all, he’s been living underwater without food or company for 30 years and hasn’t died yet - - so why shouldn’t he be able to hold his breath that long?

Jan Strnad and Gabriel Hardman in “Private Parker Sees The Thunder Lizards” tell an engaging and moving story of loyalty on the battlefield, friendship and payback, and the power of imagination to overcome lousy odds - - or at least enjoy yourself until the end.

On the one hand all three of these stories can be viewed as glorifying warfare, but that’s just on the surface.  Every single story in WEIRD WAR TALES has a little message or moral to share - - to make you think twice.    Good stuff here.

Wow, Part 2!  Check out this cover!  Ominous and a little symbolic, it scarily hints at the contents inside.  Yes,  I’ve found 2 nominees for my “Cover Of The Year” award in the same article.  (It could be a long winter). 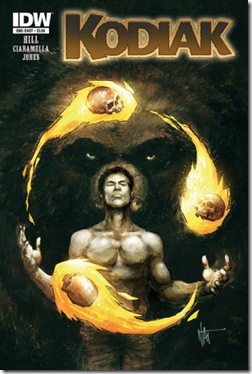 KODIAK is a medieval fable that recalls the short morality lessons of the Canterbury Tales.  Two young lads learn of a visitor to their town, a man with a scarred face and a reputation for killing a bear with his hands.  They yearn to catch a glimpse of him, are discovered, and learn that the story is but a legend - - but it does involve the man, a traveling carnival in which he worked as a fire-eater and juggler, and included a large bear used for fighting dogs and wagering.  There are some horrific and violent elements to the story but it all turns out well.  Joe Hill is gaining a reputation as a respected horror writer (HEART-SHAPED BOX ghost story) as well as the author of the LOCKE & KEY series, also from IDW.   The art by Jason Ciaramella has a painted look, and a whimsical quality (credit the colors by Jay Fotos for subtly enhancing this) that is perfect for this type of story.  Recommended.

Here’s another fun cover, but not one to compete with the other two and earn a nomination from me. Still, anything that reminds me of a classic Bruce Lee movie poster will bring a smile of recognition . . . . and make me curious enough to want to read the story.  A young, aggressive and eager student of the Shaolin feels he is ready for the initiation test after just two weeks.  His  instructor encourages patience and shows him the location of the special 36th chamber of Shaolin, which none of the other students are aware.  The student feels he can prove he’s ready by entering the chamber and learning the forbidden secret.

He ends up freeing a host of demons who invade the innocent souls of the other students and turn them into ninja zombies.  There’s some puns and inside jokes that will make you either grin or groan, but this book is fun and it’s all over with in a hurry.  If you are a fan of Chinese kung fu movies and manga, or just admire the work of artist Ben Dunn you will certainly appreciate this. For others, it’s an acquired taste - - but here’s a single example of it if you want to explore.