EDITOR’S NOTE: This article should not be interpreted as an endorsement of the President-Elect and/or his policies and character. However, we reside in a country where we enjoy freedom of choice. Recognizing that some of our readers may have voted for him or would be interested in learning more of his background, we have decided to post the following press release from TidalWave Productions. We respect their objectivity in publishing biographies of prominent news figures, regardless of their personal philosophies or interests.  . . . . . .

Political Power Donald Trump: The Graphic Novel, will be in stores and available digitally Wednesday, January 18.  It the latest addition to the successful line of TidalWave’s biography titles. The graphic novel is released in conjunction with the Friday, January 20th Inauguration of the 45th President of the United States, Donald Trump. 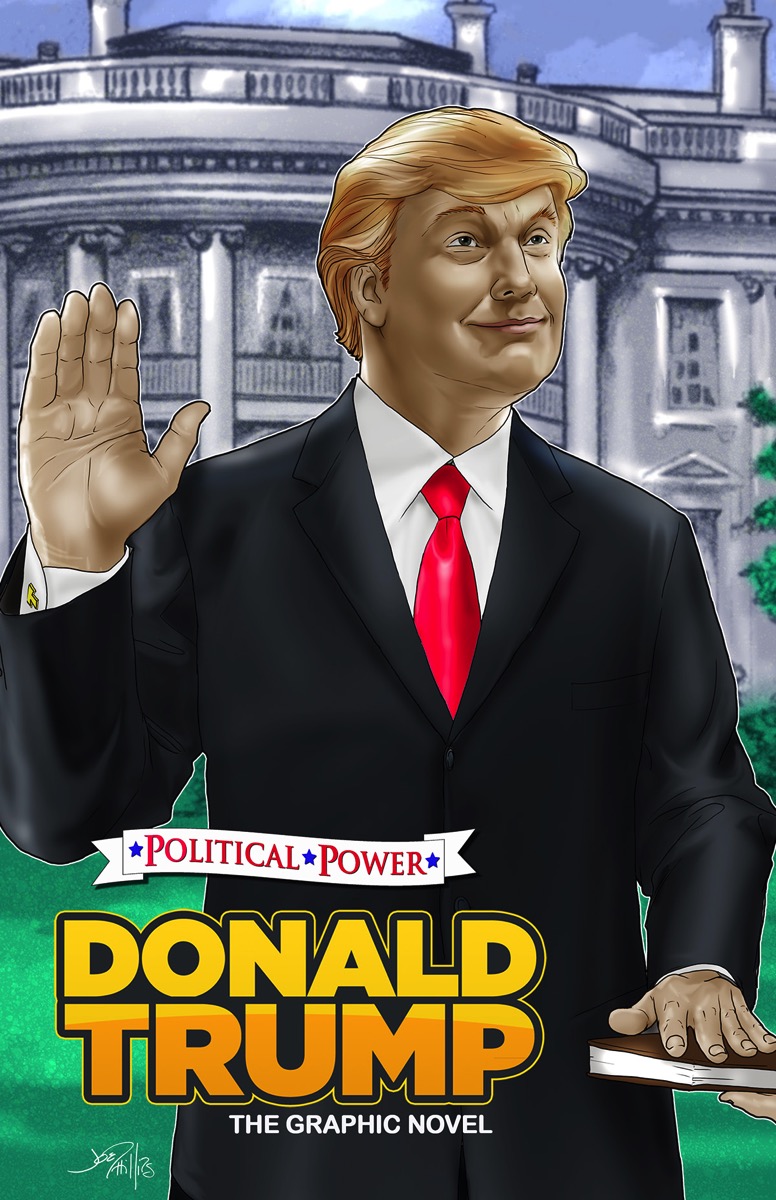 One by one, his opponents fell to the will of voters who saw Trump as the savior of a country where the American dream seemed broken and unattainable. On the heels of one of the most divisive elections in modern history, will his vaunted ego cause one of the most influential men in America to save a country, or destroy it?

This 60-page volume features pin-ups from TidalWave artists and chronicles the ascension of Trump from his youth, when his family instilled in him ambition and energy and how he combined that with skill and drive to earn build a real estate and media empire.

"TidalWave has two mandates for their profiles of political figure. The first is to keep it fair. The second is to consider the audience. Who would read a book about President-elect Trump? Likely his fans would be more apt to pick it up, so presenting a biased point of view would not be appropriate especially since schools are picking these books up too,” said Frizell.

Since 2008, TidalWave’s (formerly Bluewater) publishing line has been addressing current events and releasing entertaining biographies of the men and women vying to become America’s next leaders, a fact which makes publisher and President Darren G. Davis proud.

“Growing up, I was a reluctant reader. We hope to reach kids in similar situations that may be more apt to read when a comic book is placed in front of them,” said Davis. “I have guest taught in schools and found comic books to be an excellent way to reach children and young adults.” Davis also added that understanding the realm of politics may seem daunting to some. “It’s my hope that these informative and entertaining books teach readers about the candidates. Comic books have grown up; they’re not just for kids anymore.”

Over sixty subjects have been created in comic book form from TidalWave, such as Hillary Clinton, Barack Obama, Ronald Reagan and Condoleezza Rice. Upcoming subjects are Michael Pence, Elizabeth Warren and Alexander Hamilton.

TidalWave's biographical comic books have been featured on CNN, Politico, Roll Call, The Today Show, FOX News, and in People Magazine among thousands of others. “Comics promote literacy,” said publisher Davis. “It’s my hope that in addition to fans of the candidate that younger readers will learn something about how our political process works.”

Print copies can be ordered exclusively at ComicFleaMarket.com.