a book that exudes the late 1970’s UK punk rock emotion and attitude in several ways. The format is heavily reminiscent of the art style on the first album by the seminal punk band, The Sex Pistols, from it’s black and white and blue-tinged photos to the slogans and quotes pasted all over the pages in haphazard fashion.

The contents treat the conventions of the traditional business world in irreverent and humorous fashion.  Yet, the book contains enough chunks of wisdom to be of value to any modern start-up company.  It’s chock full of  Brewdog founder James Watt’s mantras and catch-phrases.  It’s the most funny and entertaining business book I’ve ever read.  If they were all like this, I might read more of them.

Watt is the co-founder (with best friend Martin Dickie) of BrewDog which started very small in native Scotland and grew from there. Sometime in the first quarter of 2017, they will cut the ribbon for their first brewery in the United States (Columbus, Ohio). Watts is not just a street-smart business leader. He earned his chops as a qualified deep sea captain, and holds honors degrees in both law and economics.

In Watt’s philosophy, the key is not to start a business, but to begin a revolution. His company, Brewdog, grew to it’s position as one of the better and fastest growing businesses through hard work and a lot of enthusiastic faith that transferred to employees as well as loyal customers. Everyone embraces the mission, and that is to create passion for craft beer.  Business plans are scrapped for missions.  They don’t hire sales people; they employ missionaries to help spread the word. 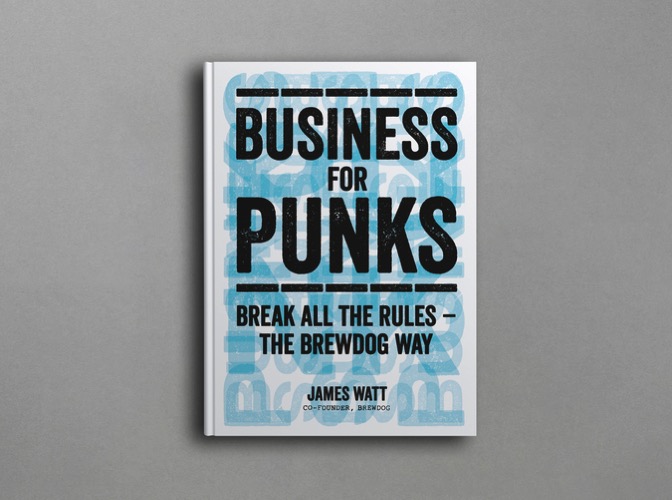 How they accomplished this is summed up in the pasted captions in the book’s prologue: “We tore up the business rule book and did things on our own terms.”  From there, Watts lays out his philosophy and rules in seven sections that cover everything from start-up to financing, marketing, sales, team-building and a lot of attitude.  Along with the revolutionary ideas, readers get a biography of sorts and background details of Watts and Brewdogs’ rise to glory.

Unless you’re a straight-laced suit who’s downed too much of the corporate Kool-Aid, you’ll finish reading BUSINESS FOR PUNKS and want to do one or all of three things:  1) Start your own business. 2) Go buy some Brewdog product 3) Invest in the future of Brewdog.  Me, I’d love to drink a good, hearty beer with this guy.