BOX OFFICE POISON  is not a brand new book, but an established and acclaimed comics creation being presented in a new format, and colored for the first time. 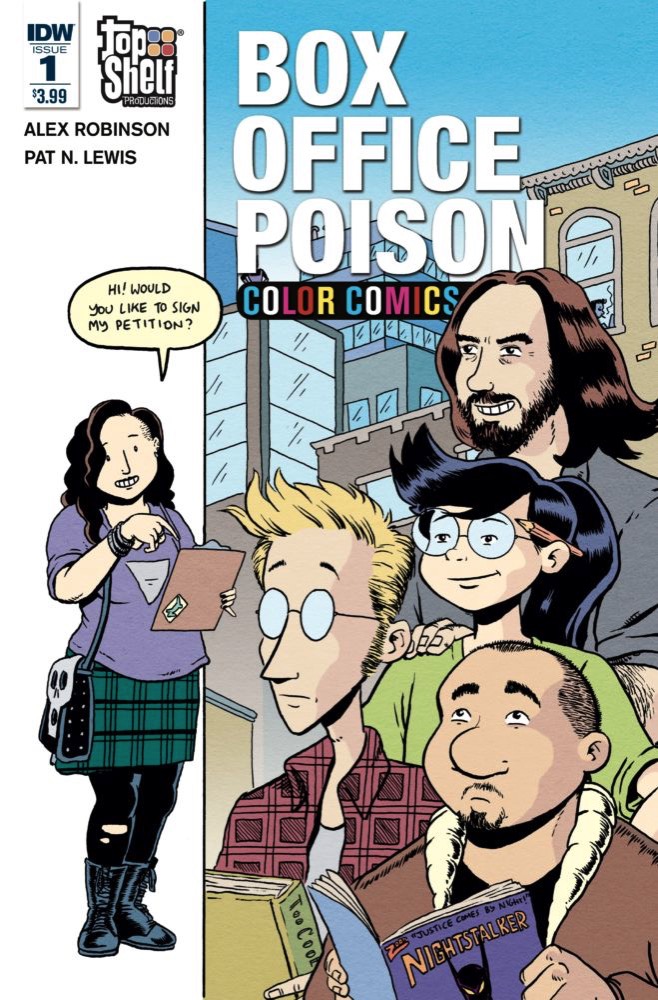 In its’ original format (single issues published by Antarctic Press, and later collected in a Top Shelf trade paperback edition) BOX OFFICE POISON won an Eisner Award for Talent Deserving Wider Recognition, and was nominated for a Harvey Award as well. It also won the International Comics Festival Award for Best Debut Graphic Novel (Angouleme, France) and was voted by Wizard Magazine as the best indy graphic novel of all time.

Although it covered a lot of ground in it’s original 608 pages, BOX OFFICE POISON is essentially a romance comic that follows the lives and adventures of several twenty-something young adults living in Brooklyn in 1994 and later.

This new edition picks up the story as originally presented in Issue #3.  Sherman is a recent college graduate, now working as a bookstore clerk and moving into a new apartment with his struggling cartoonist friend, Ed. In flashback scenes, we learn that Sherman is still pining after his last serious girlfriend, who broke up with him while in college together.  We also meet Stephen, history professor and Sherman’s new landlord; and Jane, also a cartoonist living in the same apartment interest who may turn out to be Sherman’s new infatuation.

Writer/artist Robinson places images of his real-life friends and family in the background of several panels, and also mixes in a healthy dose of pop culture references throughout his narrative.

STORY:  While the story is interesting and mostly serves as an introduction to several of the main characters, it’s hard to see what makes BOX OFFICE POISON remarkable enough to garner so many awards and nominations. However, this is not the whole body of the work, just the tip of the iceberg. We are intrigued and want to see more before making a conclusive decision about it.  2 POINTS.

ART: A very whimsical, clean and friendly style to compliment the whimsical story. Robinson’s art will remind readers familiar with indie comics of auto-biographic comics in general, and the specific styles of Daniel Clowes and Eddie Campbell. 2 POINTS

COVER:   When I first saw it, what came to mind was an indie version of Archie Comics.  Seems fairly appropriate  1.5 POINTS

READ AGAIN?  Yes.  Although, we suspect readers will either like this enough to keep going, or just plain hate it. 1 POINT.

RECOMMEND?  That’s hard for us to do at this point, as we’re not sure that we want to read such an extensive work.  However, it’s a refreshing change of pace from superhero, crime, horror, and action comics — and amusing as well.  ZERO POINTS for now, until we make up our mind.

TOTAL RATING: 6.5 POINTS.  It’s a judgment call for readers. Hopefully, we’ve shared enough information about it that those readers who would be interested in this type of book will pick up the issue and give it a chance to win them over.