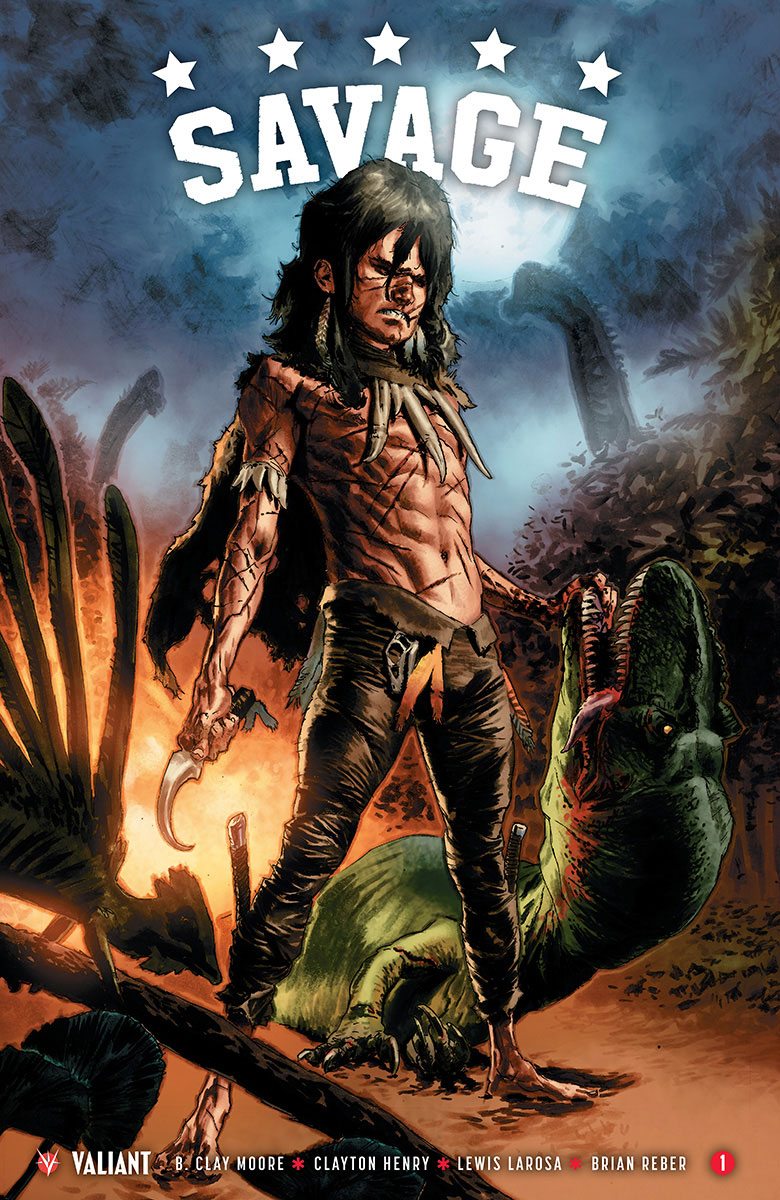 It’s all about the art. Even though SAVAGE #1 introduces a brand new character and setting to the Valiant Un 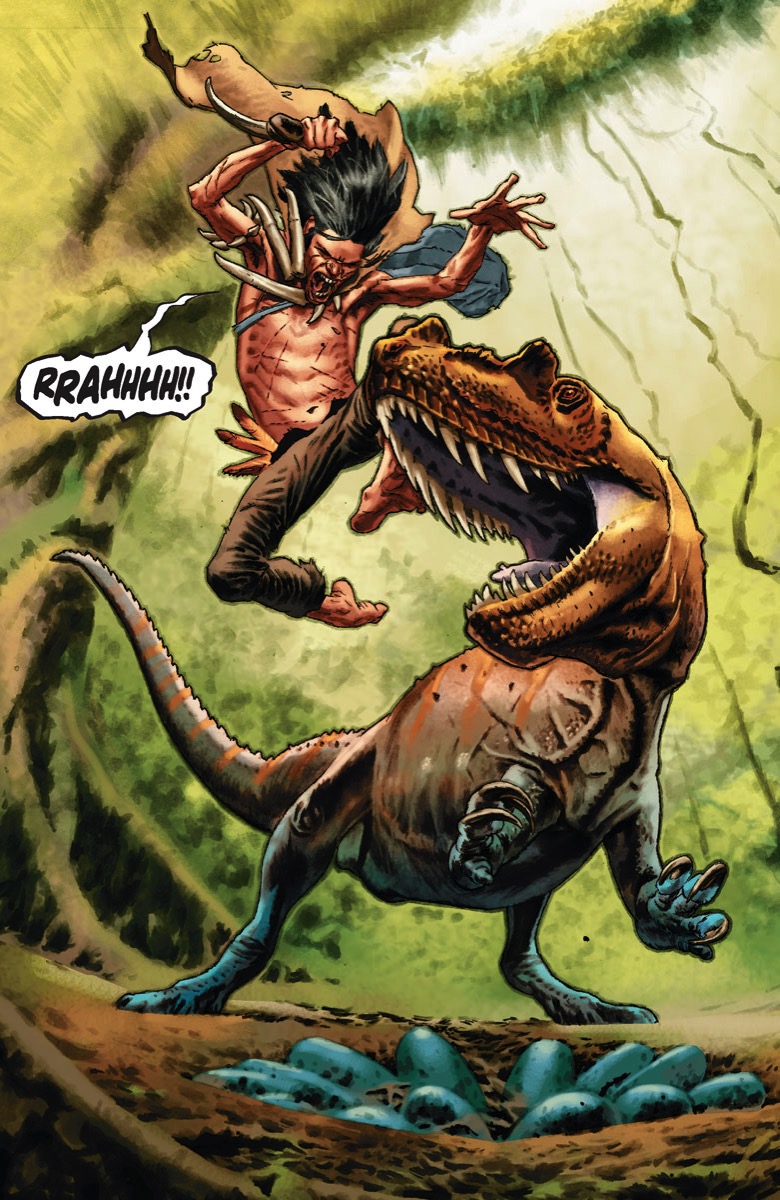 iverse, the art dominates the first issue.  Rather than tie up the reader with a lot of explanation, the story unfolds at a relaxed pace and allows the art to show us what we need to know. That’s a wise choice, because the art is incredible.

In fact, the first seven pages are completely free of captions and dialogue, with just a few text sound effects for emphasis. The art team turns in a superb performance.  The illustrations are gorgeous. The colors are vibrant. The images pop off the page.

We are in a savage land (hence the title). The exact location is not revealed. Man will engage beast in combat to the death, animal savagery versus dinosaur fury. We are apparently witnessing the main character, a teenage jungle warrior, in action as he stalks and attacks his prey. We witness his fighting skills, his bone talon weapon, and get a glimpse of his dwelling and apparently solitary lifestyle.  He is not well-groomed and mannered as in the comic book versions of TARZAN OF THE APES. He is also not handsome with long blond hair like KAMANDI, THE LAST BOY ON EARTH.  This new character is grubby , unkempt, and needs a manicure.  He’s ugly.  Given the circumstances, that seems realistic.

The rest of Issue #1 flashes back to the incident that apparently brought this about: a plane crash at sea when the teenager was just a baby.  A chartered jet is transporting soccer celebrity Kevin Sauvage and business manager/wife Veronica from Great Britain to the U.S.A., where he hopes to revive a recently sagging career.  That may be due to some problems with drinking.  Writer Moore crams a lot of insights into this seemingly happy married but struggling family into just a few pages before the crash that changes their lives.  From that point, the story deals with their survival (only the pilot dies) and preparations for a hopeful rescue. They just begin to explore the island they are stranded on.

How long Kevin and Veronica (Ronnie) will be a part of the story is not known, but we suspect it will not be long. In t 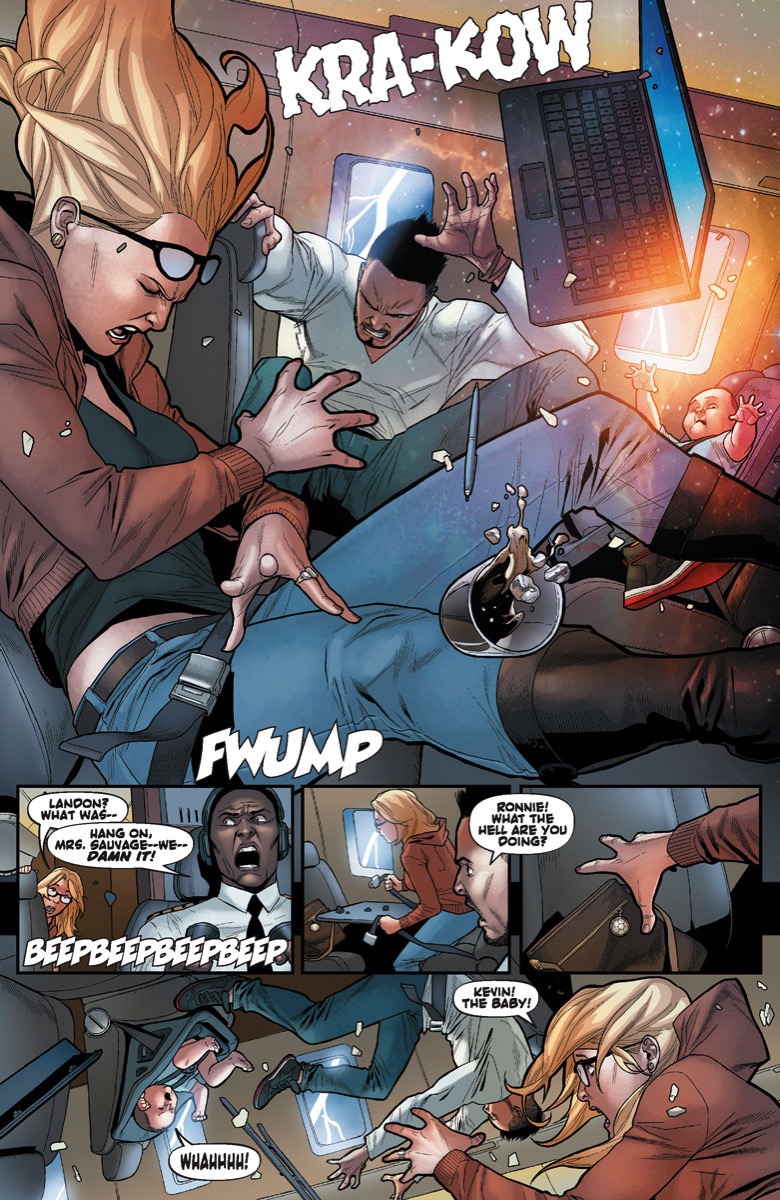 he short time we as readers are exposed to them, we learn of their strengths as well as their flaws. They are both likable characters, so we’re going to miss them when (as we suspect) they are eaten by the inhabitants of the island.

It’s a fast paced story, with incredible visuals. There are beautiful scenes of Kevin exploring the island, and a disturbing discovery of a grounded boat with dead and bloody passengers.

The story does raise a few questions:

1) Why isn’t the book called SAUVAGE, as in the last name of baby Kevin’s parents?  We suspect it’s because the book is about more than just one person — its about this strange, wild, “savage” world. And, we prefer that.

2) Is the island somewhere on planet Earth or in another parallel universe?  We have to ask, since it’s hard to imagine a island with dinosaurs remaining uncharted and undetectable to modern technology, considering our satellite view capabilities, etc.

3) Ronnie mentions two other children. They apparently weren’t passengers on the plane.  So where are they?  Wonder if they will play a role in future stories?

4) We’re also wondering if SAVAGE will be a stand alone story or later merge into the greater Valiant universe?  Okay with us if it doesn’t.  There is plenty of potential right here.

The back of the book contains some sketches and insights into the art styles employed, and some of the creative choices made regarding the main character. 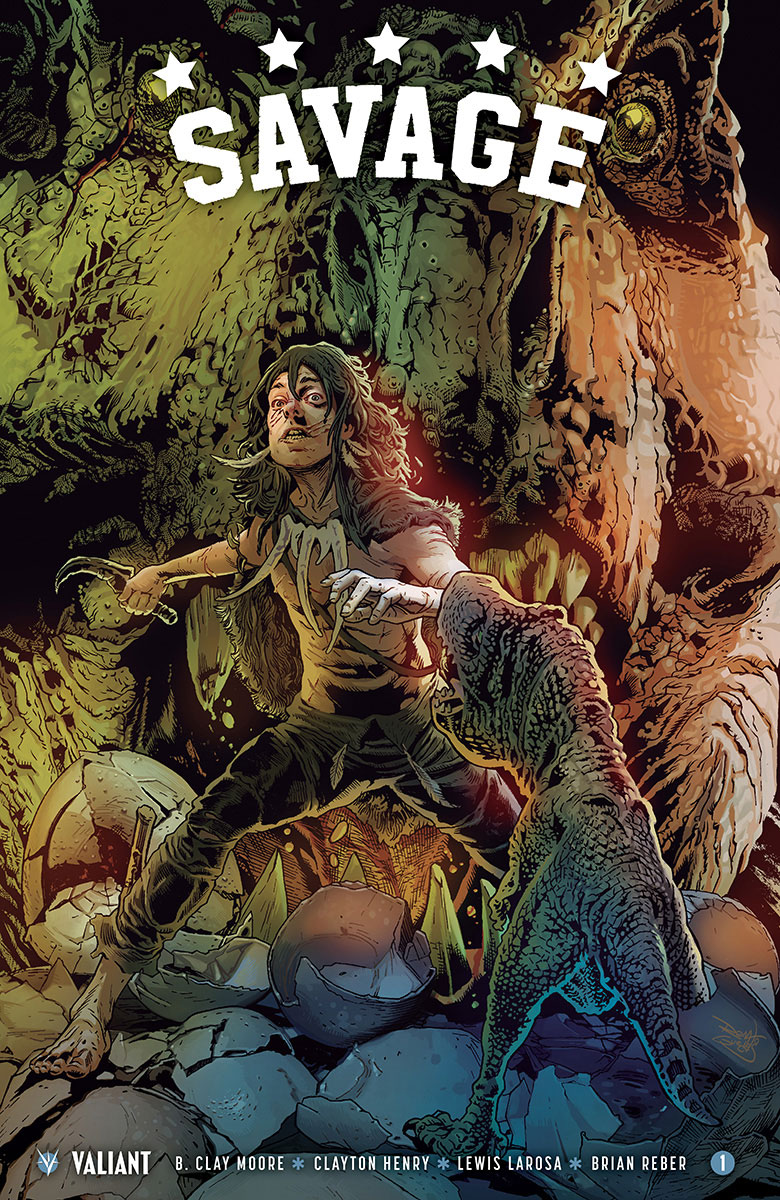 STORY: It’s not complicated, but it sure is fun. We love the story-telling methods employed.  2 POINTS.

ART: Even more impressive when you understand there are two artists at work here. Larosa illustrates the scenes that take place in the present, while Henry draws the flashback sequences. The styles are similar and the transition is seamless. You can appreciate both Larosa’s skill at creature creations as well as Henry’s great sense of body language and expression with the human characters.  3 POINTS

COVER:  This one shows you everything you need to know to decide if you want to pick up this book. That character is intimidating as hell. 2 POINTS

READ AGAIN?  Yes. We can’t get enough of the fantastic art. 1 POINT.

RECOMMEND?  Who wouldn’t want to know what happens next? 1 POINT.

TOTAL RATING: 9 POINTS.  Hard to find anything wrong with this one. If you like adventure, this is it. 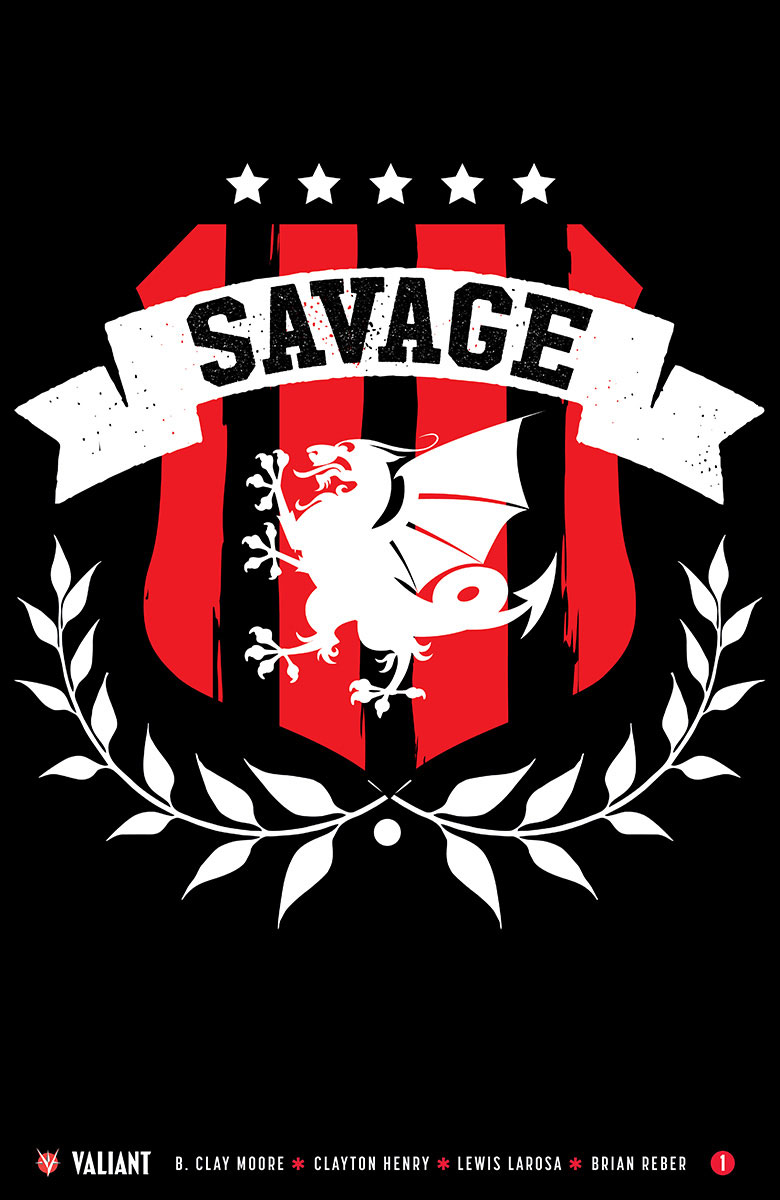