EDITOR’S NOTE:  We continue our spotlight on WEIRD DETECTIVE, our nomination for the Best Mini-Series of 2016.  It should also be in consideration for recognition in the horror genre, including the Ghastly Award and the Rondo Hatton Award.  We plan to review each issue, and hope to draw more attention to this deserving creative work of imagination.

Issue #2 ended on a real cliff-hanger.  Here’s the wrap-up from the spooky credits page:  “Detective Greene has managed to give his partner, Detective Fayez, the slip and continues his hunt for the Juice Box Killer!  Greene’s investigation leads him to the ‘tainted’ Anzio crime family’s barge in the harbor.  Has he found the answers, or is he in over his head?” 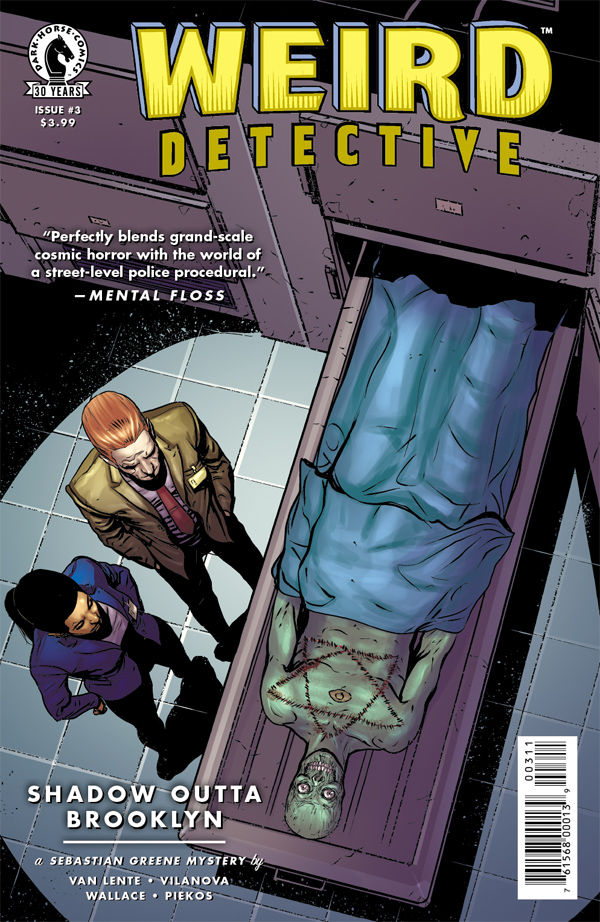 Issue #3 resolves the minor conflict introduced in the first two issues and moves toward solving the major threat in a fashion much like a police procedural, one of the genres this book respectfully pays homage to. We’re at the midpoint of the story, but side plots and insights are still being introduced. If readers don’t pay attention, they may get blindsided.

The alien Greene has a moment of doubt in which he considers giving up both the mission and his human form in order to stay within the collective consciousness of his race. Meanwhile, Sana Fayez, desperate to find something on Greene to prevent an impatient Chief Malone from demoting her, sneaks into his houseboat while he’s busy elsewhere. She finds the cat (who doesn’t care), Greene’s refrigerator full of diet soda (he can subsist solely on this due to the chemicals in the recipe), and evidence of his practicing the human Greene’s penmanship (he spells the last name wrong). She totally misses the shell of the real Greene, in suspended animation in the next room.

Meanwhile, Greene has to morph into parts of his alien form to survive the fight with the huge mother fish creature while Fayez concentrates on the rescue of Nunez Senior. A surprise is revealed concerning the character of the human Greene, which will complicate matters moving forward.

There’s a lot of fighting, fireworks and gun battles in this issue, all wonderfully illustrated by the art team. The colors and inks are perfect, with just the right amount of shadow to add more depth to the proceedings. 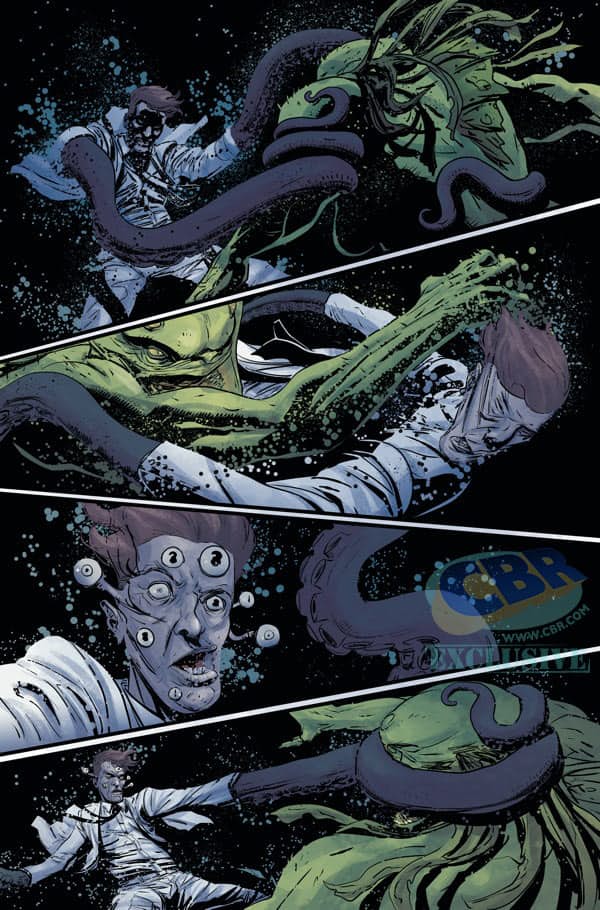 Greene and Fayez learn that the minor crimes division is to never upstage the major crimes department, and both are re-assigned. As Captain Leong aptly describes it ‘you are two misfit toys marooned on the same pitiful island.’  Some door-to-door canvassing (‘sucking up Trident off the sidewalk with your feet’) occurs, resulting in some funny conversations. The threat could be right under their noses, or maybe their feet.

The amusing Canadian references return this issue. We asked Van Lente about this shortly after Issue #1 debuted, and he replied that he’d already received some nice tweets about it from Canadians, who were equally amused by it.  The reason Fred made the alien Greene a Canadian was that he wanted aliens who weren’t immediately relatable to U.S. Americans.

EDITOR’S NOTE: we are postponing our normal BC Rating System for this issue.  Instead, we’ll use it to rate the entire series following our review of the remaining issues.