WOLFCOP returns for more movie-inspired mayhem, mauling, mutilation, brawls, booze, and broads.  It’s a drive-in B movie transferred to the comics page. The main protagonist from the two Canadian indie film classics returns, bringing with him capacious amounts of blood, gore, sex, and filthy language. There is just enough humor included to make the gratuitous amounts of blood and guts more palatable. The outrageous and over-the-top scenarios depicted here should convince most readers to not take this seriously, unless these are common occurrences in their neck-of-the-woods. 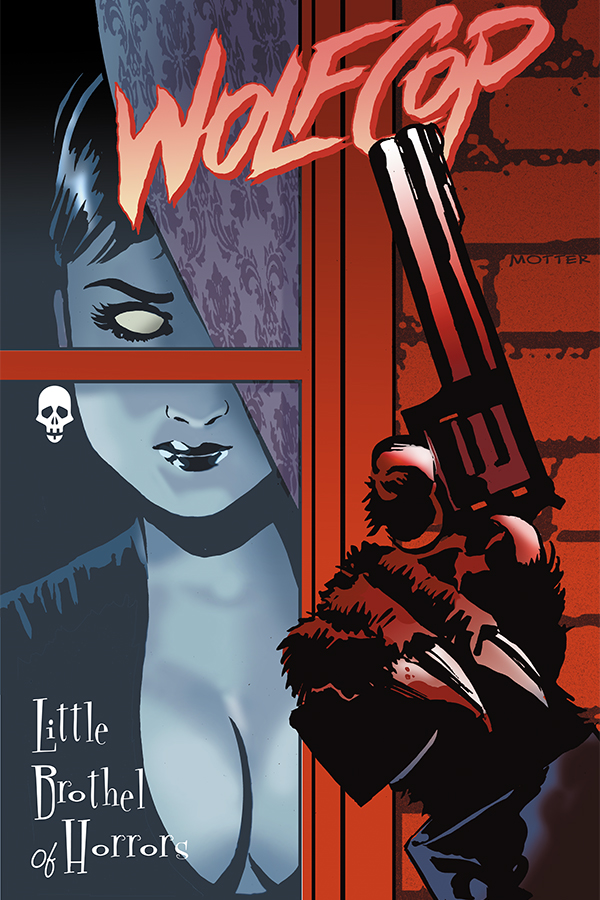 wolf police officer Lou returns along with roadie sidekick Willie. Their stolen police vehicle is still disabled from last issue, and Willie makes under-the-table arrangements with a mechanic to get it running. While he’s busy, alcoholic Lou wanders next door to the strip club.

Before long, both Lou and Willie wind up as guests at a whorehouse, where appearances can be deceiving. Seems this pair can’t go far without running into biker gangs, cannibals, zombies, vampires, succubi and samurai-wielding security guards (but not all of those in this issue, just some).  Of course, Lou manages to survive the craziest situations and he does so again.  Looks like he’s heading back home next issue.  We’ll probably tag along.

STORY: Tasteless good fun. A guilty pleasure for us, and perhaps some of our readers would agree. No redeeming merits. There doesn’t need to be much story - - just enough to set things up for page after page of action. That’s what we came for. There is some drama here, and a sad scene. But only for a panel or two. No time for tears.  1.5 POINTS.

ART: Amazing, and very graphic. Fans of horror comics will appreciate it best.  Allan Otero is a major talent. The colors by Arcana Studios are vivacious and explode on the page.  2.5 POINTS

COVER:   The most expressionistic thing about the entire book. Love the title.  1.5 POINTS

READ AGAIN?  Yes.  When you’ve had a bad day, and just crave an escape you turn to mindless entertainment. This is the place.  1 POINT.

TOTAL RATING: 7 POINTS. Pick it up and skim a few pages. That will help you determine if this book is for you.