Here’s what the Goodreads summary reveals about THE DEEP:

“From the acclaimed author of The Troop—which Stephen King raved ‘scared the hell out of me and I couldn’t put it down.…old-school horror at its best’ comes this utterly terrifying novel where The Abyss meets The Shining.

A strange plague called the ’Gets is decimating humanity on a global scale. It causes people to forget—small things at first, like where they left their keys…then the not-so-small things like how to drive, or the letters of the alphabet. Then their bodies forget how to function involuntarily…and there is no cure. But now, far below the surface of the Pacific Ocean, deep in the Marianas Trench, an heretofore unknown substance hailed as “ambrosia” has been discovered—a universal healer, from initial reports. It may just be the key to a universal cure. In order to study this phenomenon, a special research lab, the Trieste, has been built eight miles under the sea’s surface. But now the station is incommunicado, and it’s up to a brave few to descend through the lightless fathoms in hopes of unraveling the mysteries lurking at those crushing depths…and perhaps to encounter an evil blacker than anything one could possibly imagine.” 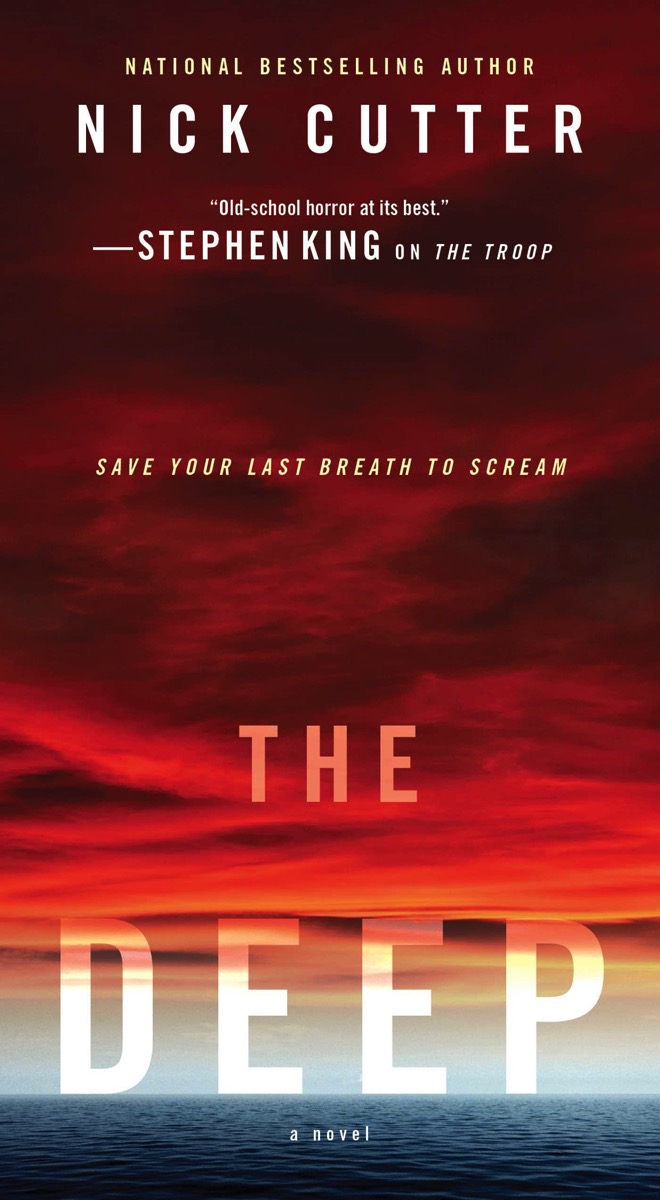 I finished reading THE DEEP in bed just before midnight on November 8 as the Presidential elections were wrapping up.  Not wishing to watch any more television news accounts of the voting, I went to bed shortly before 11 p.m.  I didn’t have a warm feeling about the results.  I wanted get a good night’s sleep rather than worry about the election. The rest of my family had also retired for the evening, and it seemed like a good quiet time to finish the book.

I wasn’t as disturbed by the ending of THE DEEP as I thought I might be.  As I read through the last third of the book I had a sense where things were going, so I wasn’t surprised.  The ending was satisfying but very ominous and dark.

A constant presence in the book is the sense of extreme claustrophobia, detailed in all it’s excruciating agony by the skillful pen of Nick Cutter. I got a personal preview of that as I read the last page in my bed, put the book down, and turned off the lights.  Surrounded by blackness, I closed my eyes and managed to fall sleep.

After waking, I learned of the shocking election results. I did not anticipate this outcome.  I’m afraid it’s an indication of the temperament of our nation.  It feels like I’m still engaged with the ending of THE DEEP.  Ominous. Dark.  I feel the walls moving in.

I still choose hope over hate. I’m hoping that a man who’s words can be so divisive can also become a changed man whose words can bring people together, to work together and accomplish something positive.

I didn’t mean to write a political commentary here. But, the connection between book and reality was so strange and ironic that I felt it relevant to mention. Let’s turn our attention back to THE DEEP, a book that has earned over 1,000 reviews on Goodreads.  Reader opinions are mixed, as you might expect from a horror novel as relentless, tenacious and malicious as this.

Nick Cutter is definitely a new voice in horror fiction, and one to keep an eye on. I’m certainly going to explore THE TROOP, his earlier novel as well as his other works.  Nick Cutter is a pseudonym used by Canadian author Craig Davidson to separate his horror fiction from his conventional literary fiction. His horror fiction seems to be out-selling his other works, which is good for horror fans.  There should be more to come. Before Nick Cutter, he also wrote two horror novels under the pseudonym of Patrick Lestewka.

The blurbs on the back cover of the paperback, as well as the summary at Goodreads and other sites can be a little misleading.  A reader might think that the ‘Gets is the primary conflict of the book.  It’s just the mechanism that Cutter uses to set up the real conflict — which occurs in the pitch black atmosphere that surrounds and applies pressure to the research station in the depths of the deep, deep sea.

The ‘Gets is a marvelous construction, a destructive cocktail of several diseases including Alzheimers, Parkinsons, measles and the bubonic plague. It’s a bit disappointing that Cutter didn’t see fit to add some more scenes about the outbreak and some of the consequences. Other writers might have devoted half a novel or more on this. Cutter obviously had a larger and more complex threat envisioned for this novel.

When we first hear of it in the early chapters, the virus is already widespread and gaining ground everyday. There is one extremely graphic and horrifying scene where Luke Nelson, the main character, tries to assist a victim.

A virus of this magnitude commands the attention of health organizations and governments across the globe, willing to spend the money and resources to find an effective means to eradicate it, or worse case scenario, contain it.  The discovery of “Ambrosia”, a mystery substance from the depths of the ocean that might protect its host from the ‘Gets, prompts the quick outlay of millions to erect the Trieste, a research station eight miles below the water’s surface to harvest and study Ambrosia in the deepest, darkest and coldest depths of the Mariana Trench.

Among the three scientists confined to that research station is the brilliant Clayton Nelson, the estranged older brother of Luke. One of those scientists fled the station, only to return to the surface in a mutilated state of death. Government agents soon contact Luke, when the research station loses communication with the surface. The last message received was a request for his assistance. Soon after, Luke is transported to the Hesperus, the massive ship that serves as the surface command center for the Trieste, being prepared for descent in a two-person sub to reach the undersea station and investigate.

Along the way the reader learns of Luke’s personal descent into despondency that occurred long before these events.  Luke is trying to reconstruct his life after the mysterious disappearance of his young son and the subsequent break-up of his marriage.  He and brother Clayton have sibling issues of incompatibility, perhaps brought on by a horrific childhood together suffering the torments of a dominating and character-destructive mother.  Confinement to the research station will soon cause these memories to come to the surface again, as Luke recalls all his childhood and adult fears in waking nightmares where the lines between reality and dreams blur and fuse together.

He does reach the station, courtesy of the capable navigation of Alice “Al” Sykes, a brave athletic Navy lieutenant who provides shuttle service between the depths and the surface. What they find are the two scientists working independently and secretive, along with two Labrador Retrievers, plus some mice and bees, all destined for experimentation with Ambrosia.

When some mishaps cause conditions at the research station to imperil sustained survival, neither scientist can be persuaded to leave.  Clayton is obsessed with studying the substance while the other scientist, Dr. Toy, has seemingly gone mad and locked himself in.

All this time in confinement, surrounded by darkness and icy, highly pressurized water takes its toll on the inhabitants.  Nightmares and waking visions constantly play with their sense of reality.  Cutter details the impact of such a claustrophobic setting for maximum impact. Each character is not only fully realized but each also experiences their own personal form of madness.  Are all these visions, one more horrific than the next, just in their heads or are they real?  Are there really miniature black holes opening up all over the ship, or are the inhabitants experiencing a shared hallucination?

Is Ambrosia a ruse, designed to provide a vehicle for something much worse than the ‘Gets to invade the surface world?  Or is it a universal cure for not only the ‘Gets, but other debilitating diseases as well? Trick, or treat?

Once we become immersed in the depths of this book, Cutter does not stop bringing the horrific visions, one after the other, each more gruesomely described.  Cutter excels at depictions of body horror and mutilation.

It’s not hard for readers to feel the fear of these characters as they try to overcome the challenges and find a way to leave.  Cutter makes you care, even when you may have to let go. At least, the ending provides a release.

THE DEEP is not flawless.  It does drag in passages, and some readers may grow weary of the numerous flashbacks.  However, the best parts are so engaging and creative that Cutter deserves the attention he is currently receiving.