What explains the fascination with American model Bettie Page?  Perhaps it’s her role as the  first “Queen of Pin-Ups” 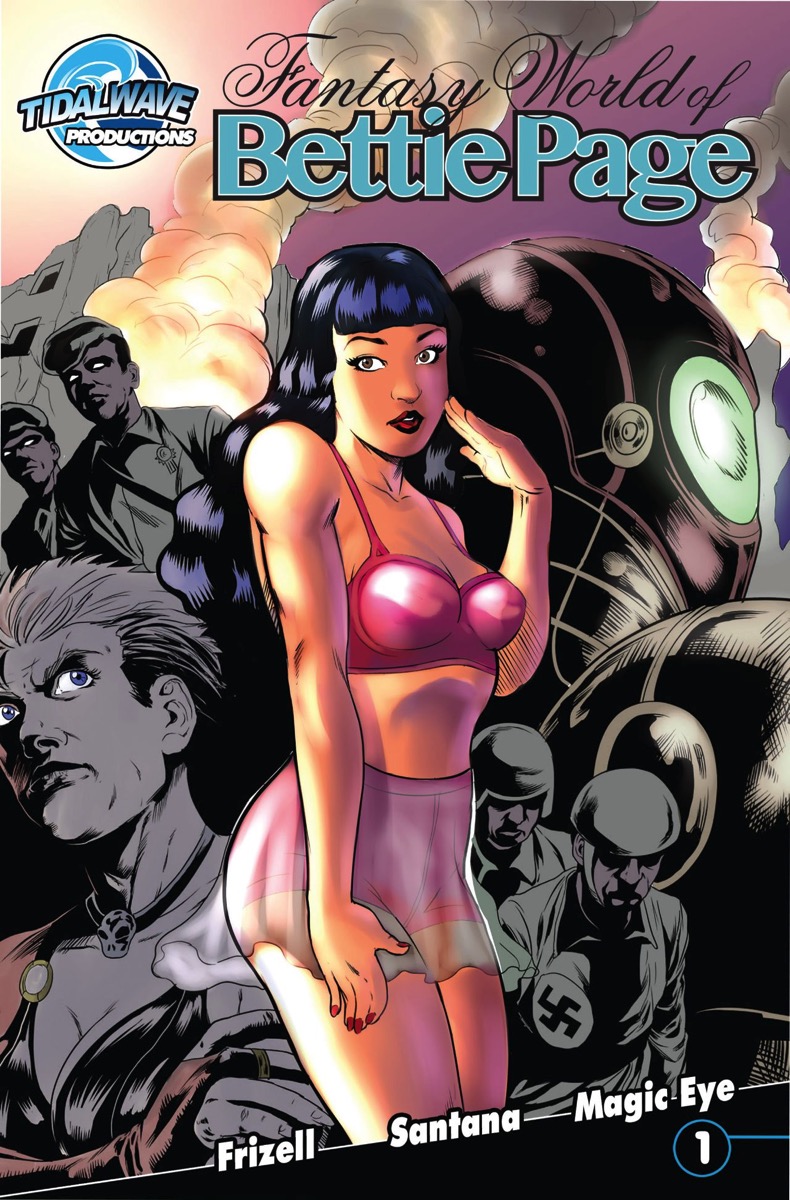 uring the 1950’s when her image, usually in swimwear or underwear appeared in many popular magazines of the time.  Or is it her notoriety gained from participating in mail-order bondage photographs and 16mm short bondage films for producer Irving Klaw?  Or perhaps it’s the attention she gained as a prime subject of investigation by Senator Kefauver and the 1950’s U.S. Senate Special Committee To Investigate Crime In Interstate Commerce, attempting to link her to problems related to growing juvenile delinquency and teenage crime?

Whatever the reason, she’s been the subject of study by many artists and creators for decades, and her image is still recognized to this day.  Perhaps it’s the girl-next-door, innocent country lass appearance she projects with jet black hair worn in bangs, blue eyes, and an engaging smile.  Even beyond her death on December 11, 2008 Bettie Page continues to be the subject of books and documentary films.  It was only a matter of time before someone would decide to feature her in a comic book.

Credit writer Michael Frizell for doing his research.  He blends historical facts about Page into his story of her involuntary involvement in a story of espionage with a heavy dose of science fictional / fantasy elements.  The dialogue does its best to showcase her Tennessee accent, her manly attitude, street smarts and independence.  Artist Marcelo Henrique Santana tastefully depicts her famous profile without exaggerating her assets; instead focusing on her strength, bravery, and defiance by the way he illustrates her powerful movements. She doesn’t look frail or weak, and not excessively curvy.  It’s a nice interpretation that fits the mood of the storyline.

The conflict/threat at the center of the book occurs during World War II, where Russians discover a suit of armor and the subject of abnormal experiments in a hidden bunker.   Flash forward ten years to 1955, where Bettie Page awaits her appearance before the Kefauver committee hearing.  She’s abducted and taken away from the hearings to a hideaway where her captors bind her and attempt to frighten her.  It’s only later that they reveal they are government employees and reveal their true purpose.  It seems typical of the times.  Woman weren’t necessarily considered equal in status in the 1950’s.  While there were women in the workforce, a woman’s role was still considered to be driven by the desire to be a homemaker and mother.  In current circumstances, Page would have simply been asked to help the government instead of being kidnapped, forcibly held against her will, and coerced into assisting.

Once she becomes aware of the true nature of the threat, Bettie is wiling to train and prepare for the mission.  The Russian general who discovered the experimental lab, has been rejected for continued service due to his proclivity for female enslavement. He still possesses the armor and superhuman he discovered and has his own plans for world domination.  He’s anxious to meet Bettie Page  (probably due to her bondage films) and the government sees this as an oppotunity.  An advocate of women’s rights, Page is glad to help once she learns of the general’s bad habits.

STORY: It’s a good beginning to the first story arc, which would seem to promise a faster-paced middle section now that the background has been covered in the first issue.  A mix of history, war story, science fiction, and fantasy — there’s a lot of elements to make for an interesting book.  2 POINTS.

COVER:  Creates curiosity through the colorful image of a seemingly helpless and innocent beautiful woman against the stark black and white backdrop of WWII scenes and fantastic elements.  1.5 POINTS

RECOMMEND?  A little too early to tell, since we’d like to see how Frizell handles the rest of the story once it starts to engage more rapidly. But it’s worth a look.  ONE-HALF POINT.

TOTAL RATING: 7 POINTS.  It’s different enough for readers to make their own judgments. It could be a story that you would like.