New Comic Wednesday: The RENEGADES are back 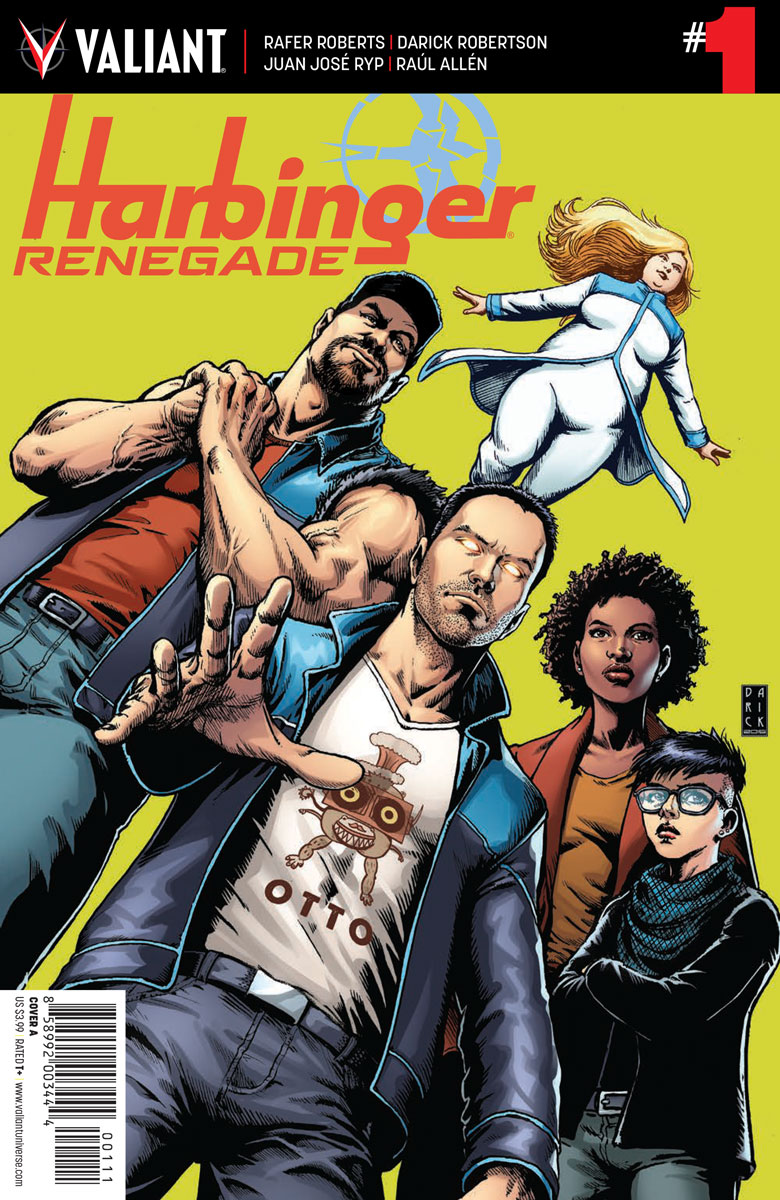 Following the first year of the return of Valiant to comics publishing, we named HARBINGER the best re-boot series of 2012.  After the first story arc completed, we summarized it with these words: “HARBINGER started out amazing and just got better with every issue.”

In subsequent reviews we referred to it as our favorite Valiant book, a high compliment considering that X-O MANOWAR was their flagship title and also a premium quality book. The date that HARBINGER Volume 2 ended after 25 issues was a sad day at the BC offices.

Here we are four years later, and the Renegades team is getting back together. We were happy when the news was released, but also worried about the creative team.  We could not imagine any other writer re-capturing the magic of Joshua Dysart’s original storyline.

HARBINGER RENEGADES #1 is amazing, and we fully expect it to get better with every issue.

What made the last HARBINGER series so special? It dealt with humans with enhanced mental abilities, known as “psiots”, and was an adventurous exploration of all aspects of those enhanced mental abilities and the way the characters utilized them: telekinesis, levitation, spatial atomic distortion, electro-psychokinesis, projection, etc.  Doesn’t that sound like another version of the X-Men? Yes, but there are differences.  For one, the psiots are born with their abilities, but it requires a special process to make them manifest. That process is not without risk and is often fatal. Doesn't that sound like the story of The Inhumans and the Terrigen Mists? Yes again, but there are still differences. Theses aspects served mainly to move the story forward.

Let’s recognize that every reader brings something different to the table.  This is our personal takeaway: what HARBINGER became for us was a study of extreme power and how people react and respond to it differently.

The two most prominent characters in HARBINGER were both psionic.   Toyo Harada was a wealthy “humanitarian” with a twisted moral center.  Peter Stanchek was a fugitive with a mental disorder.  The two most powerful psiots were at opposite ends of the universal spectrum like Order and Chaos, or Ying and Yang.  Over many issues, the storyline would contrast and compare how they handled similar situations, all the way back to a key moment when they each reached 18 years of age. One example of the contrast is Harada boldly meeting the challenges of his extreme power head-on, while Stanchek sought to muffle or conceal the voices in his head by using pharmaceuticals to keep himself in a constant stupor.

Can we ignore the dangerous aspects of Harada’s core personality if he accomplishes the “good” for the world that he envisions?  What might happen if a mentally disturbed person possessed super-human abilities?  These two driving questions kept us reading issue after issue.

Writer Dysart had the ability to make these fantastic situations seem realistic, as if they might be happening to the reader.  Throughout his story, the fates of Harada and Stanchek would intertwine and depend on each other (but not equally).

The expanded three-page prologue in HARBINGER RENEGADES #1, with fabulous two-toned interpretations of events by the Allen and Martin art team, does a concise job of summary.  It explains the existence of psiots, how they are activated, the roles of Toyo Harada and The Harbinger Foundation, and how Peter Stanchek and The Renegades broke the Foundation, revealing their secrets to the public. Following the success of their mission and the loss of a key member, the Renegades broke up with only Faith Herbert as Zephyr still working to protect and prevent harm to psiots.

Following the introduction is a fast-paced prologue that gives readers a sit-rep on Harada and his organization.  H 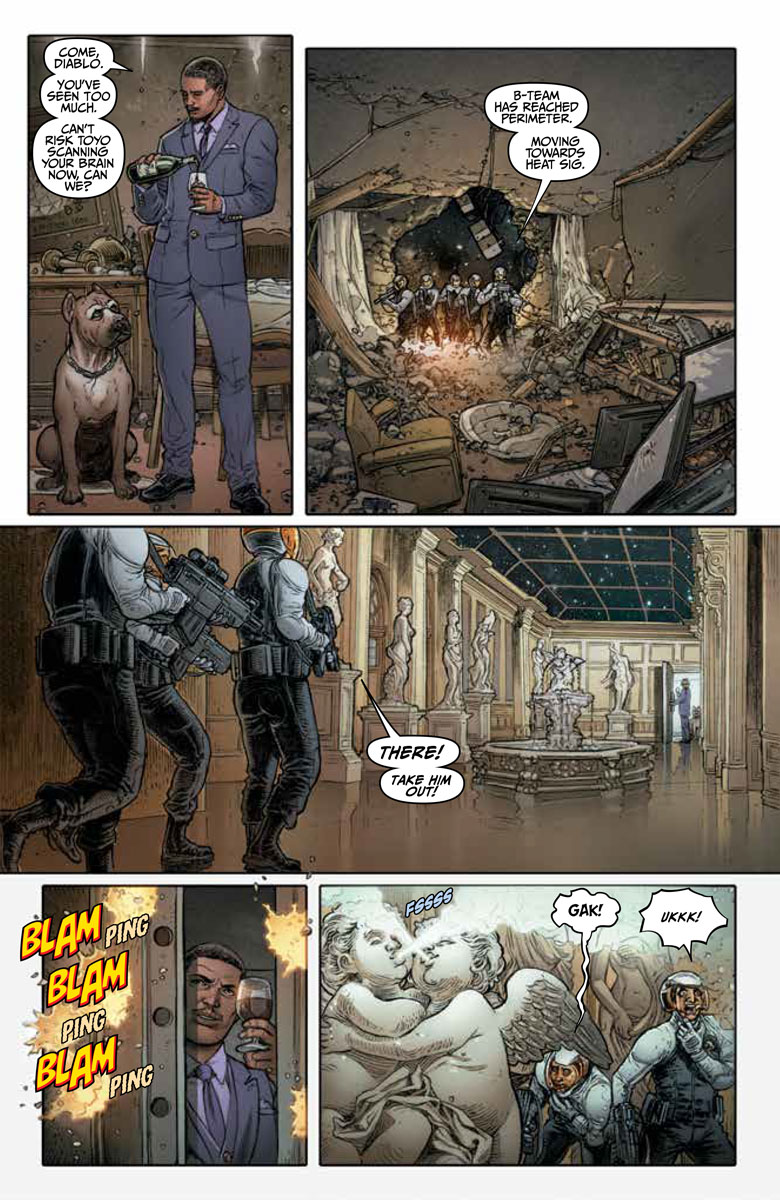 e’s still trying to secure more psiots to join his ranks, and attempts to secure an elusive psiot hiding in Spain.  An intriguing new character is introduced, Solomon and his dog companion Diablo, who may play a key role in the future proceedings.  We learn how willing Harada is to sacrifice resources in pursuit of his ambitions.

We’ve only been exposed to the writings of scripter Rafer Roberts on the ARCHER & ARMSTRONG title, and he’s shown that he’s capable of getting to the core of Faith and showing us through her interactions with Archer what a deep and different character she can be. The Roberts version of ARCHER & ARMSTRONG (see our recent review this month) has been growing on us, but we had a concern that he might bring that same light-hearted touch to HARBINGER RENEGADES (and that would take away from its significance).

Fear not.  This book looks to be as different from ARCHER & ARMSTRONG as it has the potential to be. Roberts takes a different approach here and is not afraid to show the dire consequences of power in the wrong hands.  He also seems to understand the complexities of various Renegade team members and portrays them with all their anxieties and fears, warts and all.

Following the brutal consequences of the prologue, Rafer follows up by punching us in the face again.  As a result of Renegade member @x hacking Harbinger Foundation files and making them public, all the names of psiots that Harada was tracking are revealed.  That makes it possible for the NSA and other agencies of dire purpose to try and apprehend them. Even worse, the recipe for activating psiots and the technology required are also made public.  Roberts and artist Darrick Robertson vividly depict the potentially destructive results when amateur groups, like the Consortium and their hothead psiot leader Enfuego, try to take short-cuts while activating new psiots.

Feeling that the Renegades bear the burden of responsibility for these consequences of public access, @x recruit 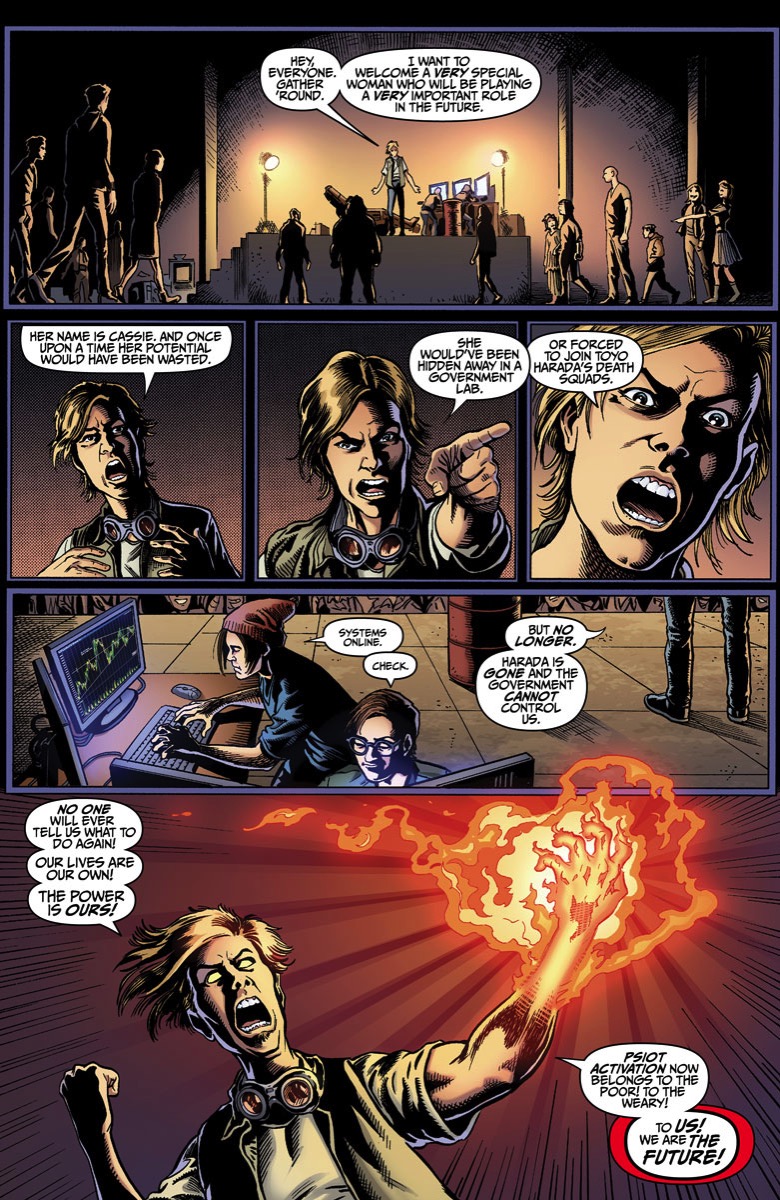 s Faith in his efforts to assist new psiots.  Realizing that the job is bigger than he can handle he contacts former members and asks for help, specifically Torque and Kris.  As might be expected, both are reluctant to join in.

Faith meets a new psiot, Jay Tucker, who abilities have yet to be activated, and they both try to persuade Kris to help.  They need her to tap her mental connection with Peter to find out where he is and call him back.  He’s either in a spaced-out frame of mind, or actually somewhere in the cosmos drifting in a mystical moment of zen.

With Darick Robertson on board for the art, we’re in for a great ride.  He is marvelous at depicting the intricacies of various facial expresssions, and the body language of Enfuego with his respectful smirk seem to indicate that he knows something the reader doesn’t. Robertson’s depiction of Stanchek close out the issue, and provide the icing on the cake. I would love to see what he would come up with if assigned to illustrate some Doctor Strange stories!

ART:  The images that illustrate the text of the introduction are perfect.  Ryp does a stellar job on the prologue. Getting the incredible creative talent of Robertson to illustrate the rest of the book is like placing a giant scoop of ice cream on top of our favorite cake.  3 POINTS. 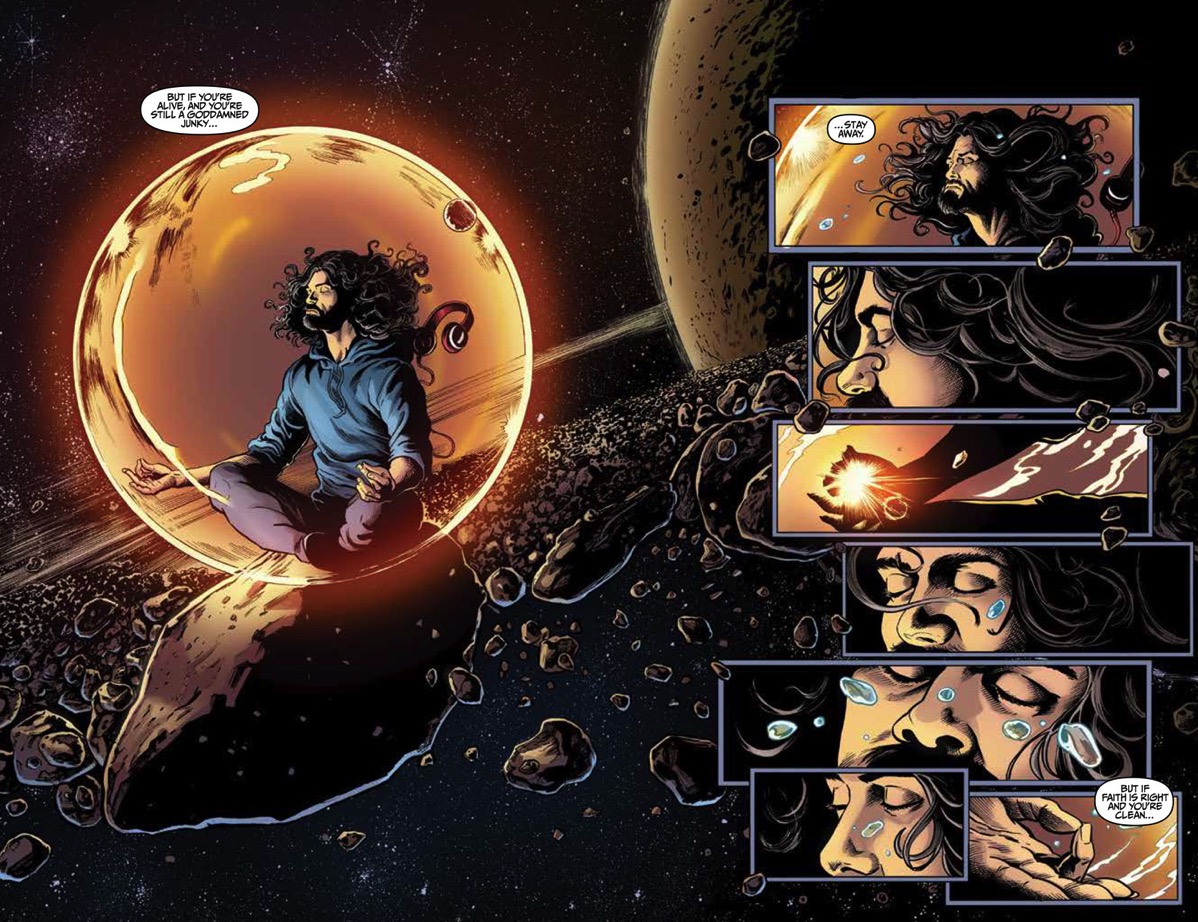 COVER: We try to put the emphasis on the main cover when rating, as some readers may never get a chance to see all the variants. Multiple covers?  When you have artists of the caliber of Darick Robertson, Richard Clark & Diego Rodriquez, Jelena Kevic-Djurdevic, Dave Johnson, Kano, Pere Perez & Andrew Dalhouse, Clayton Henry & Ulises Arreola, Bob Layton & David Baron, and Jim Mahfood involved it’s hard not to include that in our evaluation. 2 POINTS.

READ AGAIN?  Yes. The first issue ended before we were ready for it to stop.  We’ll need to read it again just to remember everything, slowly and deliciously.  1 POINT.

RECOMMEND?  Yes.  Our fears have been vanquished. Our expectations have been met. 1 POINT.

TOTAL RATING: 10 POINTS out of 10.  A classic. If you only buy one book this Wednesday, it should be this one.

NOTE: This marks the first instance since we began using the BC Rating System that a book has been rated a perfect 10.  What’s next?  Possibly 11 points.  We reserve the elusive 11th point for those select few titles that we consider KEEPERS,  those series or issues in the short box of books you would take to a desert island if you were limited in numbers.  HARBINGER Volume 1 is in that box.  Time will tell if HARBINGER RENEGADES will join it.