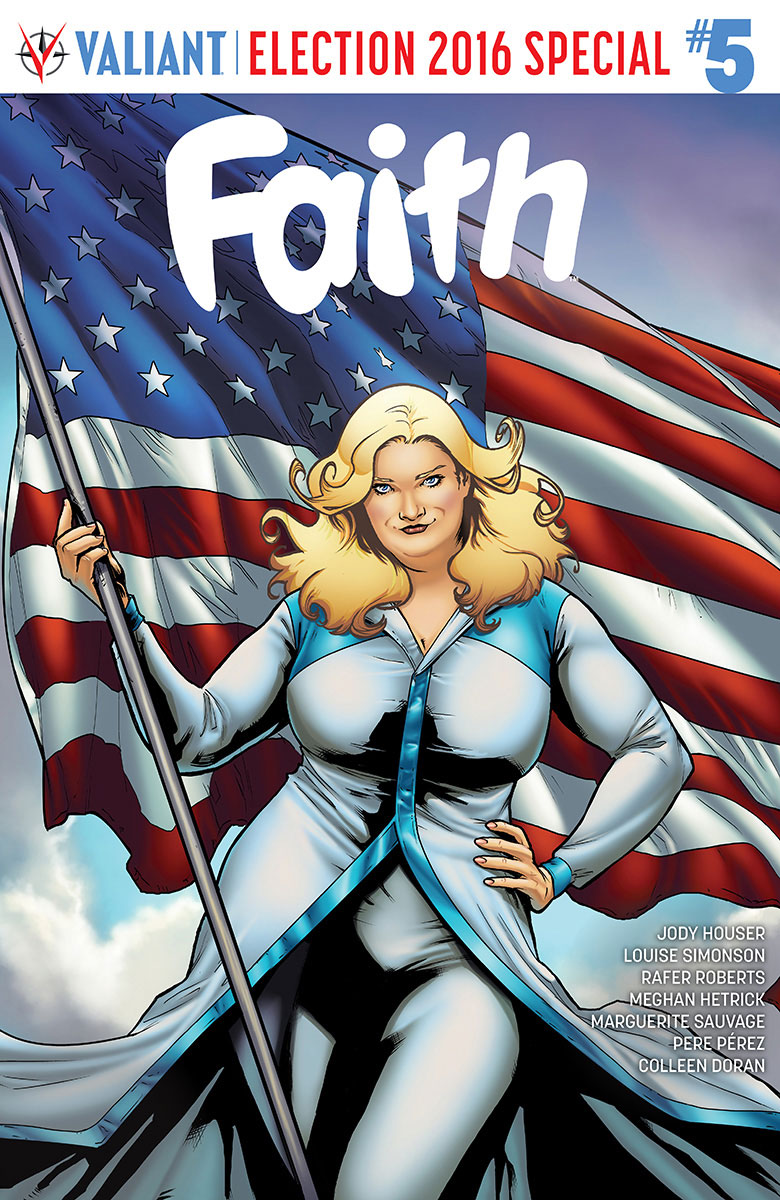 EDITOR’S NOTE:  This 48-page special issues contains three separate stories, which we will review one at a time. Our final ratings are based on the overall issue considered as a full package. We also opted to showcase some of the variant covers rather than reprint the now familiar standard cover. See other earlier articles on our site to view that one.

The issue starts off with a 20 page beginning of an interesting new story arc by Jody Houser.  It follow the events im 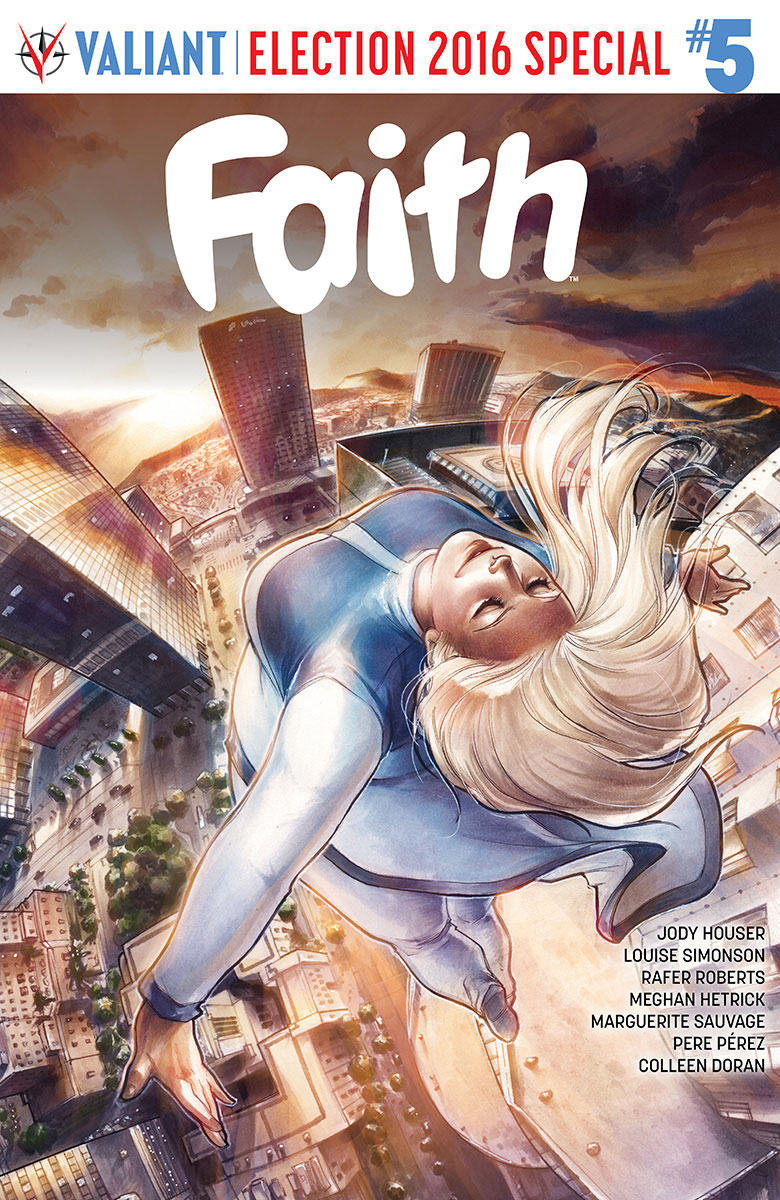 mediately following the comic con adventure where Faith and Archer were confronted by Murder Mouse, a criminal cosplayer.  Faith seems to be having a small crisis of faith, where she loses a bit of her endearing optimism after some disappointments and surprises related to those events.

The high points of the issue are the action sequences as well as the interludes with Faith at her day job.  The supporting characters are engaging and there are some good reveals during the conversations they have with each other.

Zoe Hines, a young Hollywood starlet recently discredited, is feeling isolated and ostracized while sitting in the waiting room of a casting studio.  After enduring enough gossip and innuendos about her from the other aspiring actors she flees the room and meets a talking cat who offers her redemption via retribution.

Suddenly, she’s a missing person and this catches the notice of Faith who decides to investigate.  She finds that Project Rising Spirit is involved and uses her telekinesis to try and delay them.  This leads to a shopping mall where Faith has a meeting with both Zoe and the talking cat and finds herself in trouble.

The art by Meghan Hetrick is concise and clear, but suffers from a  lack of detail on individual facial features.  Granted, there are some small panels as well as crowd scenes that make it difficult for an artist to be very specific, but lines and dots as substitutes for facial features detract from the art and the story.  The best art in this story are the pages of fantasy sequences illustrated by Marguerite Savage.

This was the story (as well as the special covers featuring Hilary Clinton) that resulted in this single issue selling out at the distributor level.  We’re not sure what all the uproar among some comic stores is about, as the story is tastefully done and stops short of making any endorsement of the presidential candidate. No outlet should be concerned about displaying this on their shelves.  I’m sure there are a good amount of people who want to buy it.

Comics veteran Lousie Simonson writes a crisp, fast-paced 10 page story that focuses more on Faith and her feelings than it does on Clinton. There’s also a brief appearance by Livewire and X-O Manowar.  The art is a big im 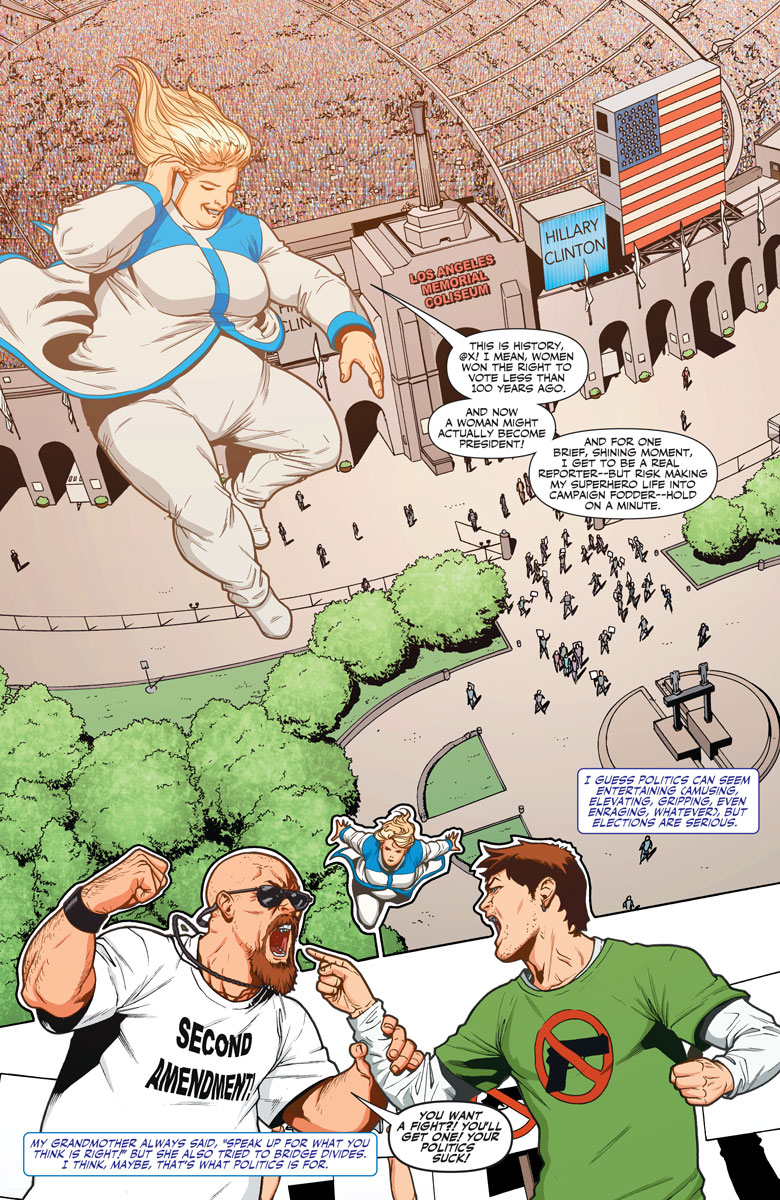 provement over the hurried look of the first story.  Perez has a more dynamic style and the inks have a crisper look.

Zipline wants Faith to cover Hilary Clinton’s address at Los Angeles Memorial Coliseum not in her role as reporter Summer Smith, but as Faith writing on her blog from the perspective of a female psiot hero.  As Faith arrives at the stadium she gets news of a burglary close by.  A gang of thieves led by a male psiot with wind powers is using the event as a distraction.  Before Faith can stop them, an accident occurs that imperils the stadium crowd.

Faith helps prevent some serious injuries, and gets a face to face meeting with Hilary Clinton, where two women of great power have a conversation about responsibility and helping the world and making a good effort.  Their meeting ends in a selfie opportunity, truly in character for Faith except that someone else requested it.

Rather than come out as an outright endorsement of Clinton, Faith focuses throughout the story on the historic significance of a woman running for president and the importance of the voting process.

It’s not easy to get much of a story with just six pages to work with, but Roberts does a commendable job.  While breaking up a gang of high tech gun runners Faith finds a young girl in hiding.  It turns out she is the niece of one of the gang members who intended to use her developing psiot mental powers for crime.  She looks up to Faith as a role model, and a heart-warming conversation between the two occurs before Faith reunites her with the parents.

True to form, Faith manages to get some funny pop culture references in while fighting the bad guys.

The art is competent and expressive, except for some of the smaller panels where facial details are too simplistic. That’s one of the few peeves with this particular issue - - perhaps some art had to be rushed to meet deadlines. 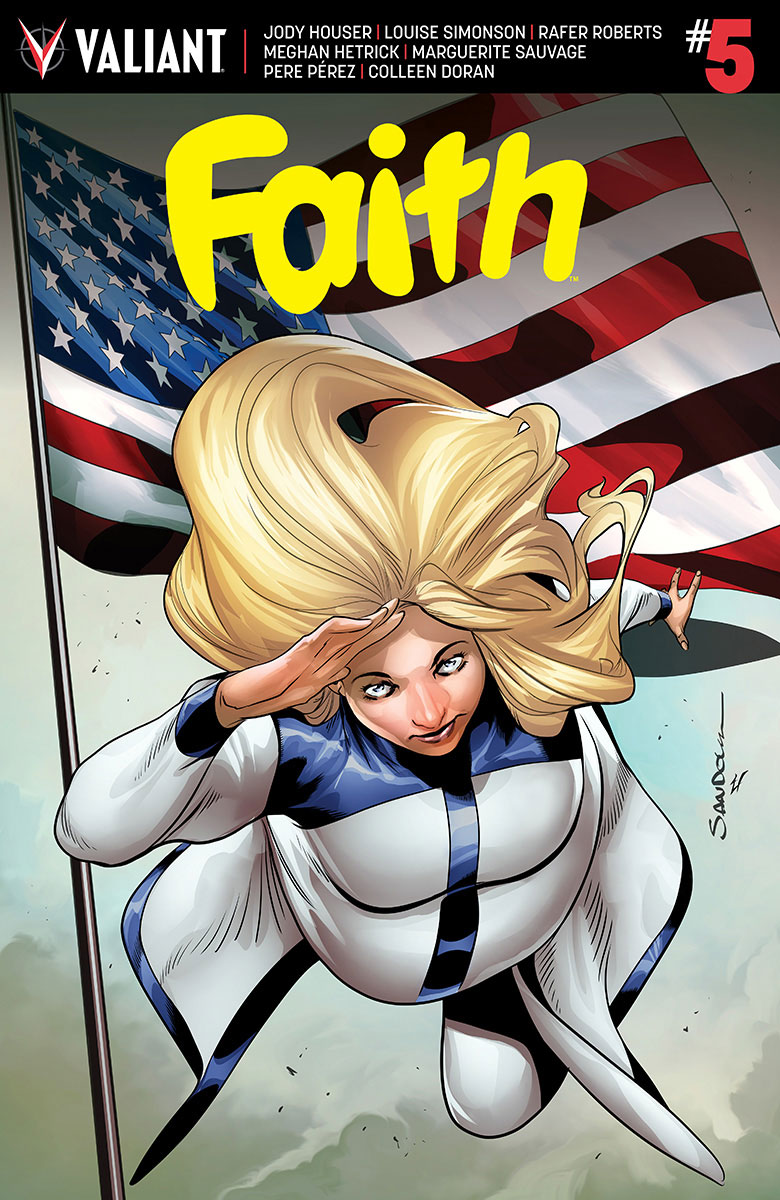 In this particular story, Faith has been on patrol for 18 straight hours and is getting fatigued.  Twice during the story she wishes for assistance, which may serve as a prelude to the upcoming HARBINGER RENEGADES series.  (Glad to see they’re bringing some of the old team back.)

Coincidentally, this issue also features a four-page preview of the upcoming HARBINGER RENEGADES series debuting in November, and wraps up with a text and photos article about Valiant at the recent New York Comic Con.

STORY:  More than you might expect gets accomplished in all three tales, despite the short lengths.  The new story arc is interesting, and both the back-up stories by Simonson and Roberts are great examples of telling a memorable story in a tight page limit.  2 points.

ART: Two out of three isn’t bad.  However, considering the great art that Valiant is becoming known for, we feel this issue falls short of those now expected standards.   1.5 points.

COVER: All the covers are well-done, and do a good job of indicating this is the election special issue.  They should certainly create curiosity.  1.5 points.

RECOMMEND: Yes.  This issue is certain to become a collector’s item.  Also, all three stories showcase the heart and soul of Faith, which is her compassionate character and bubbling optimism. However, if a reader wanted to really get into the character, we would recommend the first limited series (now in trade paperback) over this single issue.  0.5 points.

TOTAL RATING:  Six points.  A good read, but not a must-have, unless you are collecting it because of the special appearance. 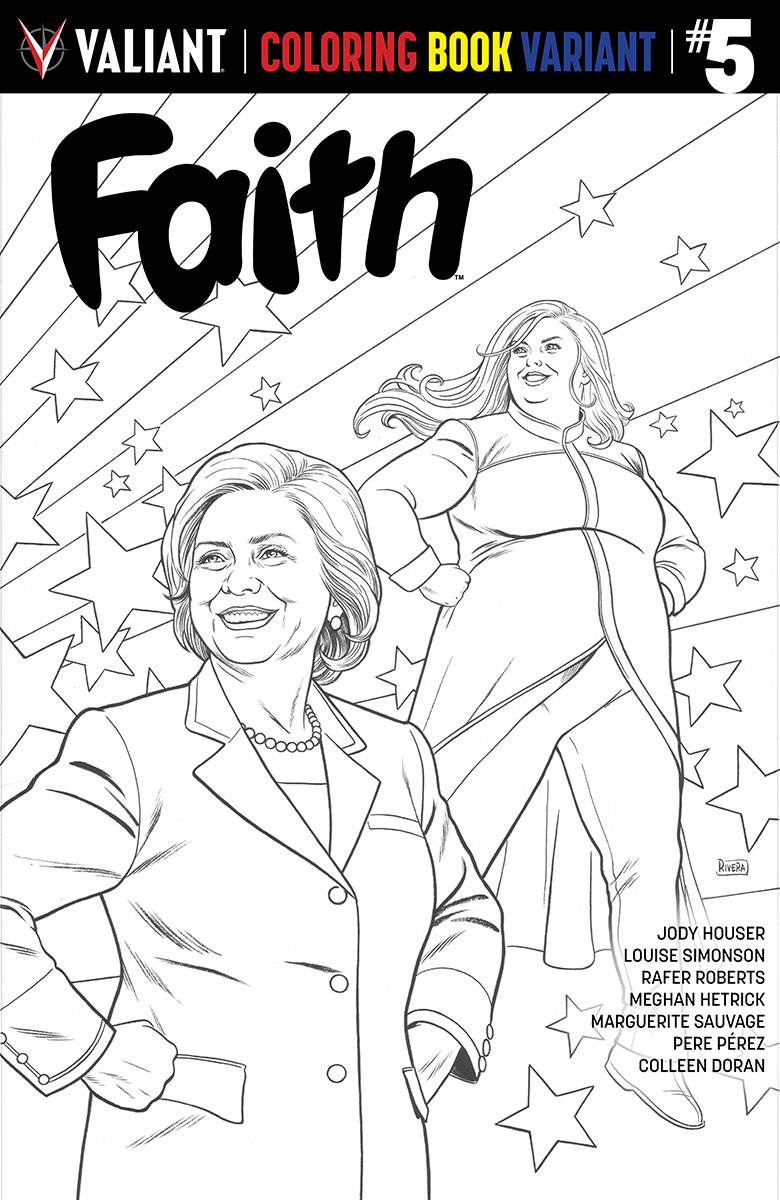