EDITOR’S NOTE:  We continue our spotlight on WEIRD DETECTIVE, our nomination for the Best Mini-Series of 2016.  It should also be in consideration for recognition in the horror genre, including the Ghastly Award and the Rondo Hatton Award.  We plan to review each issue, and hope to draw more attention to this deserving creative work of imagination.  P.S. . .  There are some incidental spoilers in our review, so tread cautiously. If you’ve come this far, why not pick up the whole series?  The trade paperback is scheduled to be released February 08,2017 and was featured in the October PREVIEWS catalog. Contact your local comic shop and order Diamond #OCT160070. You won’t regret it.  Not to be missed.

True to the promise of the credits page update on what happened so far, ‘things are about to plunge into new levels of weird’ indeed. 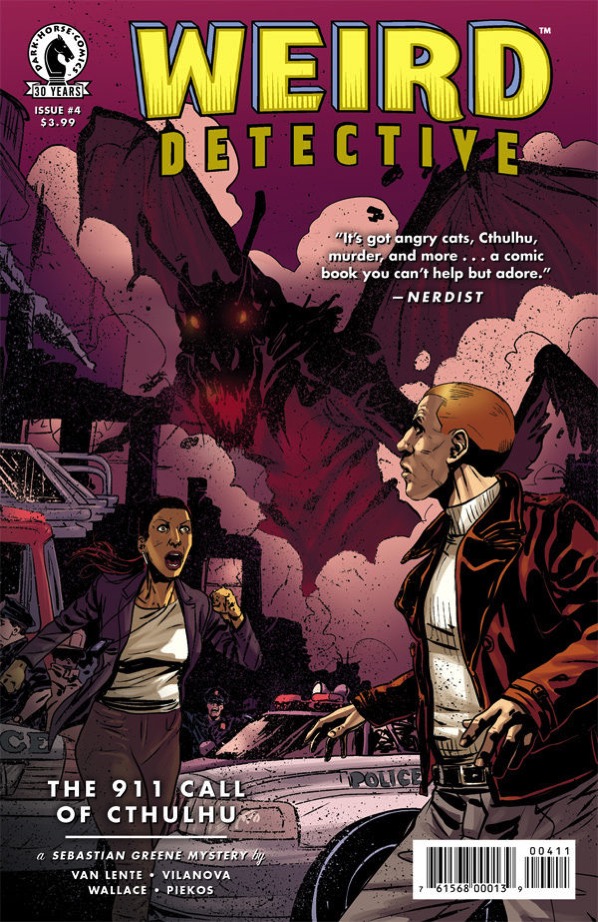 The pop culture references continue, as we’ve come to expect and anticipate (and  gladly). One of the FBI agents in private conference with Detective Fayez is named Clarice, and the other resembles a certain Agent Coulson. In addition to Fayez reporting on Greene, things could get even hotter for him when an interested mysterious third party learns of his involvement.

The alien Greene has learned how to become a true detective (apparently from all the old Humphrey Bogart films and Dragnet, Law And Order, and other police television dramas), and returns to the site of one of their street surveys and a critical finding. After all, where would a Lovecraft themed story be without some enormous tentacles involved? 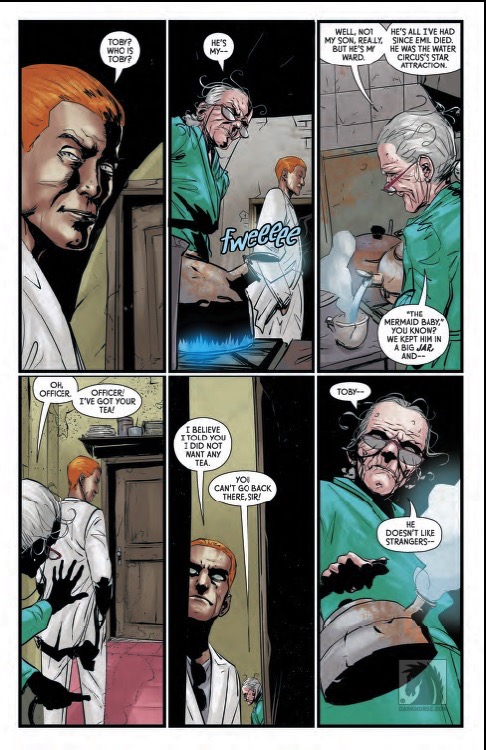 Greene doesn’t really fix things, just puts a temporary bandaid on it.  And a new problem has arisen, brought to his attention by Fayez’s same sex wife — Sana hasn’t been home for three days.

Greene ignores his directive and does what Bogart taught him to do — he goes looking for her, because ‘she’s my partner, and I happen to be in the detective business.’

While not as sharp as other entries in this series, Issue #4 is still worthwhile and a great read.  Van Lente needs to begin wrapping up all the various plots threads and begins to do so in this issue.What suffers a bit as a result are the amusing jokes and funny incidents that are peppered throughout this mini-series.  The art, while still great to behold, seems rushed a little here compared to other issues.  Some of the facial details are not defined to the extent that we’ve come to expect.

We're looking forward to an action-packed and satisfying ending in Issue #5.  We’re also wondering if Van Lente will be able to work the other remaining senses into the story. By our count, we’ve only seen  6 of the 17 senses that the alien Greene bragged about.  Unless, aliens of his world have a tendency to exaggerate?  Huh!