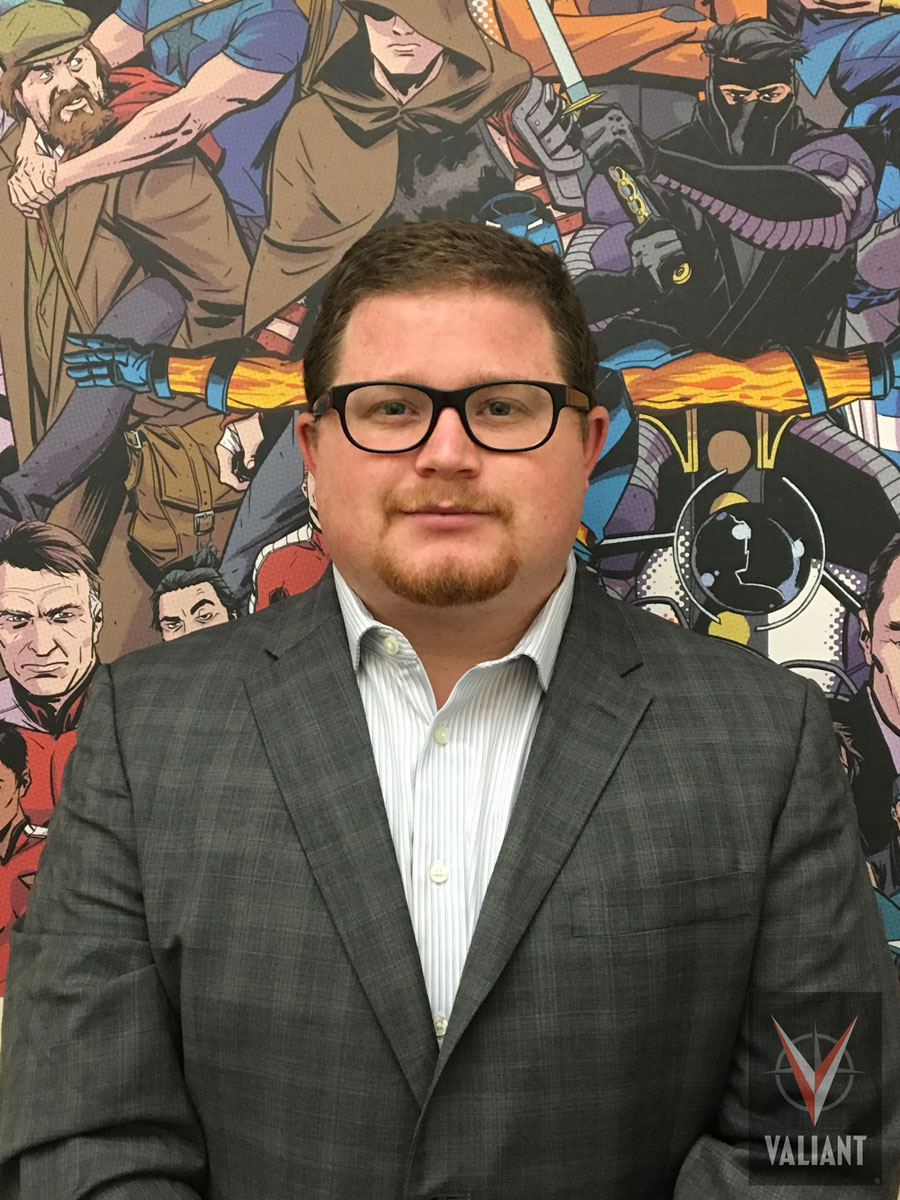 Valiant today named Josh Johns to the position of Director of Digital Media and Development. A key member of the company through multiple departments since Valiant’s relaunch in 2012, Johns joined the company as Assistant Editor in 2011 before being tapped to spearhead Valiant's digital media development and subsequently being promoted to his previous position as Associate Director of Digital Media and Development in 2015.

Johns’ new title reflects his contributions to Valiant’s growth and expansion, which most recently culminated in the creation of VALIANT DIGITAL – a new division of Valiant Entertainment committed to producing scripted original content in live action, animation, and emerging media, created specifically for the digital arena. The first project from  will be NINJAK VS. THE VALIANT UNIVERSE – a brutal, first-of-its-kind, live-action digital series set to debut in late 2017. As Johns continues to extend Valiant’s reach across social and digital media, VALIANT DIGITAL is the next strategic evolution of Valiant’s long-term plan to expand the ranks of its already sizable fanbase around the world.

“With new projects and opportunities emerging in the realms of film, television, gaming, and licensing, Valiant is pioneering as a multimedia entertainment company,” said Valiant Chief Operating Officer Gavin Cuneo. “As future digital projects bring Valiant’s award-winning superheroes to new platforms and audiences, Josh will play an important leadership role in their development.”

Following his success on Valiant’s editorial team, Johns was tapped with spearheading Valiant’s social and digital media development. Since the transition, Johns developed Valiant’s social media presence into one of the most robust and interactive out of any independent comics publisher, assisted in the creation of VALIANT DIGITAL, and developed strategic partnerships with companies including Twitter, Twitch, Bat in the Sun Productions, and more.

Originally founded in 1989, Valiant Entertainment is one of the most successful publishers in the history of the comic book medium with more than 80 million units sold and the third largest library of superhero characters in comics. In 2012, Valiant roared back to the fore with four new titles released under the banner of "The Summer of Valiant" – a relaunch that quickly established itself as the biggest debut of a new comic book publisher in more than a decade. Beginning with X-O MANOWAR #1 by New York Times best-selling writer Robert Venditti and Eisner Award-winning artist Cary Nord, which ranked as the year’s best-selling new series from any independent publisher, Valiant has consistently produced some of the highest selling and most critically accoladed comic titles anywhere in the industry. During the same period, the resurgent Valiant was also awarded a coveted Diamond Gem Award for Publisher of the Year after just seven months of publishing, marking the fastest time that any new publisher had been named to one of comics' highest honors.

After successfully revitalizing the largest independent superhero universe in comics, Valiant expanded its publishing roster with a successful slate of new titles, characters, and concepts, beginning with 2013's UNITY #1 by New York Times best-selling writer Matt Kindt and superstar artist Doug Braithwaite – an issue that was recognized as the biggest independent comics launch in more than five years. Also in 2013, Valiant released HARBINGER WARS #1 – the beginning of Valiant's first inter-title crossover event, which in turn inspired a five-film plan for Valiant's BLOODSHOT and HARBINGERfranchises as feature films at Sony Pictures.

“Valiant is on the cutting edge of what a comics publisher can do in digital media. For several years, Josh’s ambition and innovative eye have exposed the company to an entirely new audiences, while still keeping us closer than ever to our dedicated fanbase,” said Valiant CEO & Chief Creative Officer Dinesh Shamdasani. “In his new role, Josh’s passion and dedication will continue to open up new opportunities, projects, and partnerships dedicated to creating new fans and readers of Valiant.”

Johns’ experience prior to Valiant includes Marvel Entertainment and Gaijin Studios. He holds a B.A. from the University of Georgia.