Timonium, MD— ComicWow has gathered a team of comic readers and tabletop gamers for a 24-hour live stream to benefit the Crohn’s & Colitis Foundation of America (http://www.ccfa.org). The live stream will take place at the ComicWow studios from 6pm EST on Friday, November 11th to 6pm EST on Saturday, November 12th. 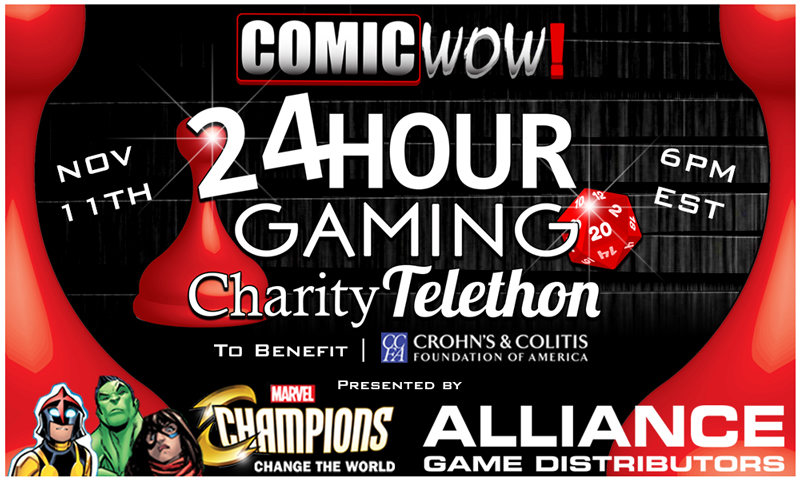 ComicWow President Josh Geppi stated that he is “so thankful for all of [ComicWow’s] sponsors. It was great to get so many, especially title sponsors, Marvel’s Champions and Alliance Game Distributors.” There is no shortage of prizes for viewers, Twitch subscribers, and donators alike.

IDW is split into both IDW Publishing (https://www.idwpublishing.com) and IDW Games (http://idwgames.com). They have sent six games for the stream as well as prizes to give away throughout all 24 hours of the stream. Paizo (http://paizo.com), leading publisher of fantasy RPGs, is giving viewers books, guides, and accessories for donators. Boom! Studios (http://www.boom-studios.com), publisher, has provided books of all kinds, including Lumberjanes and a book filled with artist renditions of the classic, Peanuts. Death Wish Coffee (http://www.deathwishcoffee.com) has sent a bunch of goodies to be added to the prize packages.

Games that will be played live include, but are not limited to, Superfight, Hive Mind, Codename Pictures, Red Flags, Times Up!, and Clank!. Geppi states that the stream is all gaming to adhere to “the audience that we could reach all at once... [There is a] closeness of the comics and gaming communities; I believe we can reach a lot of people there.”

The point of this stream is to raise both awareness and money for the CCFA. In doing so, ComicWow will be giving away a prize package every eight hours with a retail value of up to or over $2,000 each. Every $20 donated will get a viewer one entry, $100 will get seven entries, and winners are chosen at random via computer software. Other prizes will also be given away throughout the day...and night, so make sure to donate whenever you can through ComicWow’s donation page, www.comicwowcares.com.

This stream will feature your friends at ComicWow, cosplayers that you’ve seen on Cosplay Poker and Epic Quests RPG, as well as tons of volunteers that have been kind enough to give their time to charity. It’s going to be “a lot of good people coming together for a great cause, and chances to win items from your favorite sponsors,” says Geppi. “Hilarity will ensue.”

For more information on ComicWow and the 24-hour live stream, visit http://comicwow.tv.  Be sure to follow ComicWow on its social networking sites to stay up to date on all new developments: