EDITOR’S NOTE:  Since we have devoted some blog space to reviewing a comic featuring Hilary Clinton, it seems reasonable that we also give some review consideration to a comic featuring Donald Trump. We admire the courage of Stormfront Publishing (formerly Bluewater Productions) and their commitment to publishing topical nonfiction comics featuring biographies and profiles of contemporary and often controversial figures in politics, entertainment and music. Realizing that comics are an important pathway for many young readers to reading and discovery of history and current events, sometimes the only pathway, we applaud any comics publisher that spends some effort in trying to accomplish that.  We also doubt that publisher Darren Davis will be voting for Trump, so we respect his altruistic approach.  We’ve tried to be objective in our review of this particular comic, but have to confess that it’s one of the hardest reviews we’ve attempted to write.  We stand with comedian Louis C.K. in his blunt summary of the current election:  “If you vote for Clinton, you’re a grownup.  If you vote for Trump, you’re a sucker.  If you don’t vote, you’re an asshole.” 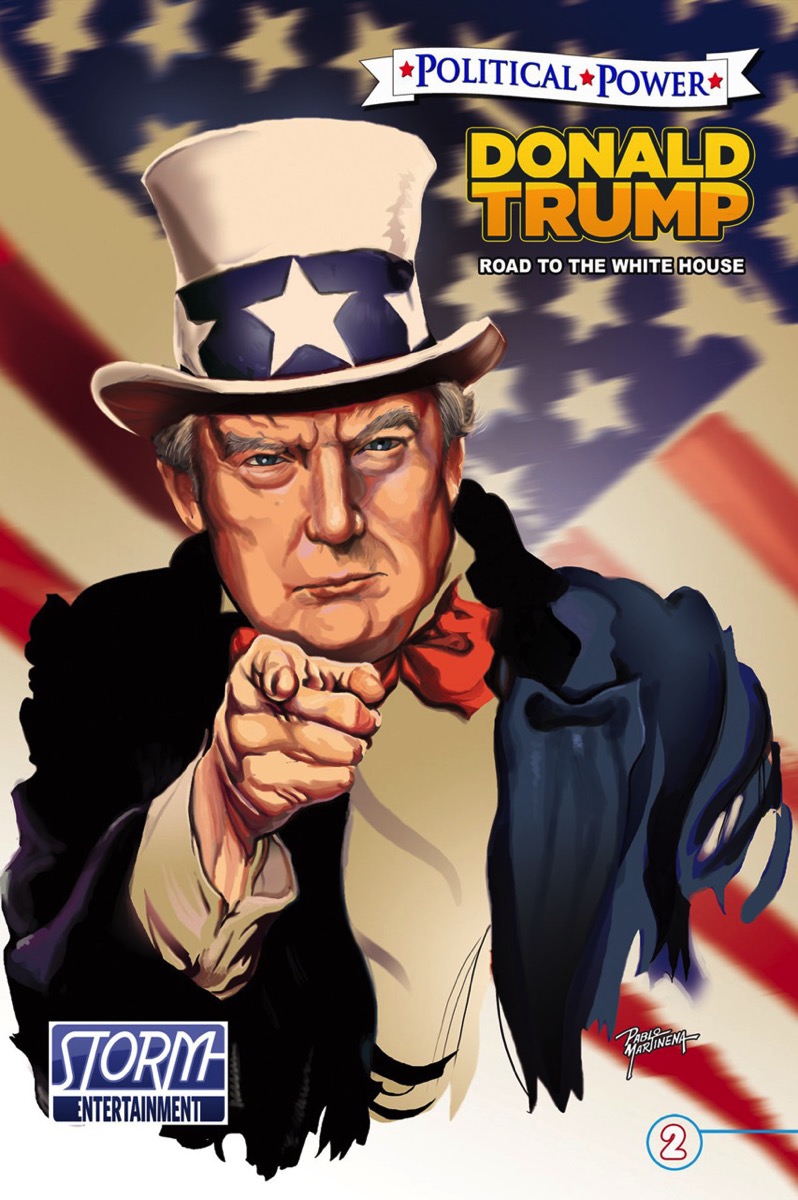 The second issue in the POLITICAL POWER series devoted to Republican Presidential candidate Donald Trump focuses on the period of time between June 2015, when he announced his intention to run for office, through the initial primary campaign and other events of 2016, ending around the time of the Billy Bush “locker room talk” revelations.

Rather than a factual and potentially boring retelling of the news and events, POLITICAL POWER : DONALD TRUMP #2 shows us the observation of all of these through the eyes of a citizen most likely to be favorable to voting for Trump.

This unidentified white middle-age male lives in a single ranch home located in a middle class neighborhood somewhere near Kansas City. We immediately learn that he’s married with a teenage son, and having some compatibility difficulties with both, and happens to be a news junkie.  From the time he rises for work at 6 a.m. and throughout the day he is glued to the news - - morning radio, Rush Limbaugh broadcast on the drive to work and back, the internet news at work, and CNN and FOX news at home.

The bumper sticker on his car endorses Ben Carson for President, which he later changes to a sticker for Trump after he becomes the main Republican candidate.  His long-haired neighbor begins with a huge Bernie Sanders sign in the yard and later changes it to Hilary Clinton.  This occurs at the same moment that our middle-aged observer is replacing his bumper sticker to Trump.  The neighbor waves the peace sign.  The observer flashes him the finger, by this point already becoming frustrated by the turn of events. For every bullet point in Trump’s campaign, there is a contrasting negative reveal of his true character.  Trump denies all of it, but the cameras don’t lie.

Most of the observer’s feelings are not vocally expressed in the dialogue or captions, but indicated in the situations that happen to him, as well as his reactions through his body language.  The main character in this story never speaks, he just observes, reacts, and endures. Frustration turns to bitterness, then turns to disgust. He’s been passed over for a promotion to a special project manager in his job, apparently administrative staff at a Home Depot.  His project boss, a younger minority female, makes his job more difficult than before with some new rules.  The news he eagerly ingests daily just increases his anxiety and apprehension.

Everything culminates when he attends an aborted Trump rally on May 12, 2016 at the Midland Theatre in Kansas City.  His place of observation for Trump’s speech is right beside an organized protest movement.  When police move in to break things up, the observer is maced in the face with a spray can of tear gas.  An anti-Trump protester comes to his aide and helps him to relieve the pain and damage to his eyes.

From that point, his situation at home improves and all family members watch the television news together.  Peace in the valley.  He later attends a Kansas City Chief pep rally at a sports bar with his work buddies.  When the television changes to news of the Billy Bush revelation, a co-worker turns it off.  The observer then gazes off-panel directly at the reader, with one finger raised and a questioning eyebrow, as if to state “think about it.”

While the recent issue of FAITH stopped short of an actual endorsement for Hilary Clinton, this POLITICAL POWER issue could hardly be construed as an endorsement for Donald Trump, in spite of the book title and subject matter.

STORY:  We like the method used by scripter Frizell to tell the story, from a third-person observation and viewpoint, even though the main character never utters a word. This is delicate subject matter, and the approach is as objective as should be expected.  2 points.

ART:  There’s nothing flashy about the art style, although the subject rarely lends itself to action scenes.  That would just seem exploitive, which this is not.  However, the use of body language and facial expressions is the only way a reader can judge how the main character is reacting to the news, and artist Webb does a fine job of conveying that. 2 points.

COVER:  The cover does have eye appeal and certainly reflects the contents. It doesn’t create curiosity because the subject matter is already known.  However, the cover image could make readers curious as to how the story will be told.  1.5 points.

READ AGAIN?  This is one of those books where one reading tells you everything you need to know.  There is no benefit to a second read.  Zero points.

RECOMMEND? While we appreciate comic books covering biographical topics, we cannot recommend this title.  Trump is a polarizing influence on American politics, exhibits boorish behavior, and is a poor role model for young people. Zero points.

TOTAL RANKING: 5.5 points.  Worth reading if the subject matter and contents have interest to you.