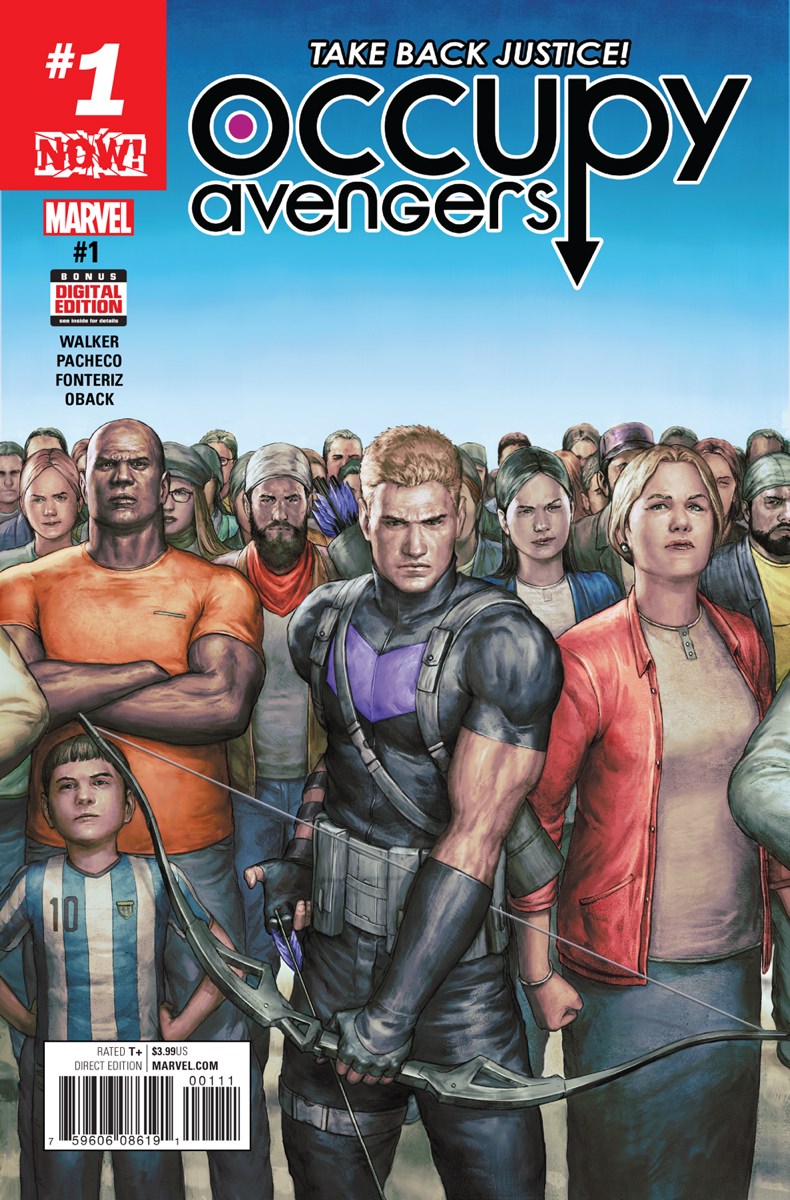 Sometimes simpler is better.  The story in OCCUPY AVENGERS is much easier to follow compared to the other new Avengers title that debuted last week.Easier to follow, and equally if not more interesting.  We are not sure yet of the significance of the title, but it may refer to this Avengers book concerning itself with challenges and problems that cause trouble for the common man on a smaller scale, but just as important as the nation-wide or planet-wide conflicts of other Avengers books.  The cover image of a crowd blockade with Hawkeye in the foreground and the words “take back justice” above the title bring to mind the Occupy Wall Street and similar movements of modern times.

Hawkeye is for once the main character in the book, and the spotlight is definitely on him.  He does work with another character during this issue’s troubles, but it remains to be seen if a partnership is developing after this first story arc concludes.

We haven’t been following CIVIL WAR II or other recents events in the Marvel books. Despite the Issue #1 designation, we approached this title with a little apprehension because Marvel does have a habit of tacking onto the endings of other crossover epics.  The recap on the credits page takes care of that concern nicely, and allows all readers to follow this one without any additional backstory reading.

It also sets up what appears to be the primary theme of this title, at least for now:  “A vision of the future forced Clint Barton a.k.a. Hawkeye to kill his longtime friend and ally, The Hulk.  He went to trial and was acquitted of all charges.  The public sees him as a savior.  The super hero community sees him as a pariah.  But how does he see himself?”

That recap also explains why Hawkeye is a team of one, and traveling the U.S.A. on a solo mission of exploration and adventure.  His travels in Issue #1 take him to Santa Rosa, New Mexico where he is recognized (no longer wearing a mask) as Hulk’s killer and a hero to civilians.  He learns of a suspicious contamination of the local drinking water, formerly supplied by an Indian reservation, and decides to investigate.  The local sheriff pairs him up with her deputy, who happens to be the native American hero Red Wolf.

A group of mercenaries is out to stop Hawkeye from finding out too much.  We don’t find out what their primary purpose or role is, but they seem to be connected to a more powerful super-villain. It’s a good beginning.

STORY:  The story is engaging, has a good amount of action, and moves forward quickly.  We like the method of revealing what Hawkeye is thinking and philosophizing about in the often amusing narrative captions.  We’d love to know what happens next, so picking up Issue #2 is on our list for December.  2 points.

ART:  We’re fans of the clean and concise style of Pacheco and love the action scenes.  His use of between seven to nine panels on the action pages allows him to convey a lot of the fighting without taking up more space.  2 points.

COVER:  The cover does seem to illustrate what the title means, especially the “Occupy” portion.  Only seeing Hawkeye on the cover may lead some readers to think this is not a team book, and they may be right. So far, we’re not sure.  1.5 points.

READ AGAIN?  It’s a good read.  While not a complicated story, there are plenty of details and secondary information to be gained from repeat readings.  1 point.

RECOMMEND?   Yes.  While we aren’t in the habit of recommending many Marvel titles, this could be one worth following, if Issue #1 is a good example. 1 point.

TOTAL RANKING:  7.5 points.  Many superhero readers will be disappointed if they miss this.