EDITOR’S NOTE:  We are all for a diversity movement in comics publishing, a movement that should also be reflected in the characters in the stories. If the comics industry wants to flourish in the decades ahead, it needs to nurture and grow writers, artists, editorial and production people from all races, religions, sexual orientation, philosophies and backgrounds - - and do the same thing with the characters in the books. Make them current and relatable so the readership can continue to grow. What matters even more is that they continue to publish great stories with great art. Then it doesn’t matter who the creators or the characters are.  Here are two offerings from Marvel Comics that reflect some of those changes . . . . . . . . . . 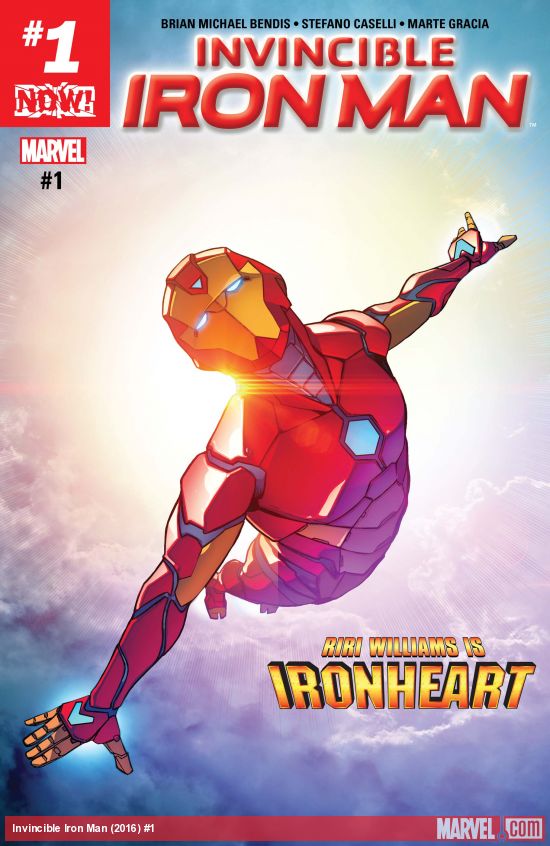 Talk about a radical change!  The person wearing the armored suit goes from a rich privileged middle-aged white male corporate executive to a teenage black female of superior intellect and technical/engineering prowess from a lower income neighborhood. That kind of abrupt change is enough to make everyone take notice.  Count me among the curious.  I couldn’t wait to check out the first issue!

INVINCIBLE IRON MAN is the most exciting and memorable Iron Man title that I have read in a decade.  You can’t get much more diverse than this.  Surprisingly, it works incredibly well, thanks to a good story with good art. It’s a much needed breath of fresh air for this franchise.

Among his many skills, writer Brian Michael Bendis knows how to script a young adult story and how to create a believable young adult character.  He’s done it several times before, from young Peter Parker in Ultimate Spider-Man to minority Miles Morales as Spider-Man to the young teen female protagonist in the graphic novel Takio.

Riri Williams is a very appealing and interesting character.  Bendis makes judicious use of flashbacks through the first issue to fill in her background. The supporting cast members, including secondary characters like her friend Natalie, are also well developed and interesting.  I’m looking forward to learning more about Riri and company in future issues.

When Riri was just five-years old, her parents learned that she was diagnosed as a super genius and made a decision to make sure that they provided for both her intellectual and emotional needs.  Flash forward to now and Riri is a young adult fresh off a short introduction to the world of Tony Stark faced with the challenge of wearing the armor and carrying on in his absence. Challenge Number One coming up:  curtail a mutant with monster-generating powers.  Just like many super-intellectuals who process and analyze the heck out of incoming data, RIri makes life more difficult for herself by over-looking the obvious.  We all know some intelligent 6people like this - - - super smart isn’t the same as street smart.

STORY:  The constant cutting back and forth from current action to flashbacks from five years earlier can be a little disorienting to readers, but it’s an essential way to provide insights that help readers understand and stay engaged with the main character.  It seems like the perfect balance between action and explanation. Riri Williams is a great creation. Easy to like.  2 points.

ART:  The art of Stefano Caselli is very expressive, and really enhances Bendis’ dramatic moments through the use of facial expressions and body language. There is a tragic incident when Riri is 12 years old that really illustrates the power of Caselli’s images. The action scenes also have good flow and dynamism.  Very well done. 2.5 points.

COVER:  Simple yet effective. A different looking Iron Man suit with the caption “Riri Williams is Ironheart.”  That lets the reader know this is a new beginning.  1.5 points.

READ AGAIN?  I’m sure that if you’re going to follow this book, you will be returning to this issue to read the background information once again.  1 point.

RECOMMEND?  Yes. This is a refreshing surprise.  While the story of Riri Williams has been developing in the pages of the former volume of Invincible Iron Man for several issues, this is the key issue where the transfer of responsibility occurs.  That deserves a new volume and a #1 issue designation.  1 point. 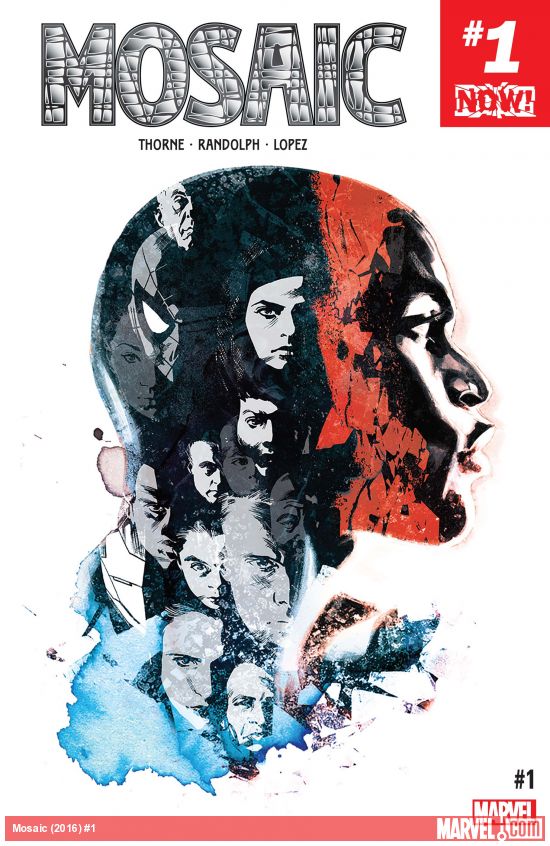 This is a brand-new character debuting in their own series, something Marvel hasn’t done for quite awhile. Sorry to say that while the character does reflect the diversity movement,  the story fails to provide readers any reason to like or relate to him.  In fact,  Morris Sackett seems a little too stereotypical — the selfish professional basketball player with an arrogant attitude and a sense of entitlement. His father-manager, Pops, is a more sympathetic character who acts like a parent should when his son is in danger.  But he needs more development, and just seems like a prop so far.  Ditto for Morris’ girlfriend Tia, who is a wooden one-note selfish gold digger.  Can’t empathize with her, either.

The wonderful world of Morris changes on the day a wandering Inhuman Terrigen Mist floats across a high-rise post-game party and slaps him inside a cocoon, awaiting emergence as something else. When he does come out, he has body transfer powers like DC’s Deadman, with an additional ability to instantly learn the memories of the body he is possessing while also keeping his own as well as those of anyone he possessed previously.

Where did his Morris body go?  And is his new symbiotic cosmic alien-looking body visible to anyone else?  None of these things are explained.  It does appear that he can make the transfer simply by touch, but the art only hints at that rather than showing the actual process.

Morris inhabits the body of a gang-member just before he’s involved in the robbery of a Russian mob hangout, and things don’t go well. A little too much happens this issue while not enough is explained or revealed.  As a consequence, all the secondary characters come off as cardboard cut-outs of more generic stereo-types.

STORY:  It’s an interesting premise, but not told in an interesting manner.  Geoffrey Thorne is a writer new to comics, and it seems like it’s going to be a steep learning curve.  1 point.

ART:  If only the story could be as good as this art!  If you’re familiar with the work of Khary Randolph, then you know what a creative talent he is.  Atmosphere. Shading. Angles. Character expressions.  He’s a real stylist and worth viewing.  3 points.

COVER: Very expressive.  The cover is a mosaic of faces inside the profile of an even larger face, and symbolizes the powers of the main character.  Very well done.  2 points.

READ AGAIN?  Not really, unless you want to get frustrated twice.  Zero points.

RECOMMEND?  No. There’s nothing to interest me or bring me back for more. And with the high price of comics today, I don’t feel like giving any title a first-story arc try-out before I make a decision on it.  I need to be impressed with the first issue I pick up.  Zero points.

TOTAL RANKING: 6 points. Pass it up unless you are too curious not to, or a Khary Randolph fan.