How is it that I’ve never read a Terry Moore book prior to MOTOR GIRL?  He’s been publishing several high-quality, award-worthy works from his studio in Houston, Texas since 1993. 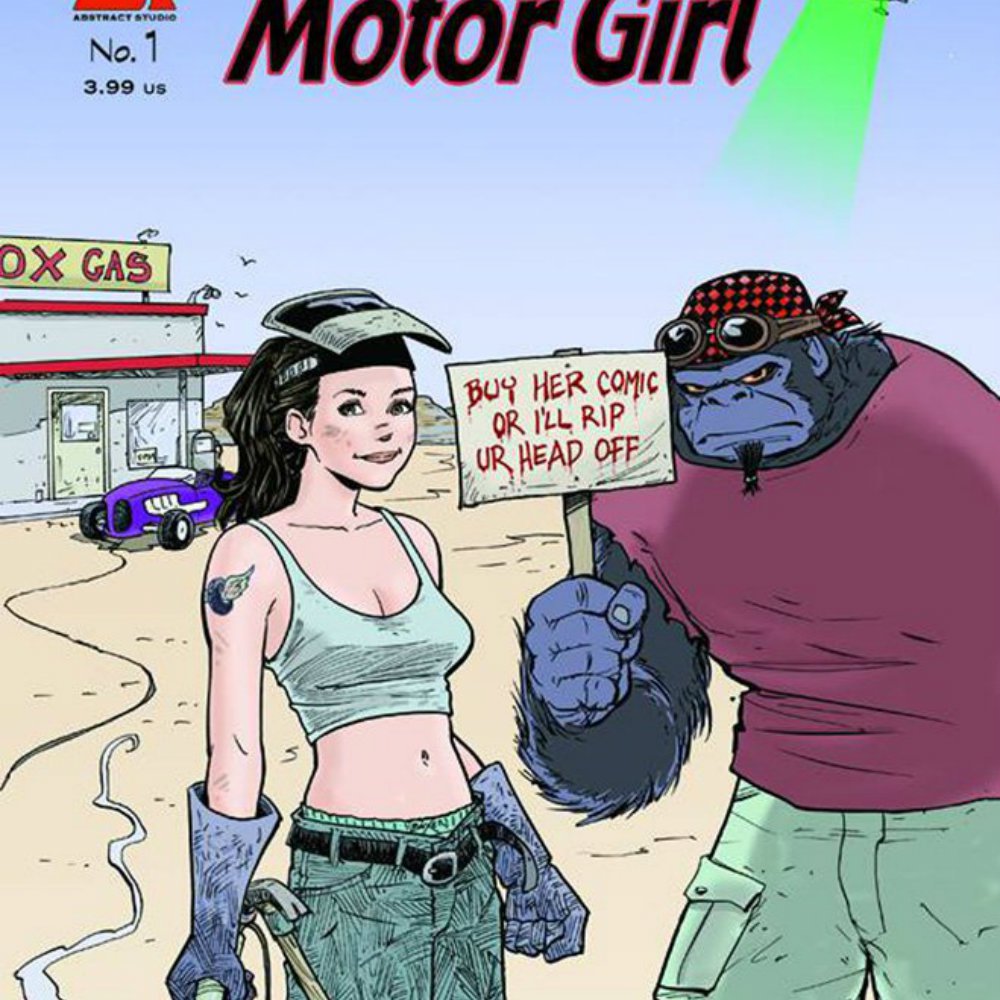 STRANGERS IN PARADISE (1993-2007), his first project, won an Eisner Award in 1996 for Best Continuing Series. I haven’t read a single issue, an error of negligence I may take steps to correct soon.  Somehow, I also missed ECHO (2008-2011).  Perhaps the most overlooked of all is the horror-themed RACHEL RISING (2001-2016) winner of a 2014 Harvey Award for Best Lettering, and a 2015 Harvey Award for Terry Moore as Best Cartoonist. There have been various nominations over the years for more Harvey and Eisner awards, most recently the Inkwell All-In-One Award nomination for 2016.

Maybe you have the same problem as I.  There’s just more quality books out there than a single person has time to read (or purchase). It’s a good problem, and more evidence that a comic renaissance has been going on for some time now.  Perhaps going on under your nose if the only books you read are published by two big companies, but never mind that point for now.

Moore’s reputation is that of a cartoonist with a style similar to the work done by both Dave Sims and Jeff Smith, although Moore’s work has more of an adult appearance to it versus the more cartoonish style of Sims and Smith.

What it reminds me most of is various action-adventure daily newspaper comic strips that were once so popular.  That is the look of MOTOR GIRL. Moore takes care not to clutter panels with extra background details.  The details that are provided are very well defined and visualized.  Moore has mentioned in previous interviews that the work of Charles Schulz on PEANUTS is his greatest influence. Lastly, the black and white format of MOTOR GIRL helps reinforce the feel of a newspaper strip. 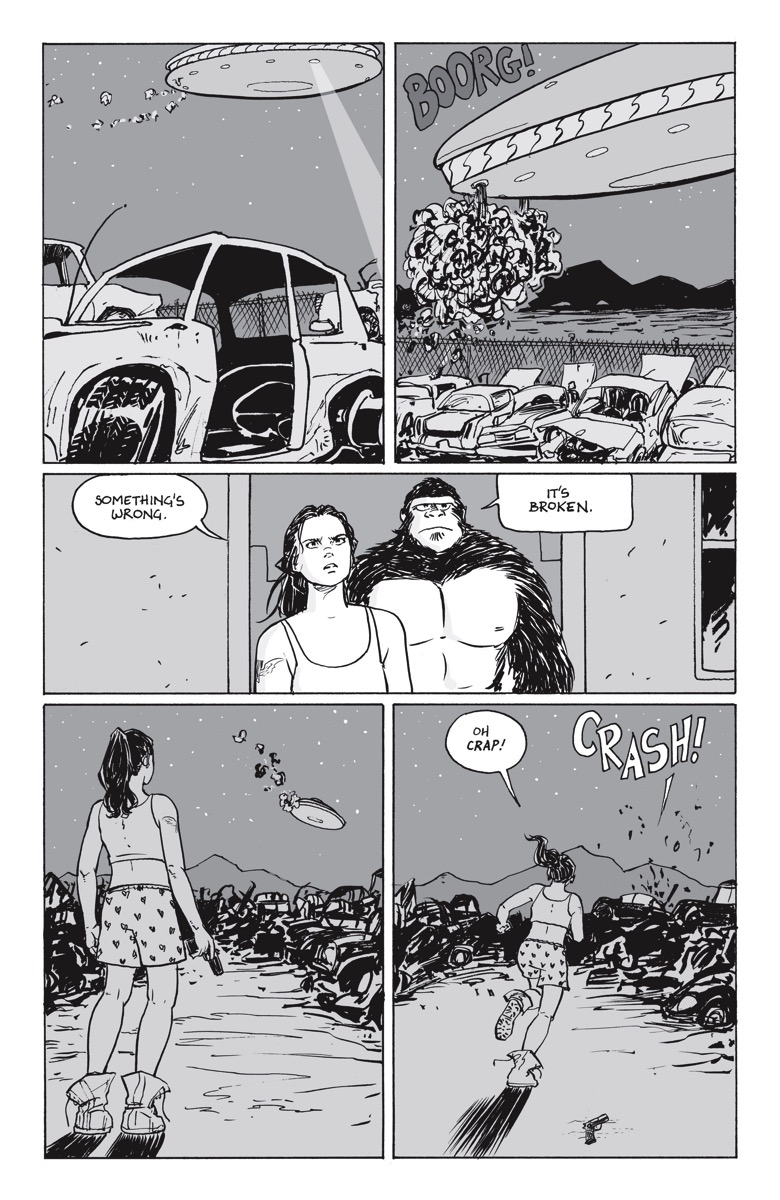 So who is Motor Girl?  Samantha is a young, athletic, and nimble car mechanic with strong opinions on various issues: the end of civilization, drivers who text or post on Facebook while piloting their “killing machines”, driverless cars, and extraterrestrial life. Her desert junkyard companion is Mike, a sarcastic and cynical gorilla who she confides in, and may be invisible to everyone else (or an imaginary friend, more likely).

Life is not without complications for Samantha (a.k.a. Sam). She longs for a different lifestyle. However, when the grandmotherly landlord mentions a potential sale of the junkyard and a way out for Sam, she hesitates. Moore has an economy of writing style that allows him to insert a great amount of detail into the pages. We quickly learn that Sam’s mother may be ill. Sam herself may be ailing, suffering from frequent severe headaches. Those may be related to her three tours of duty, which included her capture and solitary confinement. And why does some mysterious person want a property in the middle of a desert so bad that they double their offer?

When a disabled UFO crashes into the junkyard in the middle of the night, Sam and Mike meet the aliens and repair their vehicle.The aliens are short, cute, and not threatening. They almost look the way Jeff Smith’s characters from BONE would appear if they wore space suits.  They speak in sound effects so its hard to tell if they thank Sam or insult her as they quickly depart.

In the sketch pages in the back of the book, Moore reveals that MOTOR GIRL is a project he planned to start after finishing STRANGERS IN PARADISE.  Instead, he felt compelled to begin ECHO, and when that finished he started RACHEL RISING. Now it’s 2016 and Motor Girl’s turn.

STORY: An interesting premise. We can see why Moore has become so popular. He’s a great storyteller who focuses on characters, and lets us look inside enough that we can relate to them. It’s a whimsical story told in a light-hearted fashion, but there are layers of complexity that may not be as wonderful and a depth of story that is hinted at. It’s hard to tell where the storyline may go from here.  The capsule summary on Comixology mentions Sam becoming a source for alien spaceship spare parts, which obviously earns the scrutinyy of Area 51 investigators.   2.5 POINTS.

ART: Moore makes the most of the newspaper strip format, and stretches the possibilities of what can be done.  Simple to look at, but with good detail. He obviously has great inking skills.   2.5 POINTS.

COVER:  Love the funny threat. The gorilla made me say that.  1 POINTS.

READ AGAIN?  Yes.  It’s fun, but serious enough that you can enjoy it again.  ONE POINT.

RECOMMEND?  The strength of this debut issue has persuaded us to follow this title. That’s a sincere recommendation.  ONE POINT.

TOTAL RATING: 8 POINTS OUT OF 10.  Good writing and engaging art. Don’t overlook this.