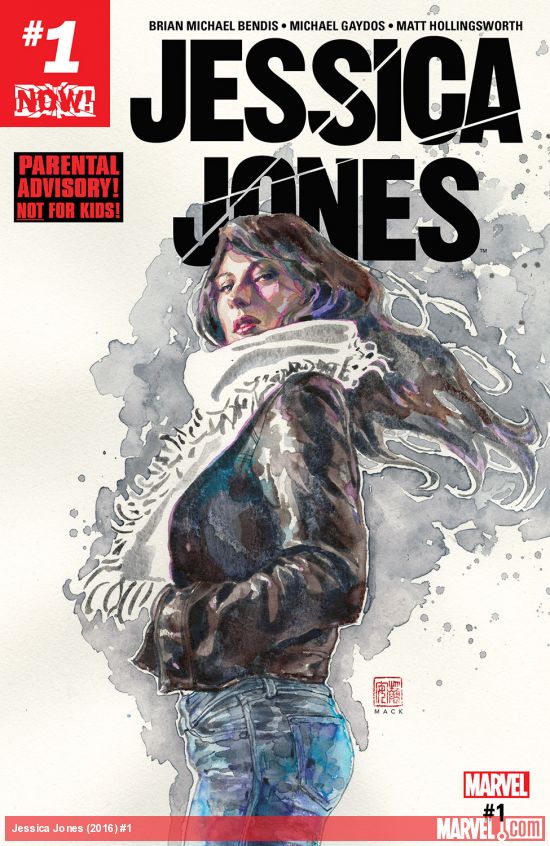 The Jessica Jones of recent Marvel comics has seen a lot of changes since then.  She had given up her private detective agency for motherhood, and was raising a baby daughter in a common-law marriage with the father — Luke Cage (now in a 2016 Netflix series of his own).  She’s been missing in action for some time now, since life became even more dangerous after Luke joined the New Avengers and their baby’s life was constantly subject to threats.  Jessica gave Cage an ultimatum — me and the baby, or The Avengers.  Cage didn’t go along with that, and Jessica and the baby disappeared from his life.

JESSICA JONES #1, the new comic, appears to be an attempt to bridge the gap between the two versions and blend the tv and comics realities together.  It starts out with Jessica being released from The Cellar, an NYC offshore prison for super villains.  Why she was incarcerated there and who secured her release are not revealed yet.

Neither is the whereabouts of her baby, although the existence of a baby does get acknowledged.  As soon as she gets back on mainland NYC, she is either being harassed at her apartment by friends of Luke Cage - -  Misty Knight ( as her Heroes For Hire persona, and not the detective of the tv show) and Jessica Drew (Spider-Woman).  She’s also receiving phone messages from Luke Cage asking about their daughter, and Carol Danvers (Captain Marvel) offering to help.

Jessica gets back into the private detective business, and decides to take her first new case. A very distraught woman states that her husband has changed and behaves oddly, claiming that he has a different wife and family and suddenly woke up living with her. She wonders if he is here from a different reality or parallel version of New York City. (This leads us to wonder if Jessica Jones is living in a different reality and has not realized it yet.  It could be how Bendis plans to bridge the different versions of this character.)  Anyway, Jessica agrees to investigate and tails the husband’s activities.

It’s an intriguing beginning which raises some questions, hopefully to be answered in the first story arc.  It’s the main reason we’re going to hang around for a few more issues.  Because this is a real slow book, full of dialogue, no action, and not much activity either. We hate to say this, but many readers are going to find this boring.

That’s a shame because ALIAS was a great title, Jessica Jones was a great character, and Brian Michael Bendis was the writer who brought a fresh approach to Marvel and revived interest in many flagging series. Those things all occurred at the beginning of the 21st Century.

Prior to that, Jessica Jones was a third-tier Marvel super-hero named Jewel, possessing super-strength and occasionally featured in The Avengers and other teams. She retired from the super-hero role and went into business as Jessica Jones, private investigator in ALIAS, the flagship title of a new MAX Marvel imprint for mature readers.  ALIAS broke new ground in story-telling, featuring mature themes, language, sex and characters with psychological issues.

ALIAS ran for 28 issues from 2001 to 2004.  The story goes that Bendis wanted to introduce Spider-Man and some other iconic heroes into the storyline, and the Marvel front office balked at that idea.  They didn’t want those characters appearing in MAX books.  So ALIAS was discontinued, and THE PULSE was born, a 2004-2006 series (14 issues) that featured some of the same characters but moved them into the greater Marvel universe (albeit toned down a bit from the MAX version).

Which brings us full circle to JESSICA JONES #1.  The jury is in session.

STORY:  What we like most is the return of the original ALIAS creative team, both writer and artist.  David Mack is even onboard to do the covers again (at least for one issue). Seems like old times. However, there are really only three things that happen in this story: Jessica gets out of prison, gets asked about her baby, and gets her first new case.  That’s not unusual for a Bendis-scripted book.  He excels at dialogue, so you can always expect a lot of panels with not much more going on than a view of talking heads and lots of conversation back and forth.  It was groundbreaking many years ago, but the wheels on the cart are getting rusty. Many are going to find this tedious and boring.  1.5 points.

ART:  Gaydo’s illustration style is like a cross between Alex Maleev and Franco Francavilla, and it suits this book.  The colors are also muted and somewhat drab, with lots of earth tones. The emphasis is on setting and facial expressions.  He’s good at it.  It’s not art to make us rave about it, but we appreciate the effect.  2 points.

COVER:  David Mack’s paintings are realistic and evocative.  But it’s asking a lot to create curiosity with just a profile of a comely lady in a scarf and leather jacket against a stark white background. In this case, it may work since Netflix viewers will recognize the profile. Others may pick it up and flip through it just to see who the lady on the cover is and what this is all about. Too bad Mack didn’t draw the entire first issue.  2 points.

READ AGAIN?  Not needed. You can absorb this completely after one read. It gets really boring on the second read. (Trust us on this. We did it.)  Zero points.

RECOMMEND?  Not at this time.  Maybe after the first story arc. Stay tuned. We do hope that fans of the Netflix show and/or the Jessica Jones of the comics will at least give the first issue a chance. They should make their own decisions.  We can’t recommend this book. Sadly. Zero points.