EDITOR’S NOTE: We continue our spotlight on WEIRD DETECTIVE, our nomination for the Best Mini-Series of 2016. It should also be in consideration for recognition in the horror genre, including the Ghastly Award and the Rondo Hatton Award. We plan to review each issue, and hope to draw more attention to this deserving creative work of imagination.

As Issue #1 ended, Detective Sebastian Greene (the alien version) seemed to be getting closer to locating the whereabouts of the Old Ones,  a location he was willing to compromise the safety of his new partner, Sana Fayez, in order to find. 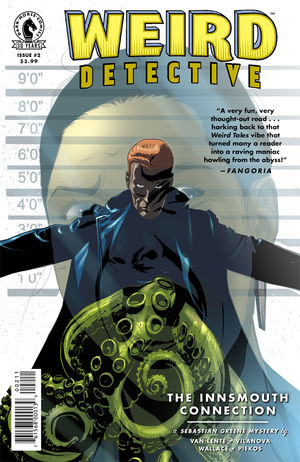 The lurid cover of Issue #2 transposes three figures over each other.  In the background is the transparent visage of Detective Fayez, eyes wide in open-mouthed fright. In the foreground in opaque detail is a squid-like tentacled creature advancing on Fayez. In the middle of this is the semi-transparent form of Greene, with beckoning but knowing eyes and arms spread as if to block the creature. The images in combination with the story title on the cover serve to make an ironic pun: ‘The Innsmouth Connection.’ Poor Fayez.

The credits page text updates the reader on what has occurred before:  ‘Detective Sebastian Greene, an ancient creature from beyond space and time in disguise, is trying to track down the Juice Box Killer, who’s leaving the empty skins of human victims all over NYC.  Greene’s own partner, Sana Fayez, has been ordered to spy on him by the suspicious brass.  So he’s tricked her into a trap set by the Deep One-tainted Anzio crime family to catch the boy they believe murdered their don’s daughter, when in fact they both were also victims of the JBK . . .’

Just when things look to be fatally perilous, writer Van Lente extricates our dual protagonists and manages to inject a little dark humor at the same time. Assaulted by some fishy looking men, who later identify themselves as alleged NYPD members, Fayez makes some observations in her captioned notebook: ‘Jesus, these guys didn’t get hit with the ugly STICK.  They got run over by the whole damn ugly TRUCK.’

Issue #2 moves the story along, continuing the blend of horror, crime and fantasy genres along with several pop culture references.  Greene discovers the location of the Anzio hideout on a river barge, where Edgardo Sr. is being held hostage.  The mysterious J. Randall Carter is introduced, an odd man who apparently sleeps in a bed of snakes and has a connection to NYPD Chief Malone.

Greene wants to persuade the department to provide some police force to assist at the barge, but his awkward understanding and confusion about human ways stops him from attempting. When the skin bag that was once Edgardo Jr is discovered, Greene realizes that he’s going to have to attempt the rescue on his own.

There is a great dialogue-free sequence of two pages where Greene sneaks around the barge and uses his elasticity to gain access. It helps showcase the skills of the art team and shines a spotlight on their work that some of the other panels don’t because of the dialogue and interactions going on.  Vilanova’s depiction of Greene in his light suit and hat recalls the image of television icon Kolchak, The Night Stalker.

The issue ends with another cliff-hanger, with Greene in a watery confrontation with the MOTHER of all sea creatures. Bonus content includes a pulpy-appropriate pin-up illustrated by the creative Rafer Roberts. 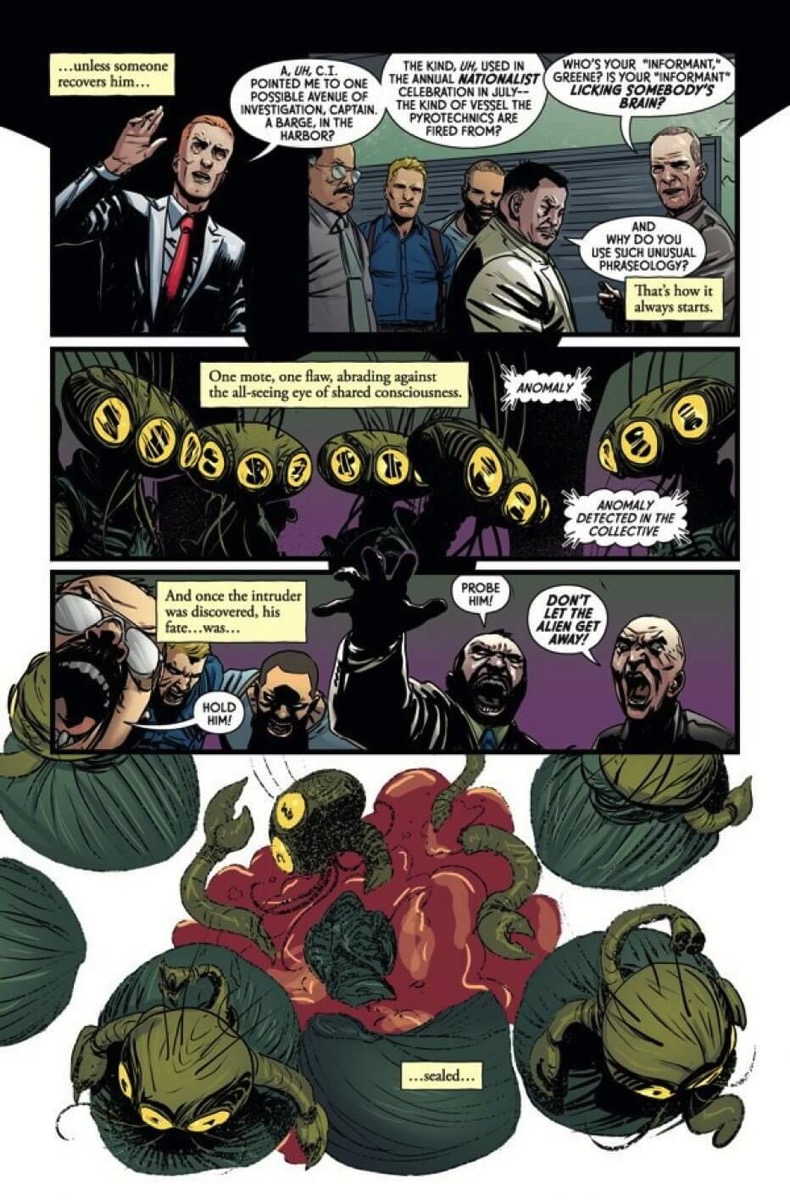 Issue #1 introduced us to the extra-sensory abilities of the inhuman Greene.  He has 17 senses.  Issue #1 included Rennekesh (emotionalocation); Ranos, (reverse sonar, just like the spelling); Mochadin (reading the mind through the eyes); and Aushure (a modest exclamation, as well as reading psychic impressions).

Issue #2 continues with the creative abilities, introducing two more senses:  Prubika (sense of mind reading the same way a blind man reads Braille, works by inserting elongated tongue in ear to touch the brain); and Dasein (blending in with your surroundings to be undetectable).

These amusing captions explaining the senses remind us of the use of captions in Van Lente’s run on ARCHER & ARMSTRONG to describe and explain the martial arts styles used in Archer’s fight scenes.  We had a chance to speak with him during his visit to Captain Blue Hen comics in June, and commented on the creative descriptions for the various senses used by Greene, curious about the source for all the imaginative names.

Van Lente admitted that they were all made up. He was inspired by famed magician Ricky Jay’s weird museum of made up stuff and artifacts, revealing that he ‘borrowed some of the names.’ Cool stuff.