Veteran writer James Robinson has had this project on the back-burner for three years.  It finally sees the light of day as Dynamite releases the first issue this week. What a bright and very welcome light it is!  GRAND PASSION is a unique blend of romance and crime portrayed in a gritty, grim style as befits the finest of hard-boiled crime movies. 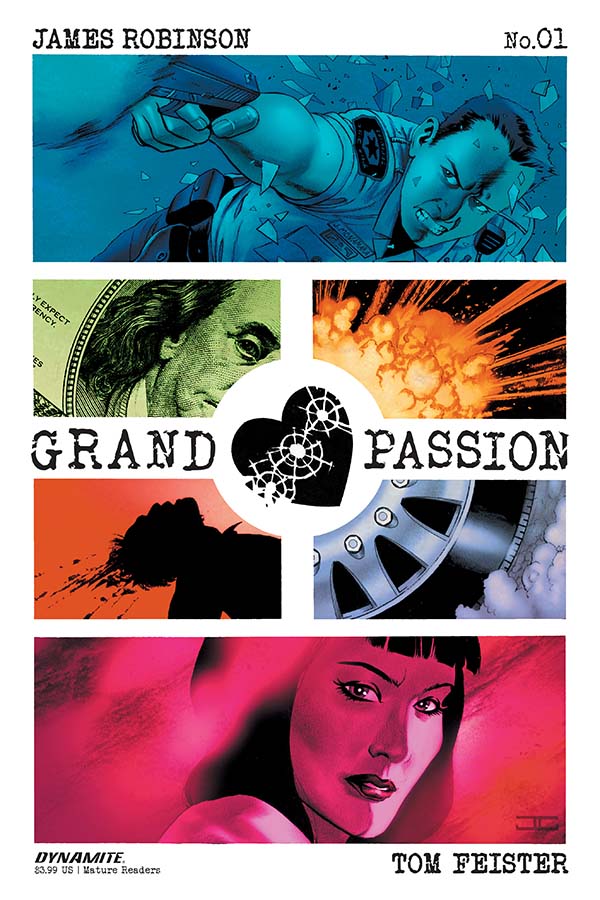 As Robinson explains it in a statement that has been quoted and posted on many a comics news site:  “Something I’ve noticed lacking in a lot of comics is unbridled romance. The crazy kind when it’s all life and death and love at first sight, so combining that with the hard-boiled crime milieu was something that really appealed to me. This is my attempt at doing something equal parts crazy love and crazy violent.”

Crazy good is what it is.  The first issue moves forward like a bullet train.  Even though there are enough quiet moments - - you can sense the tension boiling underneath. 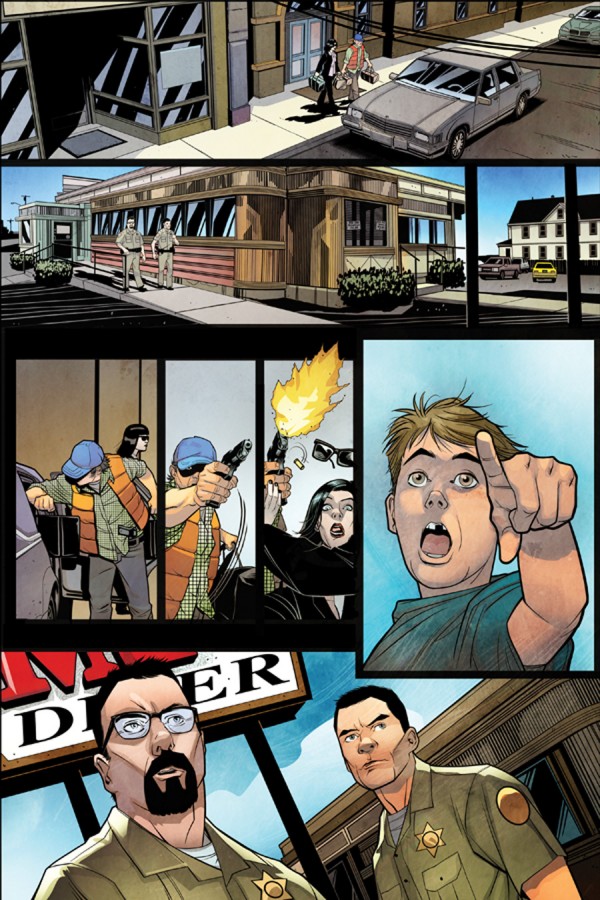 It’s a simple enough story. The magic is in the story-telling. Steve and Mabel are bank robbers. They carefully plan each stick-up and use different methods each time.  They don’t stay in one place for long.  When we are first introduced to the pair they are completing a successful robbery in Vermont.

Their next job is planned for a southern Illinois town, where Deputy James “Mac” McNamara has just landed a new job, hoping for a new beginning after losing his wife. It’s a sleepy and boring small town where everybody knows everybody, and the sheriff bears animosity towards Mac.

Mac mets Steve and Mabel just as they are exiting the bank after another robbery.  A gunfight ensues.  Mac falls in love with Mabel.  We don’t know if the feeling is mutual, but we do learn that Mabel lives by a strict thieves code that says she needs to answer by killing him.

It’s all over before the reader has time to take a deep breath. Looking forward to Issue #2.

STORY:  We love the pacing as well as the background details that Robinson adds to the flavor. Not much new romance this issue, but plenty of crime and drama.  2 POINTS.

ART:  Feister has a nice, crisp cinematic style that goes right along with the Robinson’s story approach. The use of very narrow multiple panels to indicate a lack of expression or reaction, and the flashing lights of a railway crossing are especially effective.  2.5  POINTS

COVER:  Clean and crisp like the story. Tells you what you need to know.  1.5 POINTS

RECOMMEND?  Yes. If you like crime comics and you want something a little different, check this out. (Also look for VIOLENT LOVE from Image, exploring similar ground but in a different way. 1 POINT.

TOTAL RATING: 8 POINTS. Prime crime, made to order. Don’t pass it up.