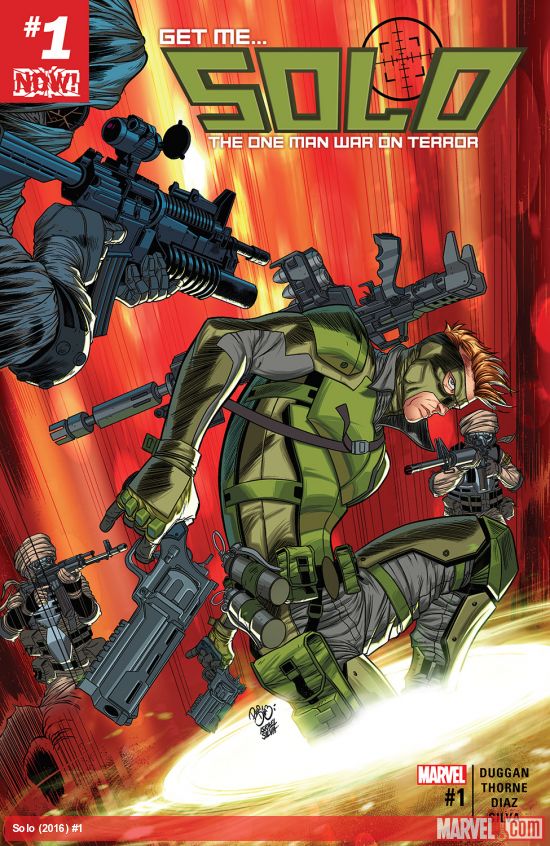 ht this might be another all-new original series debut from Marvel, but a little research and checking proved that assumption to be false.

SOLO revives a Marvel character from the 90’s, who even had his own four-issue limited series, SOLO, in 1994-1995.  In that story arc, he had some help from guest star Spider-Man.  Maybe Marvel felt that was needed in order to help sell the book.  In 2016, Solo has to go it alone.  Too bad for him.

Solo is a mercenary for hire, and like that other “merc with a mouth” he wisecracks and does goofy things to imply that he’s not as expert as he claims.  At least the humor is a level above the childish tropes of Deadpool. However, this attempt at a little more mature humor is also not amusing.

His previous history is recapped in the narrative captions on page two of the new issue, and tell you all you need to know about this character:  “Terrorists took the love of my life from me.  So I’ve spent the last few years paying terrorists back.  But revenge isn’t a great business model, so I take mercenary gigs.  My name is Solo, and I’m damn good at what I do.”  Apparently he got over the love of his life because he has a child with another woman that he chats with via phone right in the middle of his mission, and of course getting their dialogue confused with the feed from his artificial intelligence guidance system.  It’s not funny either.

I don’t think this book is going to click with readers.  It’s kind of run-of-the-mill espionage/spy fare that has been done better elsewhere.  Rumor has it that the 2016 SOLO is also planned as a mini-series.  If not, I can’t see it running more than 4-5 issues before being cancelled.  You can easily afford to pass this one up. 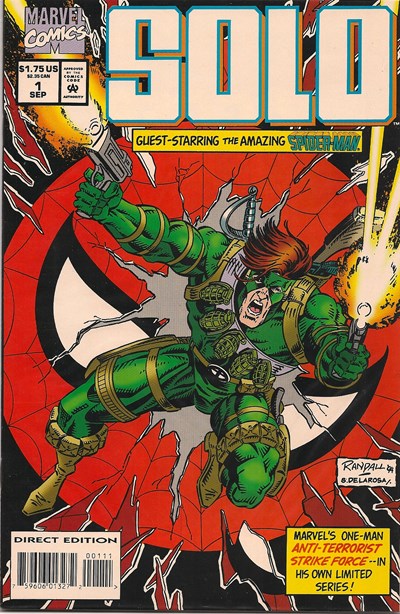 STORY:  The  whole premise for Solo’s new mission in Issue #1 seems contrived and unpractical.  The story opens with Commander Dum Dum Dugan of S.H.I.E.L.D. bemoaning the number of worldwide crises boiling over.  He does nothing about them and summons two rookies agents to review a minor mission, and instead of getting right to it he condescendingly teaches them a lesson in field maneuvers.  There’s a gunrunning gang selling alien weapons, and he focuses on this?  Seems minor compared to the other things that were brought up.  Or are we just filling pages here?  Then he grabs a file of “washout” agents and selects Solo to replace the current agent who’s not completing the mission. If he’s not satisfied with the performance of a veteran agent, why would pick a replacement from a washout file?  Isn’t the mission important?  The end of the story provides an explanation of sorts, but it’s weak. As if the editors caught the error, and the writers decided to put a band-aid fix at the end of the story instead of re-writing it.  Sloppy. Boring.  If I want to read these kind of stories, I’d rather get some G.I. JOE books from IDW Publishing. 1 point.

ART:  Paco Diaz is a good artist.  He’s a good student of anatomy and the action panels reflect this.  He matches the story with the appropriate facial expressions and body language. He uses overlapping panels and angular panels to good effect.  Too bad he’s stuck on this book.  2 points.

COVER:  The art on the cover indicates the type of activity that occupies our main character, and shows him decked out in his battle gear.  But the scene on the cover never takes place in the story.   1 point.

TOTAL RANKING: 4 points.  That’s a failing grade.  Save your time. 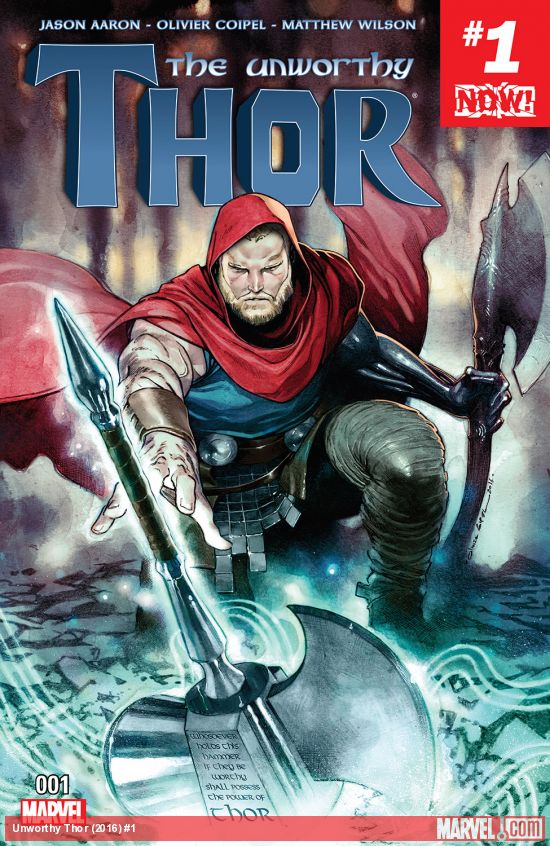 Fans of the son of Odin will be happy to see that he’s beginning to make a comeback.  Whether it ends in Thor recovering the mystic hammer Mjolnir remains to be seem, but this limited series is the start of his journey of redemption.  We’re glad to see Odinson (the name he is currently using) back in action.  You just can’t keep a good god down for long.

Without the hammer, Odinson no longer has the ability of flight.  He’s also lost much of his fighting edge, and gets the crap kicked out of him on a regular basis now. But he always gets back up. He’s still resilient, and determined. He gets around these days via a giant Asgardian goat. No joke.  The goat is grim, and not meant to be humorous. Thor needs his help when he mixes it up with trolls, especially against Ulik, their king.

Thor learns of the existence of another hammer of power, meets up with Beta Ray Bill, and begins a new quest.  Great stuff.

STORY:  Jason Aaron has been telling Thor stories for a long time now, and can probably do so in his sleep.  He gives the storyline the proper sense of the fantastical and the epic, but doesn’t forget to inject a little humor to keep things from getting too dreadful.  There’s a great scene where Odinson meets The Unseen, a next generation Watcher, who claims to see all.  Odinson jokingly asks him “Is that so/  Then what did I have for breakfast?”  The Unseen replies “Alcoholic beverages. And self-loathing.”  Odinson’s response: “Lucky guess.” 2.5 points.

ART:  Coipel’s art is majestic.  If I had to compare it to other illustrators, I’d pick the work of Barry Windsor Smith and Cary Nord, both on Conan. That’s what this reminds me of. It has a mythical quality that befits the story of a fallen god. 3 points.

COVER: A humbled and cloaked Thor reaching for the hammer. Indicates the theme of the book.  1.5 points.

READ AGAIN?  Maybe not right away. But after I collect a few more issues of this mini-series I’ll be re-reading the earlier issues, and then one final time from start to finish.  1 point.

TOTAL RANKING: 9 points. Pretty close to perfection. Get your own copy.