Editor’s Note:  WARNING. There are some spoilers in this review.  However, many readers are already aware what the surprise is, if they look at advance solicit notices or read the Marvel news. If that refers to you, don't worry about reading onward . . . .

The latest version of Moon Knight is Volume 8, a number which by itself reveals a lot about the ups and downs of this peculiar Marvel character.  There have been even more than eight writers try their hand at showcasing the tales of the white-garbed crimefighter, and a truckload of illustrators to put pictures with the words.

He began as Marc Spector, and at various times (depending on the Volume #) assumed the identities of Jake Lockley, Steven Grant, and probably some others that we’ve forgotten. He’s been dead. He’s been revived. He’s been committed. He’s in recovery.  He’s suffering from drug and/or alcohol addiction. He’s in recovery. In addition, in the most recent version prior to this, he even went through a uniform change thanks to writer Warren Ellis’ take on the subject. 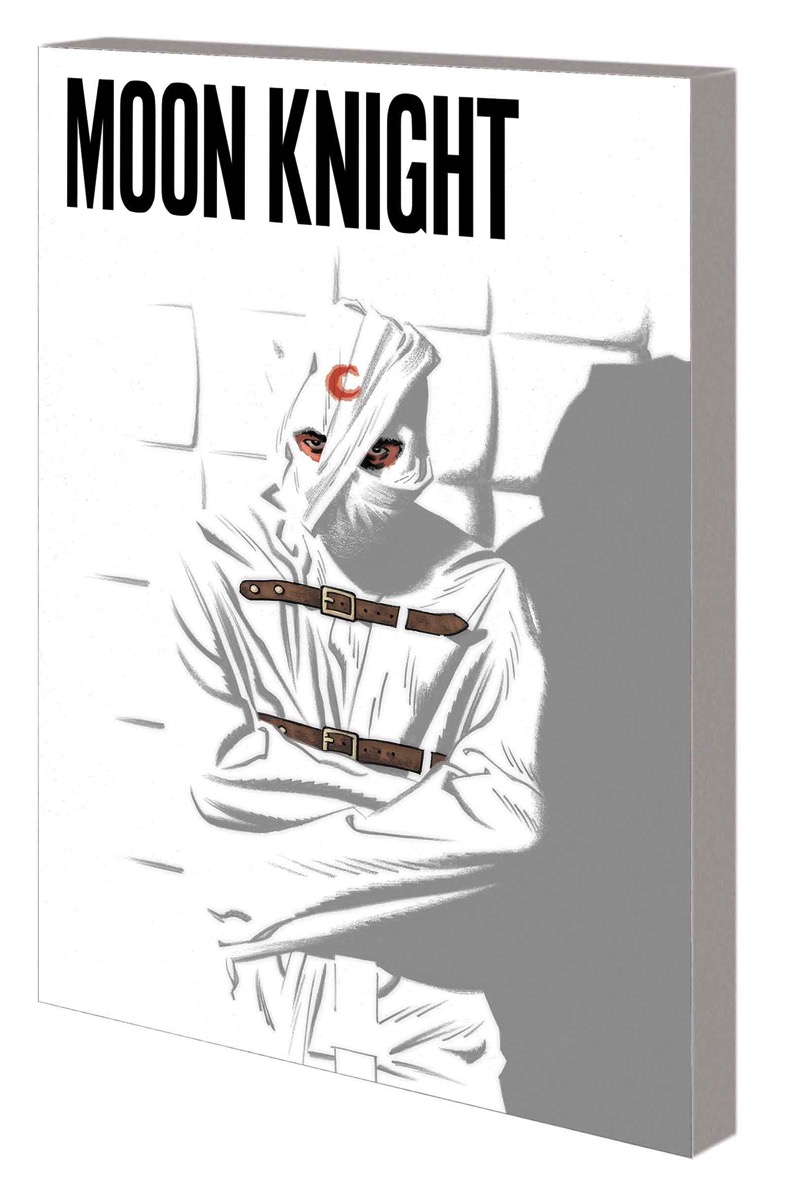 Now, gifted writer Jeff Lemire handles the reins.  If anybody is qualified to get into the personality and psyche of this character it’s Lemire. We like where this is going under his capable hands, although at times we’re not sure it’s going where it appears to be.

Lemire scripted a great opening four pages, and artist Greg Smallwood depicted the event perfectly.  A stumbling Marc Spector, wearing what appears to be a karate master’s garb, wanders under the moon light until a voice beckons him towards an Egyptian temple.  He meets  Khonshu, the moon god, and learns he is dying. Khonshu implores Marc to put on the Moon Knight face mask, explaining that in order for him to be reborn he must remember who he has been. Cut to a full page with a montage of the various identities that Marc has operated under.  Turn the page and get the shocker: Marc is wearing white scrubs, and is a patient at an institution for the mentally ill.

That could have been a classic opener, except for two things:  1) The cover to Issue #1 gives it away (Moon Knight in a strait jacket) and 2) the update text on the credits page gives another big hint:

“Mercenary Marc Spector died in Egypt under a statue of the Moon God Khonshu.  In the shadow of the ancient deity, Marc returned to life and took on Khonshu’s aspect to fight crime for his own redemption. He went completely insane and disappeared for a time, but returned to protect those who travel by night.  At least he thinks that’s what happened . . .”

Just how bad a state Marc is in is immediately revealed on the following pages. Two orderlies rough him up, heavily sedate him, and strap him down for some shock treatment.  All this is stunningly depicted by Smallwood in small rectangular panels of varying sizes surrounded by white border over a big portion of each page. There’s a funny and ironic scene where an orderly smirks and wishes “night, night” to Spector after injecting him.  In his beaten, weary, and drug-induced state Marc mumbles in response “knight, knight?”

Many of the patients look familiar to Marc, as if he’s known them in some previous version of his life.  Some seem to acknowledge him. Others don’t. And one particular elderly patient, Crawley, tries to convince him everything is a facade.  The counselor tells Marc he’s been a patient there since the age of twelve, and Moon Knight is a boyhood fantasy that he wrote in his journal about. He’s diagnosed as having Dissociative Identity Disorder. Marc goes back and forth during Issue #1 - - believing and disbelieving.

He still hears the voice of Khonshu telling him that the god Seth is trying to take over and only Marc can stop him. Mask on, he sees evidence.  Mask off, he sees normality.  Marc eventually escapes into the night air, in a stunning scene that reveals a city half-buried in sand and jackal-headed winged warriors flying around.  At this point, neither Marc nor the readers know what to believe.  It’s a great set-up and a great ending to the first issue. We were hooked. We had to read the rest of the first story arc.

Issue #2 goes back and forth between Marc’s treatment at the institution, his counseling, and his visions, memories and night-time visits from Khonshu telling him of the master plan. He attempts to break out along with some other patients. Sometimes Marc sees the mental institution and the abusive staff. Sometimes he blinks and sees himself as a captive of Egyptian dog-faced warriors determined to keep him from crossing over into their reality. Eventually,Marc does gets out of the building, wearing the Ellis version white suit and mask,  and has to decide if he’s fleeing through a city covered in sand and pyramids, or is it the streets of New York? Just when it seems that the gods have been telling the truth, along comes Moon Knight in Issue #4 to confront imposter Marc. Who is the real Moon Knight?

The special treat awaiting readers in Issue #5 is the addition of more artists to illustrate different aspects of the story, to help reflect as many versions or personalities as Marc can juggle in his head. It’s fun to look at the pages and try to determine which of the artists was involved, including Greg Smallwood again with Wilfredo Torres, Francesco Francavilla, and James Stokoe. There’s a final surprise when Marc meets Khonshu face to face, hears the real master plan, and yet another version of reality intrudes into his world.

STORY: Clever writing. Just when readers may feel they have a grasp on things, a new bit of evidence or some persuading dialogue will point to another direction. It was certainly fun during the first story arc. However, eventually Lemire will have to settle on a personality for Moon Knight to settle down in. I’m guessing we’re going to see that in Act Two. I think Lemire is having fun along with us.  2.5 POINTS.

ART: Good, solid art and an impressive use of white in the borders and backgrounds. Just don’t overdo it, because it means less panels of art and story per page.The guest artists on Issue #5 was a nice bonus.  2 POINTS

COVER:   All of them have been interesting while somewhat simplistic. Just head shots or profiles against a white backdrop. 1.5 POINTS

READ AGAIN?  Yes.  Thought it might help me figure it out. Not with any certainty at all. But I enjoyed reading these scenes again. 1 POINT.

RECOMMEND?   Yes, for now. Have to see how this holds up in the long run. 1 POINT.

TOTAL RATING: 8 POINTS. Solid. You should be reading this.