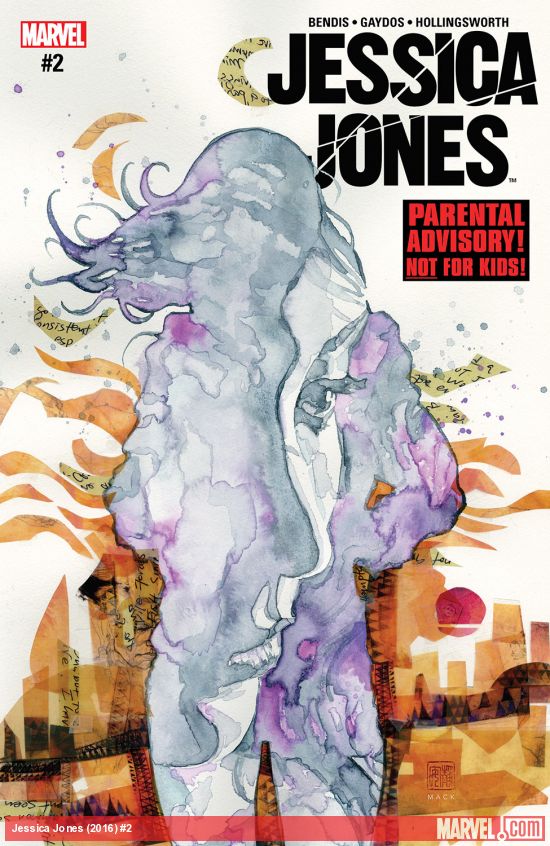 ic opening credits.  Marvel seems to be following suit with the comic version, using David Mack to create expressionist images of the main character.  Issue #2 is a painted scene of Jessica Jones facing the geometric images of a city scape.  Viewed in a different way, it’s also a side profile of her face in contemplation.  Nice touch.

It’s also a good move in that it helps dissuade younger readers; in addition to the box on the cover that proclaims ‘Parental Advisory! Not For Kids!’  in vivid red against a black background.  I can’t imagine a young reader looking for a Marvel superhero book picking this up based on the cover art.  There’s actually nothing explicit in the story so far, just some language and adult situations.  JESSICA JONES is short on action, and long on character conflicts and introspection.  This book would probably be judged boring by younger readers.

In our review of JESSICA JONES #1  (see our archives for November 8, 2016) we wondered if the new Marvel NOW version of Jessica Jones would attempt to bridge the gap between the Netflix television version (which hews closely to the first ALIAS series) and the last Marvel version where Jones and her baby daughter were living in seclusion from father Luke Cage.  After reading Issue #2, the answer to that becomes clear. It appears that the new JESSICA JONES will pick up where the comics last left her.

Issue #1 raised two questions about unexplained situations. In Issue #2, one question get answered, and the other not completely. For readers unfamiliar with the series, last month’s issue could easily have made them suspect that Jones had abandoned her baby, or worst case scenario was a baby killer. The good news is that baby Danielle shows up this issue.  The other questions concerns Jone’s time in prison. We learn a little more in the credits page summary, but not enough:  “Jessica recently committed a crime that landed her in prison and enraged the super hero community.”  Wow! That must be pretty serious. Too bad we don’t learn anything else this issue. 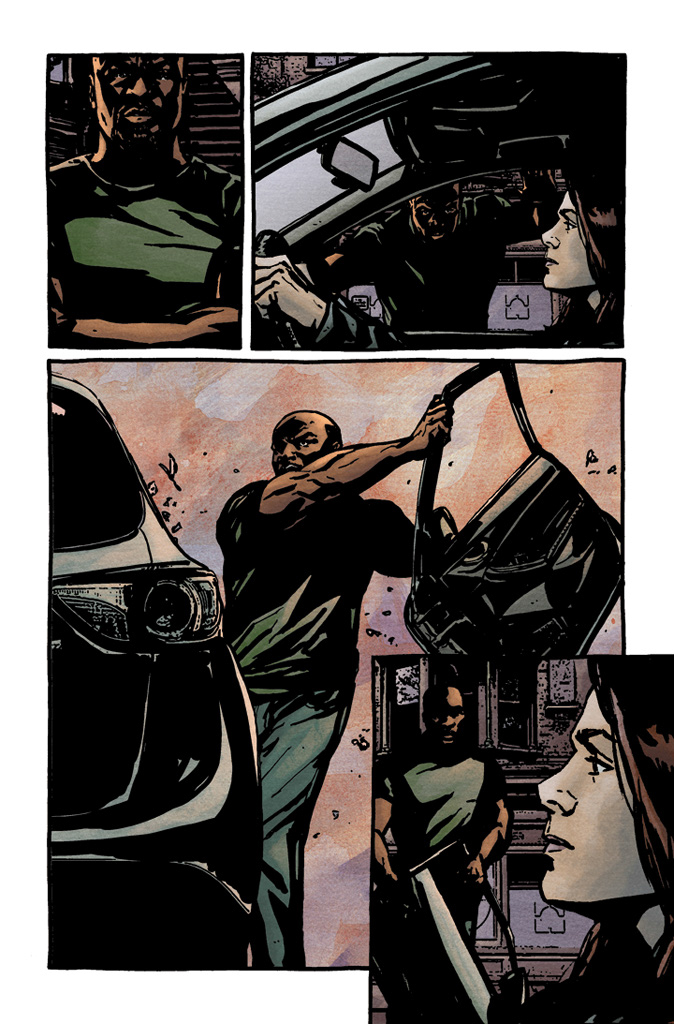 Issue #2 opens with an emotional flashback to Jessica’s pregnancy. She wonders about what kind of baby will two ‘genetic freaks’ produce, and will ‘he/she/it’ have a normal life?  She’s in pain from the pregnancy and suffering from high anxiety and self-doubt. Surprisingly, Luke provides the calming influence required.

Cut to the present, and Luke finds Jessica while on the stake-out of her new case, interrupting her for interrogation concerning the whereabouts of their baby daughter. It’s a key moment that won’t become apparent until later in the story when Jessica loses her first case and becomes a suspect in a homicide.

There’s still a lot of back-story that writer Bendis needs to update readers about.  At least there is some action this issue to go along with the conversations:  Cage demonstrates how to tear a car apart.  Jessica, rusty from non-use of her powers, struggles to fly and land properly. Finally, there’s an unexpected and unexplained attack on Jessica by the villain Spot.

STORY:  The standard Bendis story-telling technique is still in evidence: more panels with just conversations going on. At least the spoken words help move the story along a bit better than last issue.  And, there is more action this time. However, Bendis seems to be getting a little sloppy. He provides a thin excuse for why Cage wouldn’t guess the location of his baby daughter, when it should have been among the first places he checked. Also, a hotel receptionist seems to infer that Jessica has mutant or inhuman abilities, without any evidence to lead her to that conclusion. 2 POINTS.

ART:  As mentioned before, this is a bit darker than regular Marvel fare. The emphasis is on setting and facial expressions.  Gaydos is particularly good at this, and has worked very well with Bendis before. The action panels are also effective, but no wow factor. 2 POINTS

COVER:  David Mack’s paintings are well done. While they don’t reflect the contents or even hint at the story inside, they are still interesting to view. He’s a great expressionist. He’ll also be the artist on Issue #3’s cover, which looks great as well and includes a little hint that Hydra may soon enter the storyline. 2 POINTS.

READ AGAIN?  We did, and we were not bored by a second reading. There’s more snap in the scenes this time.  ONE POINT.

RECOMMEND?  Usually, this rating is an all or nothing decision. Either we recommend it to everyone for 1 point; or we recommend it to no one for zero points. While Bendis’ style no longer seems fresh, this does mark a return to one of his signature characters. That should be of interest to former readers of ALIAS and THE PULSE. That at least earns it ONE-HALF POINT.

By the way, it appears that this new version of JESSICA JONES will feature more interaction with Marvel Universe heroes and villains, so you can expect it to hew more to THE PULSE versus ALIAS.

TOTAL RANKING: 7.5 points.  A nice two point improvement from Issue #1.  We’re hanging on to see how this develops.