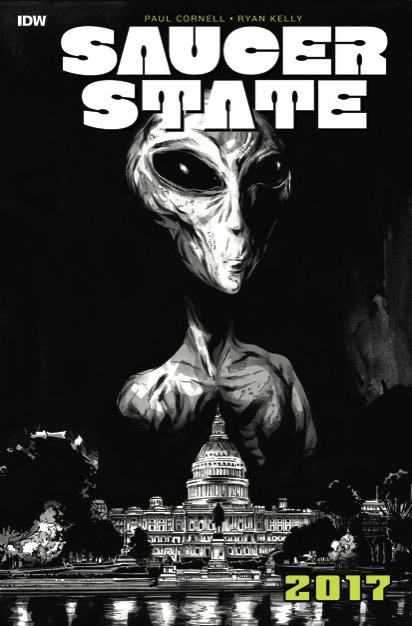 I’m a big admirer of the story-telling skills or writer Paul Cornell, which makes me excited to see him continue to work in comics with a new title. While the title is new, SAUCER STATE is a continuation of the story from SAUCER COUNTRY (DC/Vertigo 2012-2013), which abruptly ended (discontinued) after 14 issues.

In order to attract more readers and avoid a similar fate, I’m going to summarize the contents of the first SAUCER run.  The hope is that more readers will give it a chance this time, and pre-order the book.  (You knew we were going to work that message in here somewhere!) If you’re a fan of The X-Files, a UFO buff, or interested in stories dealing with alien lifeforms visiting Earth then you should give SAUCER STATE a look. Original series artist Ryan Kelly also returns to work with Cornell again.  Please pre-order the first issue and give it a chance.

Arcadia Alvarado is the female Hispanic governor of New Mexico, who is troubled by half-remembered visions of a

ight-time abduction by aliens.  She is also the leading Democratic candidate for the office of President of the United States, and wins the election. With even more resources behind her, she embarks anew on her mission to reveal the alien mystery.

She gains support from Professor Kidd, a former Harvard professor and UFO investigator.  Along with the challenges of governing a state while running a political campaign, and then rising to the responsibilities of President, Alvarado has to deal with a cowardly alcoholic ex-husband.

In previous interviews and also on his website, Paul Cornell  reveals his interest in UFO mythology and his intention to blend this into a political thriller with suspense and interesting characters.  The original series also featured stand-alone stories based on true accounts of alien visitation.

The original series was well received by critics, gaining very positive reviews from Comic Book Resources, IGN and other comic news sources.  It was nominated for the prestigious science-fiction Hugo Award in the Best Graphic Story category in 2013, but lost to the first volume of SAGA (which seemed to grab all the awards that year).

EDITOR’S NOTE:  No matter how good a book is, if the sales aren’t there it will be discontinued.  Understanding the economics of keeping a local comic shop profitable, it’s not hard to see why.  Being a non-superhero title, local stores most likely ordered only a few copies or none at all.  Not enough readers saw the book.  Without exposure, each succeeding issue probably sold less and less until most shops stopped ordering it. Visibility counts, and then word of mouth will help propel a quality book into recognition and more orders. With the glut of books that comes out each month in 2017, I wouldn’t be surprised to learn that some stores are passing this up, unless of course some of their customers pre-order it.  Do you realize that some shops look at those pre-order numbers each month, and will actually order more copies to stock their shelves if they see multiple orders for the same title?  This is a good one to get behind.