EDITOR’S NOTE: There are so many good books to recommend this month that we’ve passed the half-way point without finishing our picks. However, there’s still time to get your December Pre-Orders into your local comics shop for books scheduled to release in February 2017. Don’t take a chance on the books you want (especially from the smaller publishers) waiting for you on the store shelves. Help yourself and help your local shop by ordering in advance. Here’s some more of our picks for your consideration, as we look at some books from TITAN COMICS and VALIANT ENTERTAINMENT . . . . . 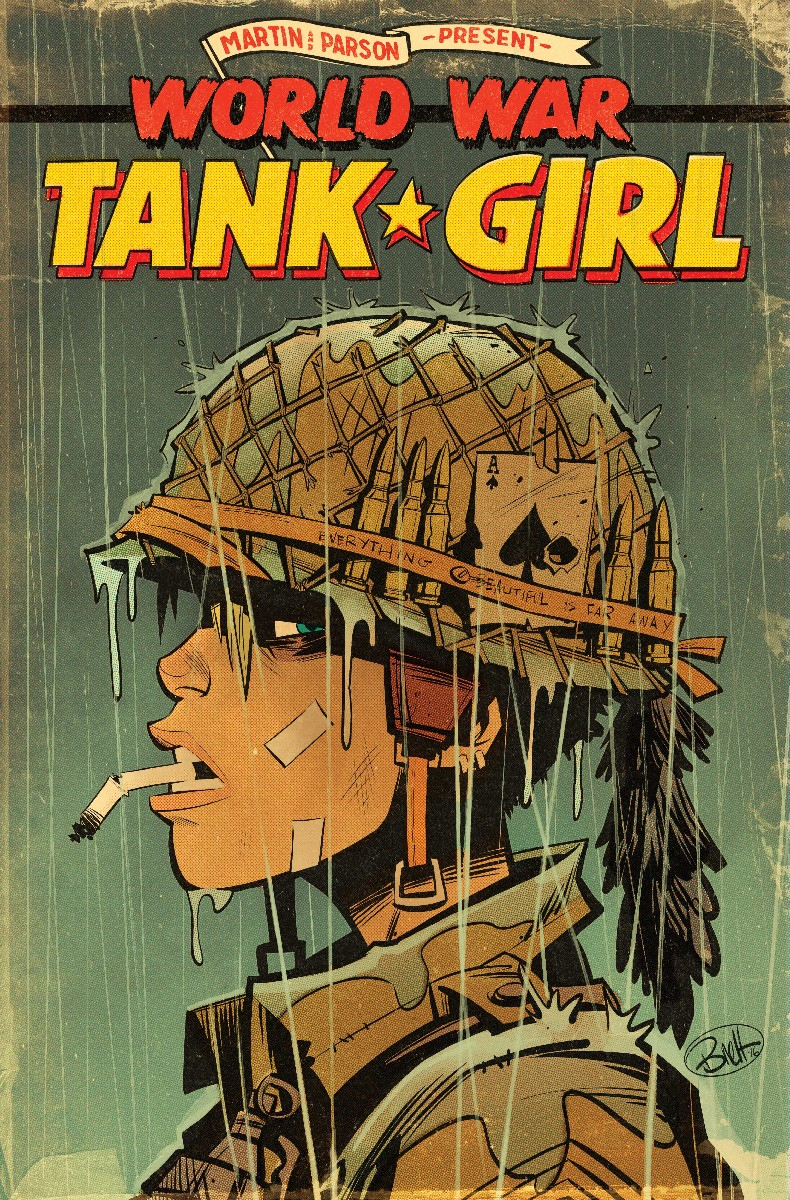 Tank Girl is one of those ‘love’ or ‘hate’ characters and stories. Nevertheless, new stories of Tank Girl continue to be published and avidly read, and the character has endured since her inception and first publication in 1988.

The original British comic book series was set in a post-apocalyptic Australia, with Tank Girl driving and living in a tank, as you might have guessed. Tank Girl was quite rebellious, with daring sexual inclinations and substance abuse issues. The comic reflected the punk movement of the times, and for awhile Tank Girl came to symbolize the empowerment of women in punk culture.  If the only Tank Girl readers are familiar with is the unsuccessful and terrible Tank Girl movie, then they don’t really know Tank Girl. Let this new series, written by one of the co-creators, be your introduction.

From the Previews catalog: “With a few bars of gold left, and Sub Girl’s uneasy feeling that she left something behind, Tank Girl hires her scientist friend to reinvent time travel.  The Third Reich have no idea what is coming their way.” 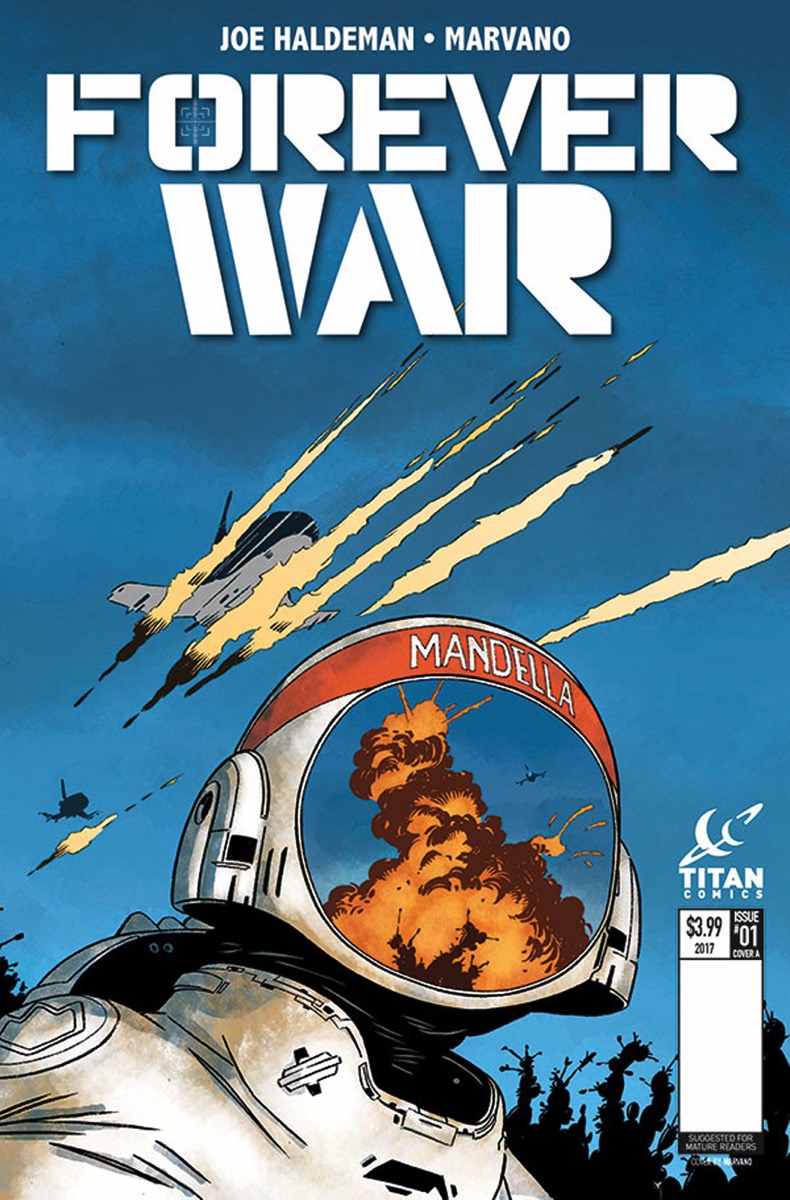 We’ve got a long-time familiarity with THE FOREVER WAR novel and the work of author Joe Haldeman. In 1975, we attended our first science fiction convention in Pittsburgh, PA where Haldeman was guest of honor, having just won and award for the book. (We have an autographed copy still in our library). We are very excited to see Titan publish this adaptation of the novel to the comics format.

THE FOREVER WAR (1974) is military science fiction, revolving around an interstellar war between humans and Taurans. The main character, Mandella, is based on Haldeman, who completed military service during the Vietnam War. The book has been called “an account of his war experiences written through a space opera filter.” It won the Nebula Award (1975), and the Hugo and Locus Awards (1976).  Haldeman would later return to the Vietnam War as subject matter in 1968, another fictional account of a soldier’s experiences there and return to the United States.  THE FOREVER WAR has also inspired a graphic novel and a board game.

The new Titan series is a reprint of the 1988 Belgian graphic novel trilogy drawn by Marvano and co-written with Joe Haldeman.  That series focused on the dehumanizing effects of war and its attendant bureaucracy.  We recommend it. 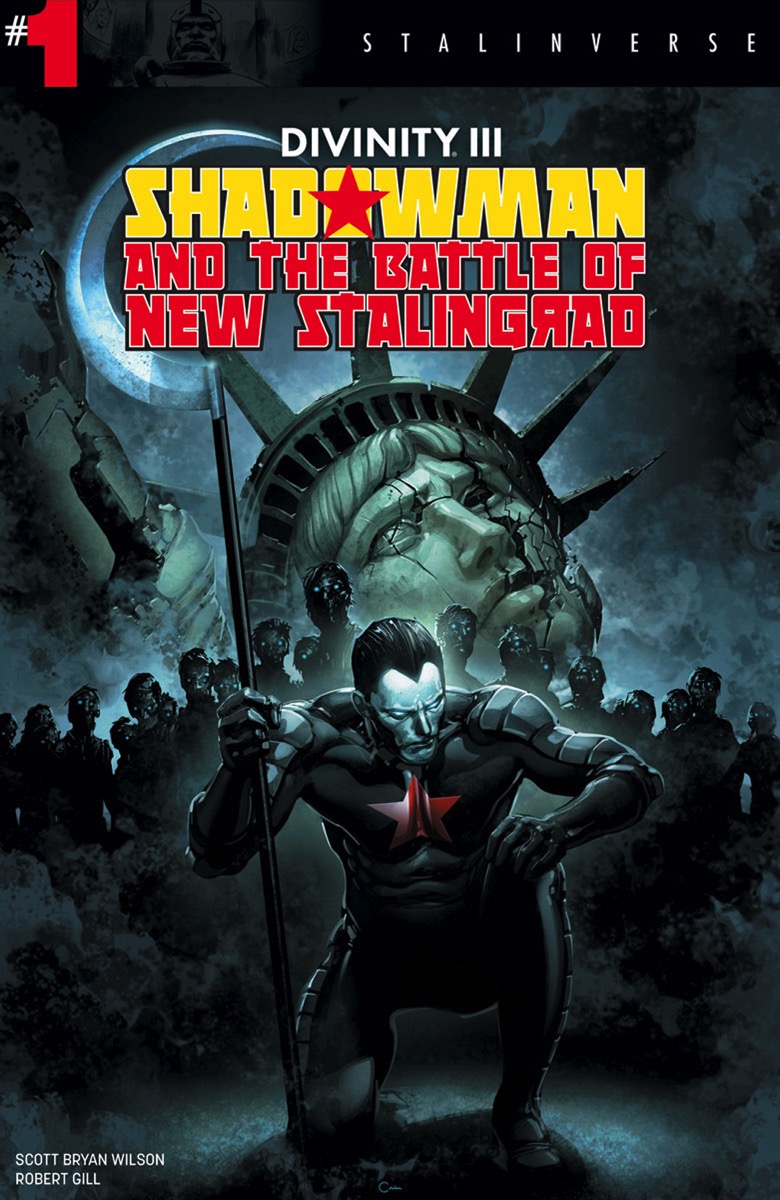 We highly recommend the DIVINITY II series and all spin-off one-shots that debut over the next several months.  The premise for the entire series is creative and diverse, and the preview art we have seen is just amazing.  Here’s the lowdown on the Shadowman book . . . .

From the Previews catalog:  “Welcome to the world of today. Welcome to the Stalinverse. The visionary, event-level epic of the winter continues here in an all-new all-star special introducing the secret weapon of the Soviet Union: Shadowman, agent of the USSR.

The save the devastated and oppressed island of New York, Jack Boniface might just have to annihilate it first — by leading an army of Deadside-spawned monstrosities onto the streets to fight the Soviets’ super-powered shock troops wherever they stand. But freedom fighters like the one they call Shadowman seldom get the happy ending they deserve . . . .” 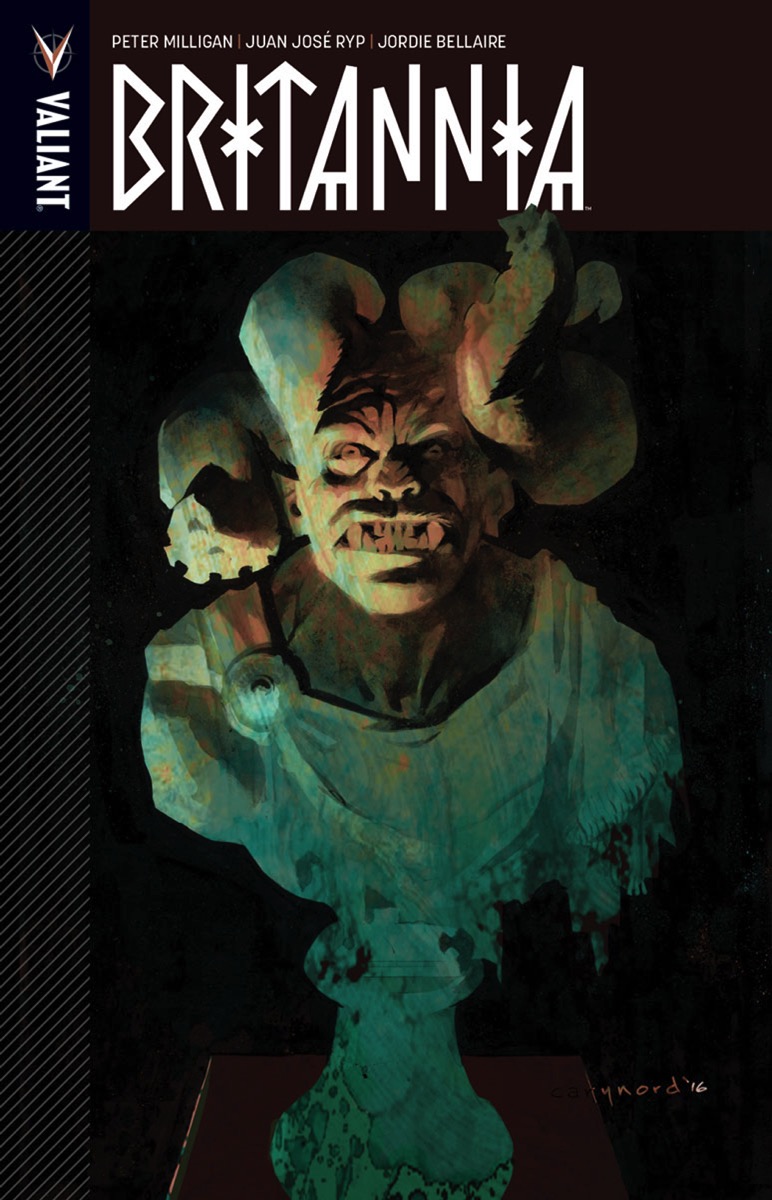 Most of the early history of Great Britain was unrecorded or destroyed, except for the accounts written during the Roman conquest years, which naturally have a Roman Empire flavor/favortism and may not be entirely accuruate. Writer Peter Milligan has done an incredible job of research and peppers his account of Roman-occupied Britain with accurate details.  True to their generous nature, Valiant makes yet another Volume 1 trade paperback available for just $9.99.  You can’t go wrong. Pick this up.

From the Previews catalog:  “On the fringe of civilization, the world’s first detective is about to make an unholy discovery . . .

Ruled by the Fates.  Manipulated by the Gods.  Commanded by Caesar.  In the year 65 A.D., one’s destiny was not his own.  At the height of Nero’s reign, a veteran of Rome’s imperial war machine has been dispatched to the farthest reaches of the colonies to investigate unnatural happenings . . . In the remote outpost of Britannia, antonius Axia — the First Detective — will become Rome’s only hope to reassert control over the empire’s most barbaric frontier — and keep the monsters that bridge the line between myth and mystery at bay . . .”