EDITOR’S NOTE:  Last month we started a new feature, looking through the monthly PREVIEWS catalog and highlighting some books we feel are worthy of your attention.  It became a massive task, as there were a large number of books from various publishers that needed to be singled out.  But not an exhausting task.  We feel invigorated and excited about the diversity and creativity currently prevalent in today’s comics.  We also feel that by identifying specific books - - our readers obtain additional insight into the types that appeal to us, and are better able to judge what books would interest them.

Since we’ve already singled out our favorites last month, we are going to pare down that mountainous list this month and concentrate on brand new titles or series.  That should make the list more manageable.  We’re not going to list something just because it’s a #1 issue or it's a “ rebirth".  We expect the title to bring something new or different to the table, based on what we know about the concept and/or the creators.

s book has already made comics history.  Now it has a chance to reach a bigger audience.  MATURE THEMES.

From the PREVIEWS catalog:  “It’s here!  The comic that blazed through Kickstarter during Black History Month 2016.  In a world that already hates and fears them —what if only black people had superpowers?  After miraculously surviving being gunned down by police, a young man learns that he is part of the biggest lie in history.  Now he must decide whether its safer to keep it a secret or if the truth will set him free."

THE FOREVERS #1: Writer Curt Pires.  Artist Eric Pfeiffer. Stories about selling your soul to the devil in exchange for fame and fortune aren’t new. There’s a new

spin on it here.  There’s a group of friends that sold their souls together.  Once friends, now enemies as some try to survive while others die.

From the PREVIEWS catalog:  “Live fast.  Live forever.  Five friends struggling on the brink of stardom sacrifice everything in a black magic pact that brings them all the wealth and glamour they ever wanted.  Years later though, the ‘glow’ is fading.  But when one of them dies, and they feel a surge of magic rise amongst them, they soon realize that they all share in the power of the glow.  And when a member of the group decides to kill the rest and claim the glow for their own, they suddenly find themselves fighting for their lives.  As they search for the killer’s identity, each of The Forevers must face the macabre reality of the lengths to which some people will go to be adored, and to make certain that the spotlight never fades."

URNE #1 of 5:  A new Frank Cho work, both written and created by him?  That’s enough to get our attention!

From the PREVIEWS catalog:  “A new, original series from celebrated creator Frank Cho (Totally Awesome Hulk, Savage Wolverine).  Full of fast-paced action, Skybourne is Indiana Jones meets James Bond with fantasy elements thrown in.  Cho describes it as ‘one of the most cinematic stories I’ve envisioned.’  The legend of King Arthur is alive and well in modern day  Only one man, Skybourne, can stop the evil Merlin from destroying the world.

ROWANS RUIN Trade Paperback (advance solicit for November 2016): Written by Mike Carey.  Illustrated by Mike Perkins:  Mike Carey is one of a select group of co 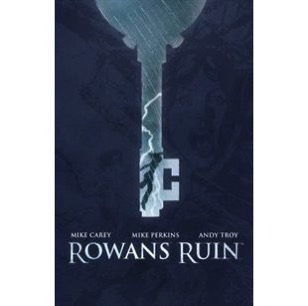 mics writers with serious literary skills, cut from similar cloth as Neil Gaiman and Alan Moore.  When he gets to work on a creator-owned title, it’s alway worthy of your time.

From the PREVIEWS catalog:  “When Florida native Katie is offered a house swap with a girl from Britain, she jumps at the chance to summer at Rowans Rise — a house older than her entire home country.  But then the nightmares begin, which spurs Katie to investigate the history of the house. Sometimes the past is best left alone  Collects the complete, terrifying limited series."