EDITOR’S NOTE:  Last month we started a new feature, looking through the monthly PREVIEWS catalog and highlighting some books we feel are worthy of your attention.  It became a massive task, as there were a large number of books from various publishers that needed to be singled out.  But not an exhausting task.  We feel invigorated and excited about the diversity and creativity currently prevalent in today’s comics.  We also feel that by identifying specific books - - our readers obtained additional insight into the types that appeal to us, and are better able to judge what books would interest them.

Since we’ve already singled out our favorites last month, we are going to pare down that massive list this month and concentrate on brand new titles or series.  That should make the list more manageable.  We’re not going to list something just because it’s a #1 issue or it's a “ rebirth".  We expect the title to bring something new or different to the table, based on what we know about the concept and/or the creators.

ACTION LAB DOG OF WONDER VOLUME 1 TP: Writers Vito Delsante and Scott Fogg.  Artists Rosy Higgins and Ted Brandt. This collects issues #1-3 of the limited series, which we reviewed at BC Refugees in January 2016, and you can read here = http://bcrefugees.blogspot.com/2016/01/pre-order-pick-action-lab-dog-of-wonder.html 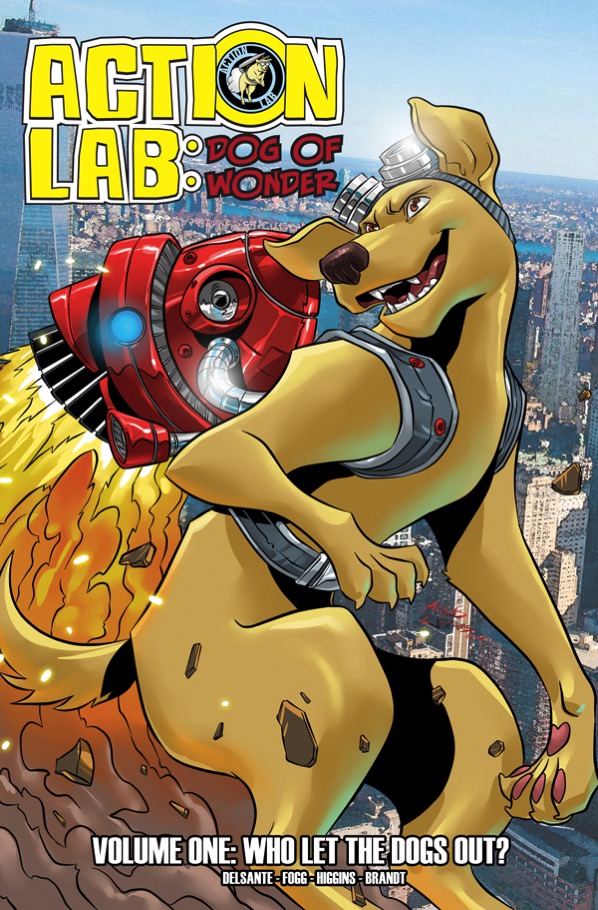 Among the things we said about this series was this accolade:  It’s remarkable to see a debut issue attempt to stretch the boundaries of acceptable subject matter rather than go for the safety of telling a tried and true story about a dog having silly adventures.  It also takes some considerable skill to do so without coming off as preachy or worse-case-scenario offending or disturbing a young reader and/or their parents.  We cannot imagine anyone being bothered by what occurs here.  That’s what makes this such a compelling new title that deserves a large audience across readers of all ages.  The message comes across but in a pleasant, objective and diplomatic manner. Kudos to the writing team of veteran Vito Delsante and newcomer Scott Fogg.

We also posted an interview with co-author Scott Fogg in January, which you can read here = http://bcrefugees.blogspot.com/2016/01/profiles-interview-with-scott-fogg.html

From the PREVIEWS catalog:  “For five years, readers of ACTION LAB comics have wondered who the dog in the logo was . . . now, his story can be told!  Join Percy, the titular Action Lab, as he and his Action Lab League take on the case of rescuing a French bulldog accused of biting a little girl.  Read the book that everyone is taking about."

ALTERS #1: Paul Jenkins writer.  Leila Leiz artist. We’ve been fans of the work of Paul Jenkins for some time. He has a way of 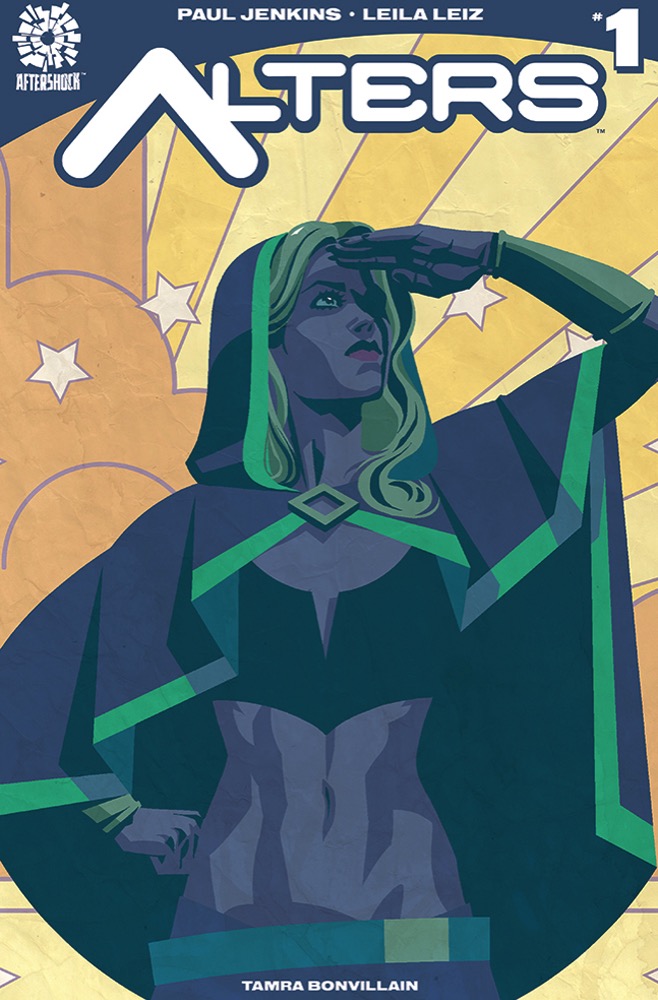 getting into the psyche of characters in a way that makes you view them differently. It’s great to see him active in comics with his own original material. This one promises to be as edgy as ever.

As the world struggles to accept the emergence of a new kind of mutant species known as alterations, or ‘Alters’, a young woman begins her transition from male to female only to find herself also transitioning into a powerful Alter.  Faced with persecution by the multi-powered fascist known only as Matter Man, she will face the world as Chalice — a hero for a new age.  But as Chalice navigates the path to becoming her true self, she must juggle the complications of her civilian life and the responsibilities of her newfound power.

This groundbreaking series — years in the making — begins the saga of a young woman who can only be herself . . . whenever she is not herself."

MIKE WOLFER’S CRYPT OF SCREAMS #1: Writing and art Mike Wolfer.  Wolfer is one of our favorite illustrators with a great e 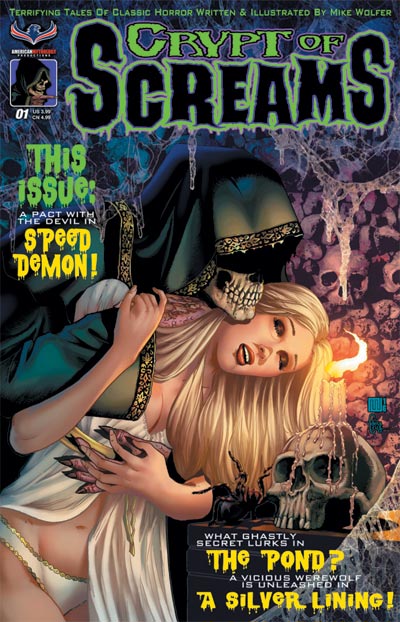 From the PREVIEWS catalog:  “Cult horror creator Mike Wolfer (Friday the 13th, Daughters of the Dark Oracle) unleashes an all-new anthology of terror tales designed to make you scream.  Printed in glorious black and white to emulate the classic horror tales of the 1970s, CRYPT OF SCREAMS will take you where no other modern fright anthology dares to go.

This issue’s tales are ‘Speed Demon’, an Old West shocker of a young man who signs a demonic contract to exact a terrifying revenge, followed by the hauntingly romantic ‘The Pond’, in which a young woman encounters a stranger who will alter the course of her life forever.  Rounding out the horrific trio is ‘A Silver Lining’, a classic shocker of an 18th century mansion, its wealthy inhabitants, and a lycanthropic horror that stalks its halls in search of human flesh.  Prepare to check your sanity at the door when you enter the CRYPT OF SCREAMS.  All stories are written and illustrated by Mike Wolfer, and are for mature readers only. 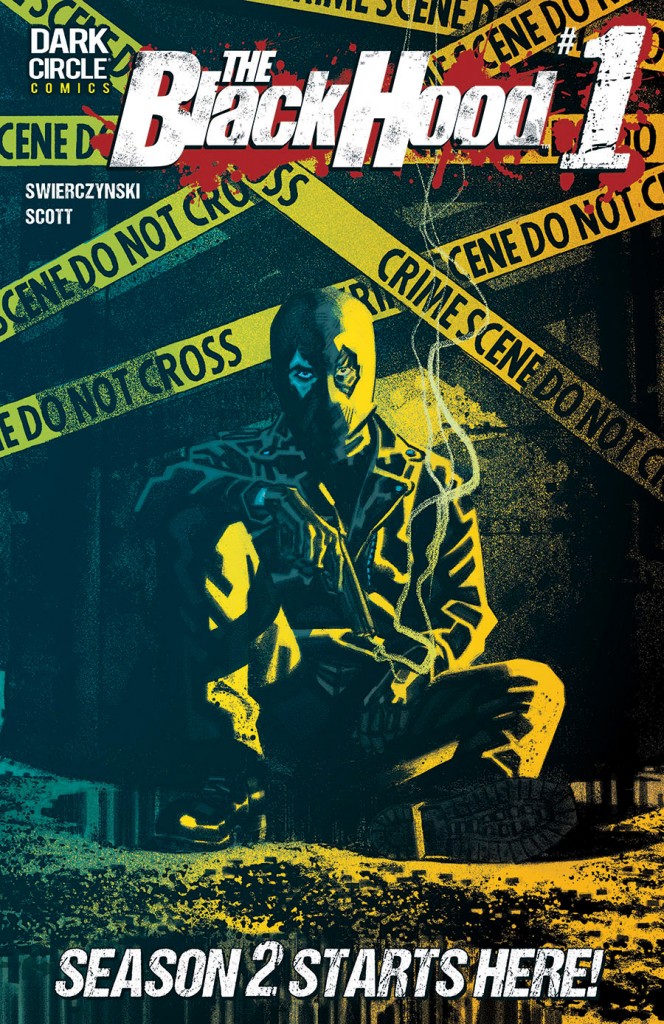 ith no special powers — just a desire to bring criminals to justice.

From the PREVIEWS catalog:  “The Nobody Murders, Part 1.  The acclaimed crime comic returns with an all-new #1 issue, the perfect jumping on point for new readers.  The Black Hood is no more.  Sure, there are rumors that the former cop known as Greg Hettinger is still out there, blending in with the homeless population and emerging only to stop a violent attack before vanishing again.  But the ruthless assassin known as The Nobody considers the Black Hood a loose end, and he’s willing to slaughter dozens to flush him out.  How high must the body count rise before Greg steps forward to face an opponent he can’t possibly beat?  MATURE THEMES."