Book Review: EVEN DOGS IN THE WILD 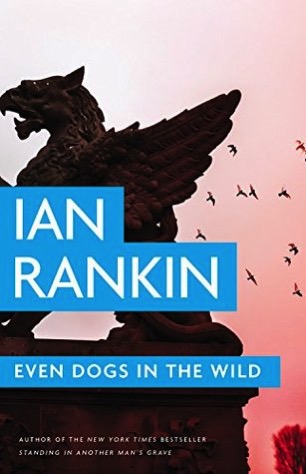 "Detective Inspector Siobhan Clarke is feeling the heat. She's investigating the death of a senior government prosecutor, David Minton, who has friends in high places. When one of their own is killed, the powers that be want answers fast. But Clarke is puzzled: if Minton died in a robbery as everyone thinks, why is nothing missing from his home? The answer may lie not in what was taken, but in what was left behind at the scene--an ominous note.

Malcolm Fox is feeling useless. Shunned by his colleagues because of his past in the Complaints bureau, he's been reassigned to a grunt detail, helping a surveillance team--one that trusts him even less than his own boss does--track a notorious Glasgow crime family. Helping Clarke with the Minton case is the only thing that makes Fox feel like a real cop.

Newly minted civilian John Rebus is feeling restless. Being a cop is in his blood and he's failing miserably at retirement. So when Clarke and Fox ask for his help, Rebus doesn't need long to consider his options. But before he can get his bearings, a call comes from Rebus's old nemesis--"Big Ger" Cafferty. Someone just fired a bullet through his front window--and sent him a note identical to Minton's. The normally unflappable old gangster is on edge, but for the life of him Cafferty can't figure out who he's wronged. And the only man he trusts with his life is Rebus.

As the cases collide, it's up to Clarke, Fox, and Rebus to connect the dots and save their unlikely ally Cafferty, whose past harbors a shocking secret that implicates Minton's friends in an unspeakable crime. Even Dogs in the Wild reunites crime fiction legend Ian Rankin's greatest characters in an explosive story exploring the darkest corners of our desires."
Hardcover, 352 pages
Published January 19th 2016 by Little, Brown and Company
OUR REVIEW:
There's quite a bit of mystery mixed in with the detective work this time, as several crimes share a threatening note but don't exactly fit together. At the root of the story is a standard police procedural with detectives analyzing the slimmest of leads and eventually connecting the dots. There's a little less of John Rebus' speculation and acting on hunches this time - - and he often takes a back seat to the hard work of friend Siobhan Clarke and former adversary Malcolm Fox. It's a joint effort by all three that closes the case.
It's a fresh spin on the familiar John Rebus story where he ends up looking like a genius. After all, he's retired now and was called in to consult on this one.
What hasn't changed is that when reading Ian Rankin the reader never feels like they are reading a simple police procedural. That's because Rankin flavors everything with local color and amazing characters. What makes EVEN DOGS IN THE WILD successful is those complex characters, perfectly realized and each engaging and different in so many ways. Even the villains have deep-seated motivations. Regular Rebus foil and Scotland crime lord Big Ger Cafferty shows a new side as well as heart.There's a decades old crime-against-humanity that's deplorable and at the core of the conflict, involving prominent figures and local government and press cover-ups.
This story really picks up steam in the closing act and hints at a promising future for this series, with Clarke and Fox coming to the foreground and the unforgettable Rebus still helping as mentor.