OPINION: Pre-Ordering, Previews, and the Plight of the Comic Shop

EDITOR’S NOTE:  My love of comics goes beyond collecting and reading. I’m also fascinated by the business side of things.

I’ve offered various interested parties an open invitation to utilize our blog to comment on aspects of the comics business, particularly those related to owning and operating a comic book shop. I know that it’s a real challenge to be an independent store owner these days, and salute those who have chosen that path. Almost every comic shop I’ve visited is owned and staffed by people who are in it for the love of the art form rather than trying to make big money.

Our first guest article (and I hope there are many more) deals with several conditions and limitations of the current business model that provide challenges for local comic shops. I’ve had several discussions on this issue with Ken, and he is the first to respond to my invitation.

In submitting his opinion piece, Ken said “I’m hopeful that criticizing Diamond will help them to realize they need to reconsider some aspects of their business model.  In my experience, no one is more frustrated with Diamond than shop owners but, as stated, they’re over a barrel when dealing with Diamond.  So ultimately little has changed.”

COMMENTARY BY KEN, formerly of From The Booth podcast, and co-founder of Comics Podcast Of The Damned

When it comes to preordering, I’m of two minds.

On one hand, pre-ordering makes all the sense in the world.  For large items of limited runs like statutes, pre-ordering is a must.  If you miss your chance, you’re left to trying to get one on Ebay.  If it was a popular statute and a lot of motivated buyers missed the boat, you’re going to be paying way more than retail.  Pre-ordering also make buying comic books super convenient.  I can never remember the two dozen or so series that I’m currently reading.  Having them appear in my box every week is a time saver and makes sure I get my books even if they sell out on the rack.

On the other hand, pre-ordering almost anything else at a comic shop except the occasional must-have item makes zero sense.  The reason for this is because to pre-order anything else, you generally have to buy the Previews book.  The Previews book is not cheap. It was $4.50 the last time I checked.  Comic book readers are generally on a budget and balk when a $2.99 comic goes up by a dollar.  Asking them to buy a book that contains information easily found on the Internet just seems silly.  If they look it up on the Internet, there are also generally independent reviews and previews that help steer people either towards or away from something they’re not previously familiar with. 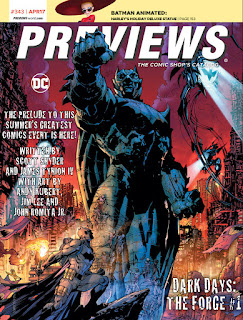 Previews is out to sell the items in the book and for that reason, it is more biased.  Every ongoing series is going to begin a great new character arc for its titular character!  Every statute looks like it was molded as if by the hands of the gods themselves!  Every Funko is a must-have!  While the presentation is entirely understandable, it’s often not helpful.  It’s a bit like paying for a non-narrative book filled with propaganda.

Also, there is often no incentive to pre-order.  Some comic shops do offer discounts for pre-orders and to those that do, I salute you.  But many, many more do not.  Pre-ordering something, DVDs from Amazon; plane tickets; or a new music album generally gets you a discount.  Even for the shops that offer a discount, it generally doesn’t exceed the $54 you’ve spent on Previews catalogs that year.  I get that a lot of shops are stuck between a rock and a hard place.  The discounts they offer cut into their percentage, which is often slim to begin with.

Previews is published by Diamond.  For those that don’t know, Diamond is the only comic book distributor in North America.  It’s a monopoly and retailers are forced to do business with it if they want all the thing that consumers expect a comic store to have.  As with most monopolies, Diamond hasn’t changed with the times.  Why would it?  If you don’t like their terms there is nowhere else to go.

But even monopolies aren’t immune to new technology.  Just like the light bulb came out of nowhere and put the whale oil industry out of business, the Internet is slowly killing Previews.  A lot of the items you see in Previews you can find on Amazon.  You can get most of the books you find in stores through Comixology, also owned by Amazon.

An important point to note about these competitors is that they are all outside of the ambit of your local comic shop.  Most local shops don’t buy enough from Diamond to qualify for major discounts that they can use to compete head to head with Amazon.  The bargaining between Diamond and shops is inherently one-sided when the shop can’t use any other distributor service.  The only thing that hurts Diamond hurts us too: when comic shops close their doors.

Although the number of comic book stores seems to have gone up last year by about 3.8%, many people in the industry are waiting for a long overdue correction.  As Comixology expands and Amazon offers you the same item in Previews for 15% off with free two day shipping, the reasons to go to your local shop are diminishing.  I don’t begrudge the Internet its competitive advantage.  I just wish Diamond would wake up to the fact that despite its 20-odd year monopoly, it can no longer afford to act like it is immune from competition.

Some people say they pre-order everything through their local shop because you need to support your local comic shop.  And I totally get that.  Comic shops are safe places for people who plunk down good money week after week to read picture books about their favorite characters.  It’s a hardcore group.  It’s a clubhouse on the weekends and a breath of fresh air on Wednesdays.  It’s a place to argue about authors and artists, get unabashedly excited about upcoming books, and bitch about the last crossover which was just too lame.  But ultimately, it’s a bad business model as currently constructed.  There were people who insisted on buying albums at Virgin Records or Suncoast but that didn’t save the model.

Previews represents the comic book store model at its worst.  Pay for the book, pay full price for the item, and maybe, make a special trip out to pick it up.  I don’t blame the owners, most are good people who loved comics so much that they dedicated their career to it.  But the charity from a proud few “pre-orderers” isn’t currently enough to keep Previews relevant and their numbers are dwindling.  I only worry that today its Previews that is irrelevant and tomorrow it will be the rest of the comic shop for the same reason.