EDITOR’S NOTE:  Yep, it’s a new month and that means deciding what to read two months from now.  Because I like books on the fringe more than the standard, regurgitated superhero fare - - I need to pre-order to make sure I can get what I want.

That doesn’t mean I’m a superhero snob.  I still enjoy a well-told story in any genre, and still read superhero stuff from both Marvel and DC.  I’m just picky as hell, and not likely to stick with a book on a continuing basis. If I’m not thoroughly engaged after one or two story arcs, then I drop it.

Here’s a title that I’m going to give a chance to win me over.  I’ve got a feeling that this one will sell out at the comic store level.  So if you want to join me in exploring it, then I encourage you to pre-order your copies.  Read on . . . 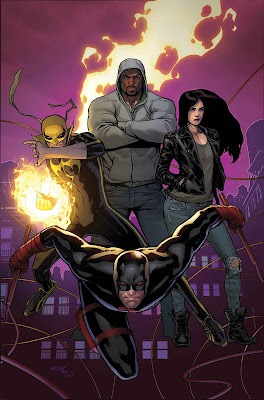 The promotional material on the new version of THE DEFENDERS doesn’t have a lot to tell, just hints at a possible story line. Doesn’t matter.  I’m willing to invest the $9 based on the strength of the creative team.  Marquez’s art is compelling, and I expect no less from him on this new book.  While I don’t love everything that Bendis does, he’s at his best when he’s writing about the edgier, less powerful heroes - - and that’s exactly what we have here.

With two books in the same month, and the first issue an expanded size - - I’m guessing that Bendis needs two issues to set the framework for the story he’s going to tell.  It’s interesting that the team line-up mirrors the Marvel Netflix heroes (who will also band together to form the Defenders in a new Netflix show debuting later this year). How closely will Bendis hew to the continuity established in the television show?

I wondered the same thing when Bendis revived the Alias series as JESSICA JONES last year. Surprisingly, that story line and characterization was more in line with Marvel canon than Netflix canon, and benefited from that.  If you haven’t read it, wait for the eventual trade paperback and check it out.

We’ll see what Bendis does with Daredevil, Jessica Jones, Luke Cage and Iron Fist in this book, and how and why he brings them together.  I’m picking this one up on faith alone.  Guess that makes me a more selective True Believer, huh?

You can watch a teaser trailer for the television series here . . . . 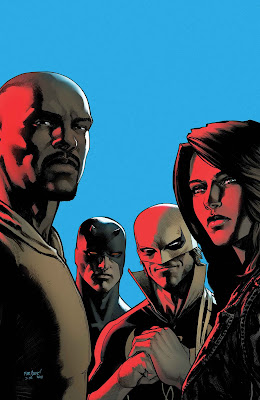