Addition notes and comments on the 2017 Valiant Summit

EDITOR’S NOTES: Valiant Entertainment has been hosting an annual Summit Event each year since 2015 to announce their publishing plans for the entire year.  The 2017 Event was, for the first time, a live video stream from host HyperRPG studios in Los Angeles, CA that could be viewed on the twitch.tv website.

I watched the web stream, hoping to catch some news on the upcoming Ninjak television series and the Harbinger and Bloodshot feature films.  However, the event was dedicated solely to publishing news — of which there was plenty.  This was detailed in a neat press release summary, which was made available to BC readers in our last post.

If you haven’t guessed by now from reading my blog, I’m a big fan and supporter of what Valiant is doing!  What follows are some additional notes that I made on the live event . . . . . 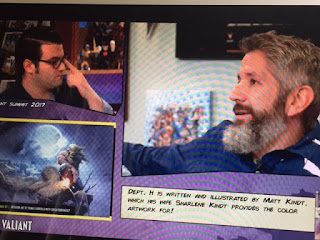 Watching this presentation was similar to having a close-up front row seat at a comic convention panel.  The live streaming video was hosted by Valiant Marketing VP Hunter Gorinson, with CEO and Chief Creative Officer Dinesh Shamdasani and Editor-In-Chief Warren Simons serving as the major commentators. Several of the series writers were interviewed and some exclusive artwork was showcased.  The video stream utilized a split screen presentation, which was very effective.

One of the most impressive things about the Valiant Universe is how intricately plotted and intertwined it is, with no loose ends (unlike some other bigger publishers).  When Valiant creates an epic event, they always make it worthwhile for readers without over-saturating the number of crossover issues or over-extending the duration. CEO Shamdisani revealed that they work very far ahead, at least one year at a time. The recently featured VALIANT ICONS is their notice that they plan to evolve beyond the beginnings of 2012, when Valiant was re-introduced to the comics world. Shamdisani said that 2016 was the year to expand through the introduction of brand-new characters.  2017 will be the year to return all the established characters (X-O Manowar, Shadowman, etc.) and continue the expansion of new role-players in the Valiant Universe.

There is a very epic nature to these announcements. During the various discussions, frequent references were made to both Star Wars and The Lord Of The Rings as inspiration for some of the creators to create new tales worthy of comparison to those two landmark works. 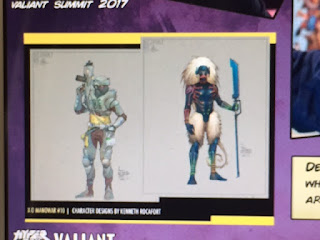 Writer Matt Kindt was interviewed, and stated that “I’m a big fan of barbarians. Just getting X-O back to barbarian mode was something I was really excited about.”  The series is already plotted out for five story arcs, and Kindt doesn’t know what the last issue will be yet.  X-O starts over as a simple farmer on a totally alien world, and progresses through solider to general to emperor.  Issue #10 will be the first stand-alone issue, featuring bounty hunters (inspired by Star Wars) and fall in-between the Emperor and Visigoth story arcs.

BRITTANNIA Sequel: WE WHO ARE ABOUT TO DIE

Britannia was the first Valiant series to feature all brand-new characters, and went through ten printings.  This new arc returns the same creative team and introduces a new female gladiator character.

This new limited series was described as “Lord Of The Rings for the Valiant Universe.”  In the interview, writer Matt KIndt spoke of that inspiration and his “big scope” plans for Rapture. A fan of Lord Of The Rings, Kindt said he was even more impressed by Tolkein’s Silmarillion, which detailed all the back-story and world building behind the LOTR universe.  Kindt aims to “make the Deadside a real place” in Rapture beyond what Ninjak, Shadowman and Punk Mambo have explored before. 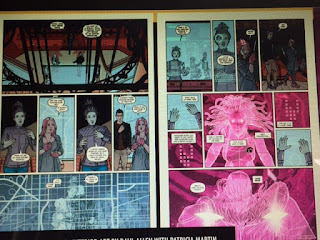 The Valiant Summit Event introduced Eric Heisserer as the screenwriter for both the Harbinger and Bloodshot film adaptations, which is impressive considering that Heisserer was nominated for an Oscar for his work on the script of science-fiction film Arrival.

While working on the scripts for Harbinger and Bloodshot, Heisserer came up with some ideas for the development of Livewire and received a green light to work up a comics series.  Livewire takes some misfit psiots from the Harbinger Foundation and finds ways to best utilize their powers working as a team.

It was announced that Livewire is positioned to be a break-out character the same way as Faith in 2016.  The Secret Weapons limited series will also be part of Valiant’s Pre-Order Editions, offering four 48-page special editions with 8 pages of extra content. Orders need to be placed for the Pre-Order bundle with local comics shops before April 27.

FAITH AND THE FUTURE FORCE

During the announcement for this new series, writer Jody Houser was interviewed. She mentioned the creation of a rogues gallery of villains leading up to Issue #12, when the new series will debut in July and involve time travel.

This will begin in August 2017, and I didn’t learn anything more about it from watching the Summit than the little bit that Valiant teased in their press release.

The idea of Bloodshot actually having a family is something that Jeff Lemire is most qualified to write about, and I’m looking forward to this new story line. As editor Simons stated, Lemire “is one of the most accomplished and talented plotters I’ve ever seen.” 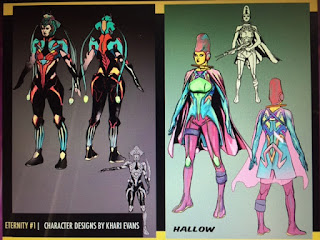 Divinity has been a big success at Valiant, with the first series going through eleven printings. Divinity II had five printings. Divinity III: Stalinverse has been selling out.  But Valiant wanted to make sure that readers understood Eternity is not intended to be Divinity IV, even though the story of the Russian cosmonaut returning to Earth was the launch point for this new limited series.

Eternity will be an entirely new story in a pocket universe. Eternity is a place, perhaps the place where Divinity receive his powers. In the words of Matt Kindt, he “wanted to capture a Jack Kirby-like vibe for the Valiant Universe”.  In Eternity, Divinity has a child, who vanishes, and he goes back to the unknown universe in search.

It’s an exercise in work building for Kindt, who has plans for 25 new characters and more unique aspects to the Eternity pocket universe.

So far, Ninjak has been built up as a solo character.  New writer Christos Gage will reveal that Nijak is not the only ninja to work for MI6 - - he’s actually the eleventh in a line that stretches back to WWI. These ninjas were identified by alphabetic designations from A through J.  Someone is now killing them off and Ninja-K investigates.

Ninja-K promises to be a more espionage-driven take on the character. Gage said that he’s “such a fan of what Matt Kindt did - - why retread the same ground?”

This is the point in the video stream that everything cut out, and I was shut out from viewing anymore.  This was the only part of the Valiant Summit that annoyed me, and I doubt that they are responsible.

The Summit was noted to be a one-hour broadcast. The actual length was one hour and thirty seven minutes.  Everything ran smoothly on the steam I watched until after the one-hour mark, when the replay became choppy and the screen would often freeze for several seconds before resuming.  I tried to get back to the live stream by clicking pause and then play and it worked once. On the second attempt, a commercial popped up.

Eventually, the video stopped entirely to be replaced by a screen message that said in order to continue watching I needed to be a HyperRPG subscriber.  That annoyed me enough that I shut it down.  I don’t know if the subscription was free or not — I was just disturbed by that unfriendly tactic.