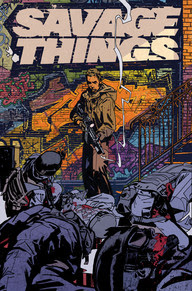 The premise here is not new, and will be familiar to anyone who’s watched a fair share of action movies and television shows or has read enough thriller novels:  young children, either orphaned or abducted, are taught to become assassins by covert government organizations or subversive groups.

While it’s a recurring theme, it can still be entertaining and engaging when the creative team manages to tell a good story. Based on the first issue, that appears to be exactly what readers are in store for with SAVAGE THINGS, a clever blending of horror within a modern spy tale.

The first issues shows just enough of the background and training of the main character, known only as Abel - his given name within the Black Forest school of killers working for the government — to let readers know how dangerous he is. Apparently, at some point he left the organization and operates on his own.

The opening pages, that reveal him to be a young firebug, begin with a shocking retelling of his recruitment day.  The present story begins twenty-five years later, when a bloody message at the scene of a massacre prompts his trainers to enlist his services.

Much better than the last Bourne movie, SAVAGE THINGS could represent the new Vertigo book that I can follow. Don’t be afraid that this won’t catch hold amongst the myriad of books on comic shop shelves. It’s planned as an eight-issue mini-series; and I expect Vertigo to support a full run.

STORY:  I have to admit I’m a fan of Justin Jordan’s impressive body of work.  He can be very blunt and brutal at times, and always provides a few shocks or surprises for readers - of which there are plenty here. I’m withholding a point simply because the storyline treads familiar territory.  2 POINTS

ART:  This is my first exposure to Moustafa’s art. His style is simple and fluid, and especially good with facial expressions and clearly defined action scenes. The rest of the art team do an admirable job of enhancing the art with color, shading, and dark lines.  2.5 POINTS.

COVER:  The cover illustration gives a good indication of the type of story within the pages. However, John Paul Leon’s interpretation of the main character is not close enough to his depiction by Moustafa, which takes away from the power of the image. 1 POINT.

READ AGAIN?  Yes. Especially if you’re going to pick up the next issue and follow this one. 1 POINT.

RECOMMEND?  Yes. especially if you are looking for a good action/adventure story that doesn’t involved super-powers. 1 POINT.