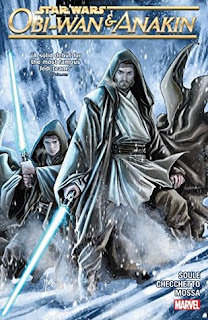 Before their military heroism in the Clone Wars, before their tragic battle on Mustafar and many decades before their final confrontation on the Death Star, they were Master Obi-Wan Kenobi and his young Padawan, Anakin Skywalker. Now join them a few years into Anakin's, "chosen one" training. Teacher and student have grown closer over time, but it's been a difficult road. And things aren't about to get any easier. In fact, when they're called to a remote planet for assistance, the pair may be pushed to their breaking point. As they find themselves stranded on a strange world of primitive technology and deadly natives, will they be able to save themselves? When war breaks out around them, master and apprentice will find themselves on opposite sides!

Good background story on the early days when Obi-Wan was training young Jedi Anakin Skywalker. Already at this point, Anakin was questioning his role, not sure his personal values and mindset were right for the Jedi order. A situation occurs that causes both teacher and student to question the correctness of things and what is right versus what should be done or what has to be done. Even Palpatine gets into the action early, as he tries to subtly persuade Anakin to his way of thinking. I enjoyed this and thought that Soule did a fantastic job of keeping these characters true to their filmic portrayals while telling an engaging, and revealing original story. This reprints the first five issues of the monthly comic book series.

STORY:  Stays true to canon, and tells an engaging story with some nice reveals.  2.5 POINTS.

ART:  Close-ups and body language are done very well. However, the battle scenes are a little confusing and sometimes make it hard to determine exactly what happened. 2 POINTS.

COVER:  All the covers and some of the variants are featured. Nicely done.  1.5 POINT

READ AGAIN?  Yes. Especially if you want to see more of these compelling characters. It’s a nice compliment to the Darth Vader series. 1 POINT.

RECOMMEND?  Yes. Especially if you are a Stars Wars fan — you will want to have this. 1 POINT.

TOTAL RATING: 8 POINTS. Worth picking up.