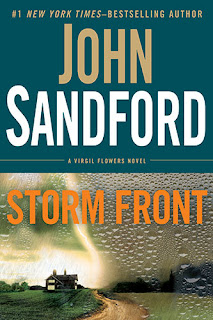 There are plenty of books by John Sandford just waiting for fans of the crime/detective/thriller genres to pick up.  I’ve been noticing them every time I visit a bookstore.  He’s one of the authors I added to my mental list of writers to explore. I’m glad I finally crossed that off my bucket list, after finishing STORM FRONT, a novel featuring Sandford’s Minnesota detective Virgil Flowers.

This is the seventh book in the Virgil Flowers series, which shares a connection to the Prey novels featuring Lucas Davenport and the Bureau of Criminal Apprehension (BCA), who they both work for. Flowers is a thoroughly engaging character, with plenty of idiosyncrasies. I’d love to learn more about him, and will have to seek out some more novels featuring Virgil.  He takes a back seat to the story here, as there is a wide assortment of interesting and peculiar characters.

The story centers around the plight of Elijah Jones, a noted professor, minister, and archeologist involved in an Israeli dig where an important relic is unearthed. Jones steals the stone, inscribed with revelations from the time of King Solomon, and hightails it back to Minnesota where he hopes to turn it over to the highest bidder.  Flowers is assigned to assist the Israeli cop in tracking down Jones and recovering the biblical artifact.  The story becomes more complex and engaging when readers learn the current condition of Elijah Jones, his reasons for his actions, and his plans for the money.

Sandford writes fluidly and his writing is easy to follow and very entertaining.  Every character is fully realized and brought to vivid life on the pages.  Those include a Mossad agent, a Turkish torture agent, a second Turkish hit man / bag man, a sensationalist TV archaeologist, a rival professor of ancient mysteries, a conniving Lebanese college student, the Hezbollah, secretive government agents, and a beguiling vixen who specializes in fake antique lumber.

As the story unfolds, it takes many twists and turns and swerves in unexpected directions.  Sandford orchestrates the chaos marvelously.   A good read.