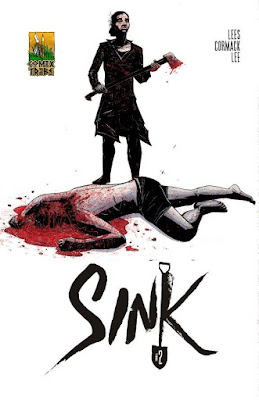 There is nothing I like more than a great horror comic.  While I avidly read comic books in all genres, horror comics have always been my favorite. Comics are a natural medium to tell a compelling horror tale. The ability to combine words with images, and utilize shading and color can really enhance the fear and excitement.

The opening panel of “The Door At The End” in SINK #2 reminded me of the classic scene in THE EXORCIST film (1973) where Father Merrin stands outside in the rain on a dark and stormy night, contemplating the residence of terror he’s about to enter.  In SINK #2, Sharon the “cleaner” in a similar dark and stormy night gets her first look at the location of her next job.  The art tells us everything we need to know.

It’s also the reader’s first look at main character Sharon, an independent contractor who is sardonic, sinister, dangerous, and all business. A three-way liaison has gone wrong, and there’s a murder victim to dispose of.  Just another routine work day for Sharon, until she departs the scene of the crime and the bodybag in the back seat of her car sits up.  What follows is an endearing heart-to-heart conversation between murder victim and Sharon. 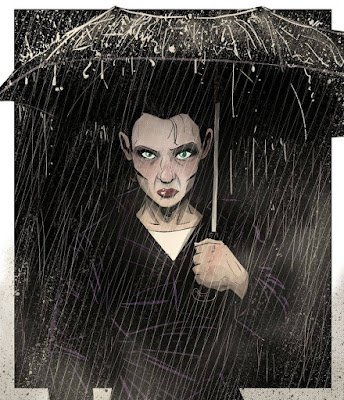 During the crowd-funding days of SINK, I was on board and looked forward to receiving the title. At the time I assumed that the killer clowns in the spooky blue van as well as the vigilante avenger in a full-head fox mask would be regular characters.  While a fox does make a quick cameo appearance in SINK #2, there are no clowns in site. However, I’ve been informed that they may return in a future issue.

The main character of SINK is neither clown nor vigilante.  It’s the town of Sinkhill, a seemingly fictional borough of Glasgow, Scotland.  It’s a creepy place of shadows, secrets, and shady residents - - similar to how Gotham has been portrayed in some versions of Batman.

Every story will feature another terror-filled tale that occurs in Sinkhill.  All the better.  Looking forward to the remaining three issues.  Keep it going, gentlemen. 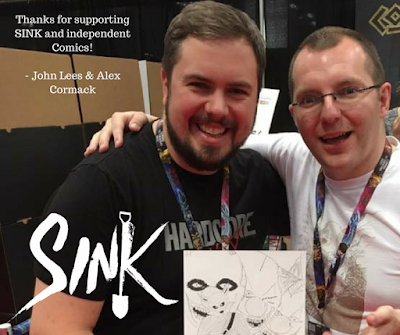 •Remember Image Comics’ CHEW #1 from 2009?  That title surprised everyone with it’s excellence and became a hot item, selling out of the first three issues quickly. Issue #1 went through four printings.  SINK, published by smaller independent ComixTribe, did not have the same size initial print run as an Image comic does, and completely sold out of it’s 6,000 copy print run at both Publisher and Distributor levels. For the first time in company history, ComixTribe has gone to a second direct market printing for the first issue. The new printing features an all new Killer clown cover by Alex Cormack, due out in December.  I expect this to sell out as well and advise you to pre-order a copy. You won’t regret it.

•SINK and ComixTribe are also proudly participating in the Local Comic Shop Day event November 18, with THE BLACK BAG, which features Limited Edition BLACK Variants of SINK #1 & #2, along with other ComixTribe exclusives. Don’t expect your local comic shop to be a participant because they need to make an investment in the event and not every single comic shop is ready to do so. Don’t get disappointed. Call your local shop now to find out if they are going to feature this.

•SINK #2 is close to selling out as advanced Diamond re-orders have claimed nearly all available publisher copies. If there is a second print on #2, we'll let you know. In the meantime, you better get to your local comic shop fast to pick up your copy if you don't want to miss out.

STORY:  Love the twist ending. Plus, this is not your typical horror comic story.  3 POINTS.

ART: This would not be the great story that it is without the awesome images. 3 POINTS.

RECOMMEND? Horror comics are not for all readers. But if you enjoy them, you don’t want to miss this one..  One-Half POINT.